Communities come together to build boxes of hope 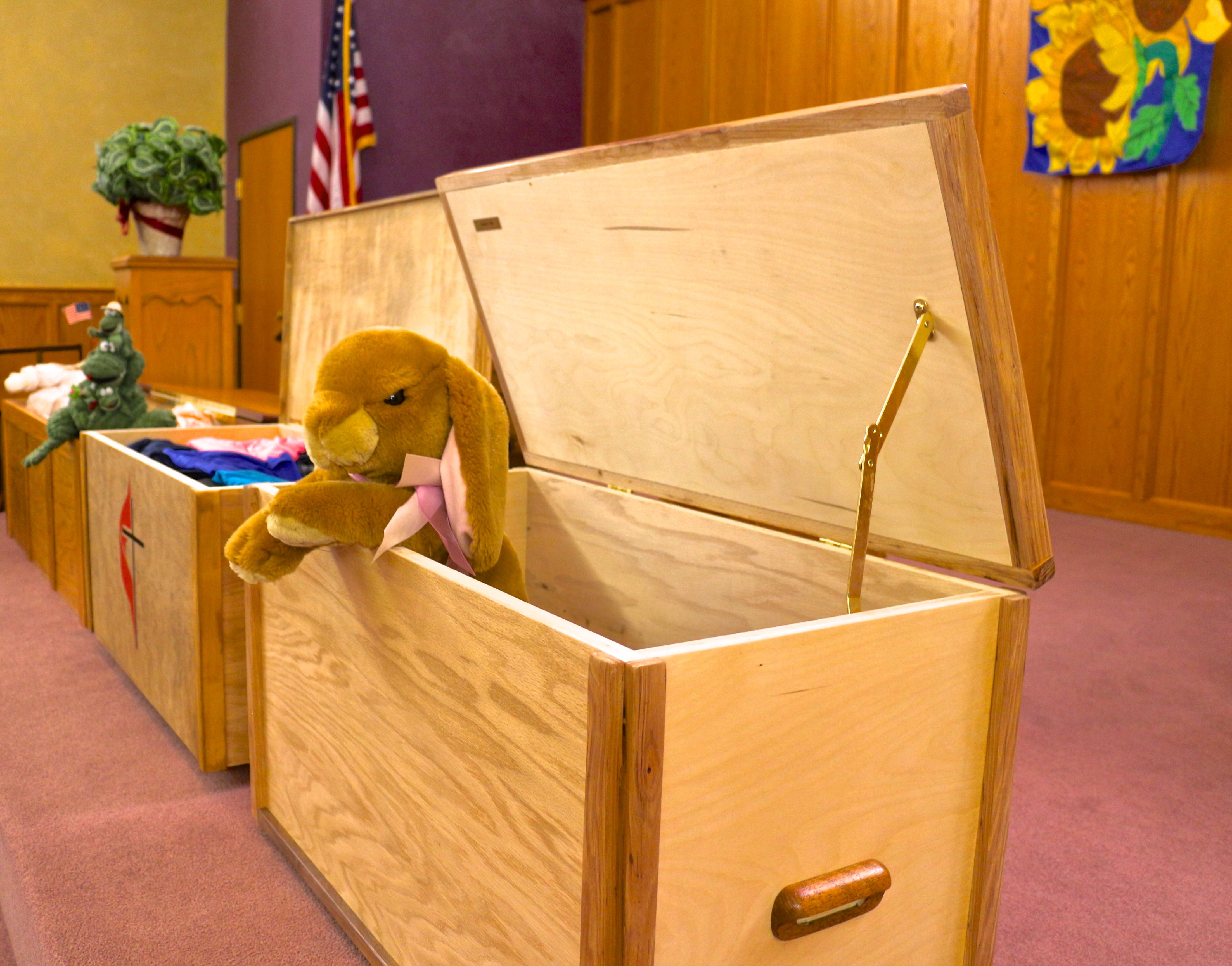 This toy box, whose first item is a stuffed bunny, will be sent to a center for troubled youth as part of the Elm Creek, Overton and Williamsburg UMCs’ (in Nebraska) toy box ministry.

In a 15-minute drive from Kearney, Nebraska, you will find a small town called Elm Creek with a population of 929 (2012 census information). On the town’s main street are a grocery store, a diner and an antiques store. However, there is an array of surprises at the end of the street. Elm Creek UMC sits on the right side of the street next to a foreign conflicts veterans memorial commemorating the heroes of the town’s past, but there is something more special to the charm of this town.

The “toy box” project/network is a remarkable activity the Elm Creek congregation began, and then included Overton and Williamsburg. The toy box project/network is an idea that was born from Pastor Dennis Wheeler’s call to ministry, as a response to his grandson’s survival at birth. “I felt I had to honor my grandson’s survival, as he almost did not make it. But it was a blessing we all had received and I felt I had to give a payback to God,” said Wheeler.

Wheeler, with previous carpentry experience, built the first toy box for his grandson as a sign of honor and hope. Later, after finding it spiritually rewarding, he started attending licensing school and continued making more boxes for families in his local community. “In small towns everyone is your family,” he said. 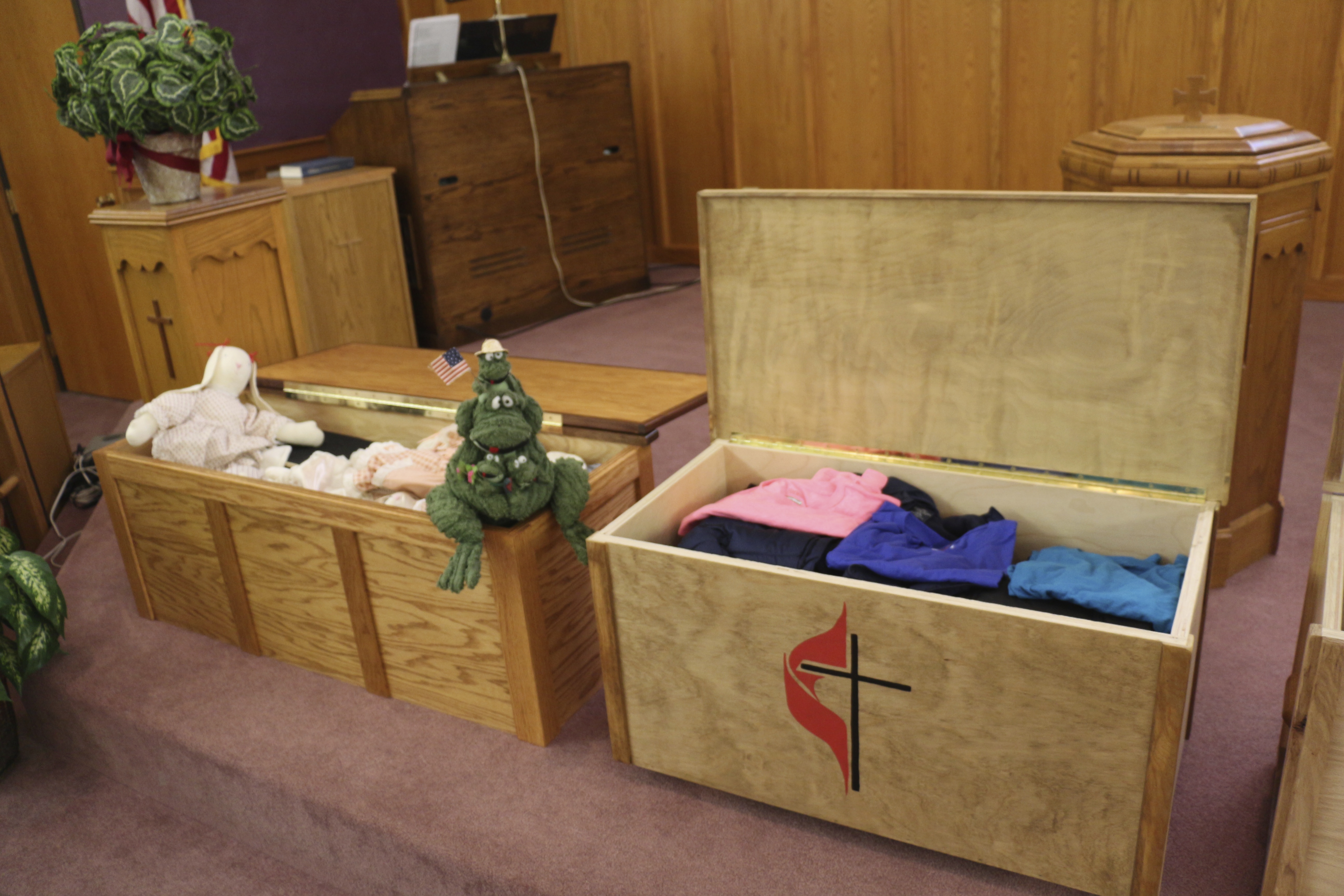 “One of the boxes was for a family that had adopted children. Unfortunately their adoptive mother was dying of cancer and she used the box as a gift for the children after her passing,” said Wheeler. She filled the box with personal belongings and letters for their children to be opened on the occasions of their 17th and 19th birthdays, graduation ceremonies and even for their wedding day. This was indeed heartbreaking, but we were glad we were part of it,explained Wheeler.

Later on, the idea of the toy boxes made their way to Omaha, where the first communal box was hosted. “Hosting” a toy box entails mobilizing the box through several churches to collect toys, goods or clothing for children and teenagers from families in need or to give to orphanages. Many of the boxes continue to rotate from participating church to participating church; others remain stationary in designated congregations with the goods dropped off to fill the box.

Over three-and-a-half years, 40 toy boxes have been distributed across the state of Nebraska and to churches in Florida, Arizona, Kansas, Iowa, Missouri and South Dakota. “We usually try to deliver the boxes as a congregation. We take a van, load it up, deliver the boxes and be part of their service,” said Dave Mierhead, Overton UMC and board of trustees member. Members of the Elm Creek, Overton and Williamsburg UMCs have joined forces and collected many goods for the content of the boxes. 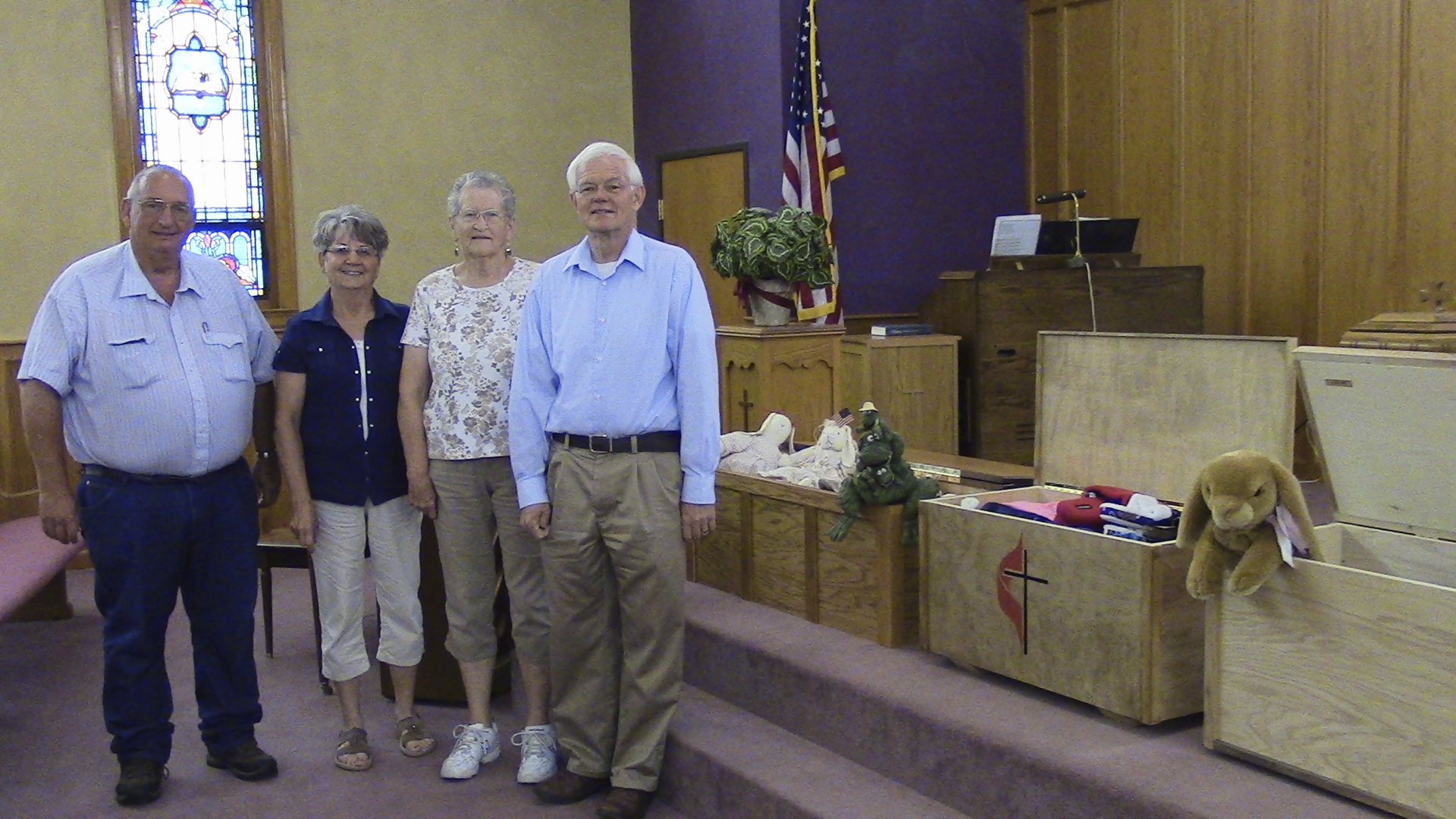 Every single toy box has a specific story and each is unique in nature due to the materials, collaborators and destiny of each:

“As a single drop of rain falls, the drops gather and form a puddle, the puddle of understanding. The puddle grows and flows unto a small creek, the creek of kindness. The creek combines with a river — the river of God’s love,” is Wheeler’s analogy of the ministry. Every box that has been distributed has an engraved plate on the inner lid to encourage other churches to host one of the boxes and distribute the goods collected. The idea is to follow the path of the rain drops into the creek to combine with others’ gifts and become the river of God’s love of giving, concluded Wheeler.