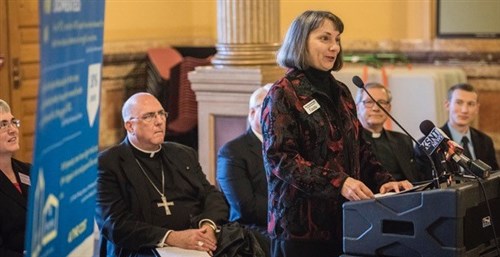 From the Topeka Capital-Journal:

Leaders of Catholic, Lutheran, Mennonite, Episcopal and United Methodist denominations converged at the Statehouse yesterday to offer religious, financial and moral arguments for abolition of capital punishment in Kansas.

The faith group acknowledged strong convictions and deep passions raised by political consideration of the death penalty as well as suffering of families made victims by heinous crimes, but they also put forth the proposition that state-sanctioned execution conflicted with God’s message of forgiveness, redemption and reconciliation.

The Rev. Kay Scarborough, Topeka district superintendent with the Great Plains Conference of the United Methodist Church, said citizens of Kansas were diminished when the state punished people by execution.

“It denies the power of Christ to redeem, restore and transform all human beings,” she said. “We believe all human life is sacred, created by God, and, therefore, we must see all human life as significant and valuable.” 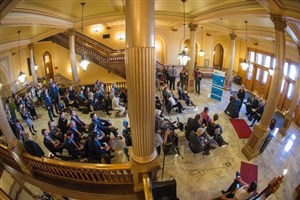 Though the death penalty remains a point of debate, there has been a growing consensus among faith traditions in favor of ending capital punishment. Years of theological discourse, coupled with problems and injustices persistently plaguing capital punishment that have received increased attention, have resulted in more people of faith calling for repeal of the death penalty in Kansas and nationally.

The Rev. Kay Scarbrough spoke at the event, encouraging Christians to pray for wisdom and courage for our legislators to make these difficult decisions and lead our state, and to pray for peace and healing for all those involved in violent incidents. Scarbrough referred to the United Methodist social principles on the death penalty and restorative justice. 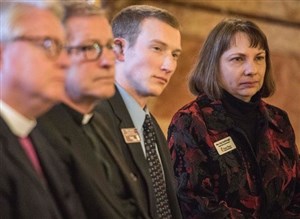 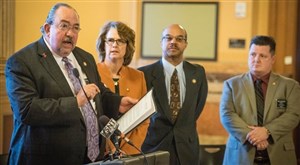 The Kansas Coalition Against the Death Penalty is a not-for-profit corporation organized for the purpose of promoting public education about capital punishment and disseminating information about the death penalty and the effects of executions. Rev. Dennis Paschke, senior pastor at Holton UMC, serves on the KCADP board of directors.

Photography provided courtesy of the Kansas Coalition Against the Death Penalty.