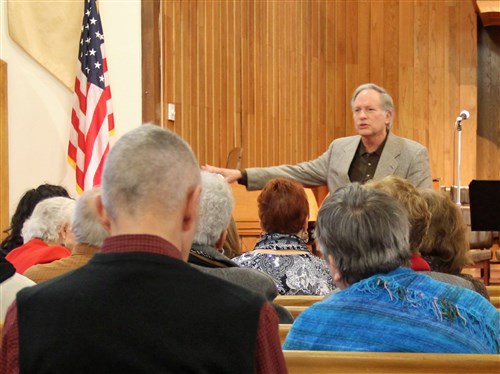 John Mackiel, who serves in the education administration at the University of Nebraska-Lincoln, talks about poverty during a breakout session at the annual ecumenical legislature day at Christ United Methodist in Lincoln.

United Methodists – in fact, all residents of Nebraska – can’t afford to sit on the sidelines with so much work to be done to ensure social justice for all people. That was a common theme shared by presenters at the Nebraska Ecumenical Legislative Briefing on Feb. 14 at Christ United Methodist Church in Lincoln.

The one-day conference drew people from southeastern Nebraska together to discuss such weighty topics as advocacy, poverty, human trafficking, health care, children’s issues and immigration, among others. The event, in its 40th year, was sponsored by the Great Plains United Methodist Women and ecumenical partnership groups concerned about educating the faith community on issues before the Legislature at the start of the 2015 session.

Ruby Thelander, who attends South Gate United Methodist Church in Lincoln, has helped lead the annual day of workshops and discussion nearly every year since the beginning. She started the event in 1975 when she served in a role known then as Christian Social Involvement chair.

“It started as a spring event for United Methodist Women,” Thelander said. “We decided people needed to know what the Legislature was doing.”

Participants started this year by gathering for a brief time of worship, during which they were challenged to follow the example set by midwives Siphrah and Puah recounted in Exodus 1:15-21. The women didn’t follow through on the Egyptian Pharoah’s orders to kill Hebrew boys at birth out of their fear of God.

“It was, perhaps, the first recorded incident of civil disobedience,” Carol Windrum, director of the Micah Corps internship program, which helps young adults link their faith with activities that foster social justice, told the crowd of more than 200 people. 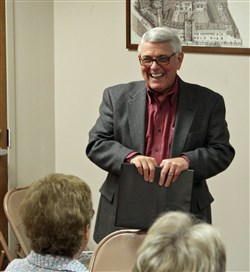 Larry Ruth, with the Nebraska Uniform Laws commission, shares ideas of how to advocate for a variety of social justice causes during a breakout session Feb. 14 at ecumenical legislative day in Lincoln, Nebraska.

One way to get active is to advocate for a cause you believe in, said Larry Ruth, with the Nebraska Uniform Laws Commission. Ruth served as facilitator of one of 10 breakout sessions, with his focusing on providing useful tips for lobbying efforts. He started his presentation with a reminder of the five freedoms noted in the First Amendment.

“You can go to the Legislature and work for change,” Ruth told the standing room-only crowd that was packed into one of the church’s education rooms. “You’re not doing anything slimy, dirty or crooked. It is part of the law.”

Ruth provided tips for people who want to lobby lawmakers in Nebraska’s unicameral, nonpartisan Legislature. Among his tips were having real-world stories that illustrate the issue for which you are addressing the legislator, being persistent by working within the system, not burning bridges when debates or questioning becomes heated, using language carefully and being well prepared – even by visiting the meeting or hearing room prior to actually sitting down with an elected official or staff member.

“Advocating is a time-honored right noted in the Magna Carta, and I believe it is a Biblical admonition,” Ruth said.

Ruth said perhaps the most important tip, however, is to start lobbying efforts prior to the Legislature begins its annual session. Actually, that effort needs to start on Election Day.

“If you start lobbying at the start of the session, you’re too late,” he said. “The interest really should be in whom you put in the Legislature. That means getting involved in campaigns.”

John Mackiel, who serves in the education administration at the University of Nebraska-Lincoln, used his breakout session about poverty to link the downward spiral families face related to poverty with a lack of educational opportunities.

He argued that by not providing children with equal access to education, the deck gets stacked against families – often for generations.

And far too often, citizens don’t understand the complexities of the issue and the inequality that exists.

“Public education reflects society,” he said. “We give a lot of rhetoric to this subject. We need to make more decisions based on research.”

And far too many people sit on the sidelines instead of getting involved to help improve the situation for children.

“We tend to ask ‘did we know’ when we should be asking ‘should we have known,” Mackiel said.

He equated sitting silent on the issue to being involved in the “collusion” of the status quo.

One person who can’t be accused of sitting idly by is Tori Osler, a junior at Nebraska Wesleyan University. She helped with the opening worship service by taking part in a short skit and by performing the Kari Jobe hit song “I Am Not Alone.” And the Elsie, Nebraska, native has been involved in Micah Corps since 2012.

“I've always been interested in politics, Osler said. “I feel we're all called in our own way to strive for peace and social justice.”

At one church, while leading discussions about the topic of immigration, Osler and her colleagues were confronted by a woman who disagreed with what they had to say. Osler said the woman stood up and started yelling at the Micah Corps interns.

“We asked her to talk to us after church,” Osler said. “Afterward we listened to her. That's what has to happen is listening. We don't even have to come to consensus. My version of the truth may not be the right one. But it's important to respect others.”

Osler said she intends to stay involved as a part of practicing her faith.

“Social justice is my passion,” she said.