Confirmation students learn what it means to be Christian, United Methodist 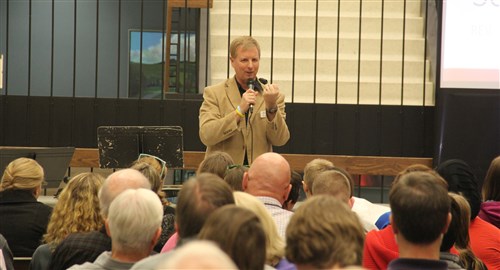 The Rev. Bill Ritter, superintendent of the Blue River District, preaches during the
closing worship of the confirmation rally Feb. 14 at Nebraska Wesleyan University
in Lincoln, Nebraska.

“You are loved. You are accepted,” the Rev. Bill Ritter, superintendent of the Blue River District, told the youths at the closing worship time.

Ritter told the children a brief history about church founder John Wesley and how the church came to being during the Revolutionary War, when sentiments against The Church of England soured in the rebellious colonies. And then he went on to explain a key component of United Methodist teachings.

“One thing about the church that means the most to me – it’s something John Wesley taught – is prevenient grace,” Ritter said. “It means before you do anything to deserve it, God loves you.”

Ritter’s talk provided a summary to an afternoon of sessions that provided the youths with an opportunity to sing contemporary songs, learn about the Wesleyan Quadrilateral, learn how to get involved beyond their local churches and have some of their questions answered. They also had a chance to laugh while learning.

“I don’t know if John Wesley was as much of a nerd as Sheldon Cooper, but he did everything systematically and methodically,” Ritter said. “That’s where our name came from.”

The afternoon started with a discussion about what it means to be a Christian, provided by the Rev. Eduardo Bousson, campus minister at Nebraska Wesleyan.

“You just believe,” Bousson said. “It almost sounds like a Hallmark card or something out of ‘Polar Express.’”

He later rolled out what he described humorously as a “revolutionary product.” It was the “Christ-o-matic.” A ragged-looking stuffed bunny went into the machine, and a new, fluffy bunny came out of it.

Unfortunately, Bousson explained to the kids, that isn’t the way it works when you choose to become a Christian. He recounted the Bible story from Mark 10:17-22 about a rich man who asked Jesus what it took to gain eternal life. The Savior directed the man to sell all that he had and give the money to the 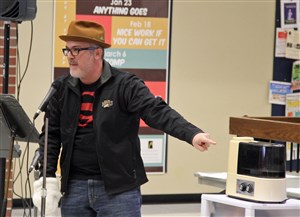 The Rev. Eduardo Bousson, campus minister at
Nebraska Wesleyan University, points to the
"Christ-o-matic" during a talk aimed at helping
confirmation students understand what it means to
be a Christian.
poor. The man walked away disappointed.

The meaning of the story? Being a Christian means putting yourself aside.

After the opening worship setting, the confirmation students split into four groups and learned about the importance of Scripture, reason, experience and tradition. They also learned what it means to get involved beyond participating in a youth group.

Erynn Pahlke of Kearney and Giselle Bergmeier of Beatrice – both high schoolers on the Conference Council on Youth Ministry – shared their experiences helping plan The OneEvent youth rally, activities for annual conference session and taking part in leadership roles in their local churches.

Bishop Scott J. Jones had planned to take part in the rally, but travel delays related to his return from the Holy Land wouldn’t allow for enough time to travel to the event in Lincoln. He instead addressed the students via a video in which the bishop pointed out the benefits of being part of a connectional church that extends to Kansas, Nebraska and beyond.

He also explained the importance of the confirmation process.

“I think the decision to follow Jesus, to be a disciple, to join the church, to reaffirm your baptism or to be baptized for the first time – all of that is maybe the most important think you’re going to do in your whole life,” he said.

He said those things all help in our lifelong journey toward salvation and living for Christ, and he pointed out the importance of sharing Jesus with others.

“There’s nothing better than being a United Methodist Christian,” the bishop told the children. “And it’s my privilege to be part of our connectional church and to be related to you all.”