Living Water United Methodist Church in Kansas City, Kansas, is proof that churches can have their own resurrection stories and be made new.

The Kansas East Conference discontinued Stephens United Methodist Church in 2004. The building, in an area known as Piper among many residents of northeast Kansas but more accurately identified as Kansas City, remained vacant for three years before being used by a Nazarene church from 2007 to 2009. 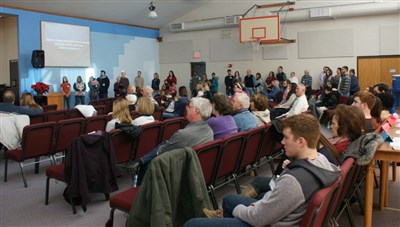 Congregants at Living Water United Methodist Church in Kansas City,
Kansas, worship in a multi-use room that is used for a variety
of purposes.

In 2009, the conference decided to plant a new church in the same building where Stephens UMC once operated. The Rev. Mic McGuire accepted the challenge to move from Emporia, Kansas, to create a church that was new in every way except for the building.

“This truly is a new church start,” said McGuire. “We only have one couple from the pre-existing United Methodist Church in attendance.”

When the original church shut down, its attendees scattered to other congregations. Once an area surrounded mostly by farmland and open spaces, the church now finds itself relatively close to the popular Legends Outlets shopping development, which is also home to the Kansas Speedway race track, Sporting Kansas City soccer club and Kansas City T-Bones minor league baseball team.

But proximity to those attractions didn’t guarantee any success at planting a new church. McGuire said he knew he needed to branch out to the wider Kansas City community so people knew not only who he was but that a new church had been born in the area. He “did anything and everything” to introduce himself to the community, including taking part in service organizations, attending high school events, getting acquainted with the chamber of commerce and – perhaps most importantly – getting to know his neighbors.

McGuire and his wife, Pamela, previously had lived in the Bonner Springs area, just 10 miles south of Living Water’s location. But the changes to the area didn’t make that earlier residency much of an advantage. In fact, they were strangers.

“It’s been a ride. It’s been a blessing,” McGuire said. “And it hasn’t been without enormous challenges. But God has been good to us.”

One way the church overcame early challenges was some early successes in youth ministry. The McGuires’ son, Shawn, led the youth group as a volunteer for a little less than a year after the church opened, sometimes having as many as 20 youths attend Wednesday night fellowship gatherings and on Sunday mornings. When other commitments pulled Shawn from that role, others stepped up to keep the program going strong.

Pamela and Sue Barham, who has since moved to another church, started a children’s ministry for preschoolers through sixth-graders that now draws 30 or more young children for Wednesday night activities and Sunday School.

“It’s probably our strongest ministry as far as numbers are concerned,” McGuire said.

And it’s a ministry that is touching entire families. In fact, one person in the congregation, Laura Porras, credits the children’s ministries and Living Water’s outreach to helping improve her family members’ lives. Her son, Aki, was a preschooler at a Montessori school when the pipes burst from cold weather during the Christmas break time of late December of 2010 or early January of 2011. Water destroyed the bottom floor of the school and badly damaged the upper level.

Living Water stepped in to provide a home for the school during the more than two months it took to repair the damage.

At first, the church’s leaders said they didn’t know how they would work out housing the school during what turned out to be more than two months' worth of repairs, but, “They said ‘we’ll figure it out.’”

While the school was meeting at Living Water, the church hosted its annual Cabin Fever kids carnival. A flier provided to kids at the school sparked an interest in young Aki.

Porras took Aki to the carnival, and he apparently had a good time playing the games and going to school at the church.

“My son asked if we could go to church here,” Porras said. “We weren’t church-goers at the time.”

The warm welcome Porras and her family received at Living Water led to a desire to bolster a relationship with God.

Several years later, Porras has a church family. Aki is now 9 years old. She has endured a divorce – a time in her life that she says she greatly appreciated the support of the Living Waters congregation – and has been remarried.

“My husband was in the same place I was at when I first started coming here,” she said of her spouse, Neil. “He had a strong belief in God but hadn’t been part of a church.”

Because of their journey toward a stronger relationship with Christ as a married couple, Porras said McGuire approached them about leading a couples group, a fellowship and devotion ministry that already has doubled from its humble two-couples beginning, with larger gatherings expected in the spring.

It’s one of many small groups that has helped Living Water flow as it grows. Approximately 90 of the 150 people who attend worship each week are involved in some kind of small group – from choir to prayer groups to a ministry that provides lower-income children with healthy snacks when they go home for the weekend.

And McGuire would like to lead Living Water to do even more. While Living Water is now on solid ground, the pastor acknowledges that there is more to do.

“I’m a fast-food guy, so I wish we were farther along than we are,” he said. “I have learned to be more patient though.”

Editor's Note: This is the first in a series of stories spotlighting positive outcomes in congregations across the Great Plains Conference. Do you have a success story to share? Perhaps even in one program, mission or area of ministry? Share your story idea with Todd Seifert, communications director for the conference, at tseifert@greatplainsumc.org.