Lyons youth get after game hangout

In rural communities such as Lyons, one of the largest complaints by youth is that there is nothing to do in the community.

One woman and a group of supporters is looking to change that. Kari Troyer has worked for the past year at turning the upstairs area of Lyons UMC into a comfortable, safe environment for children to come relax at on Friday evenings. Troyer explained that the “after game party” was originally created to give Lyons and area youth a place to hold a post-game party after home games. However, it has slowly evolved into so much more. Now, even after away games area youth come to laugh, talk, play games, eat free food provided by volunteers, or just sit and listen to music as they talk with their friends.

Upon entering the top floor of the Lyons UMC, it was very apparent that Troyer’s hard work and vision have paid off. Youth swarmed the building after Friday’s home game. Food, including hot dogs, chips and cookies, were provided to the youth by local volunteers from the Lyons First Christian Church.

There is something for young folks to do in almost every upstairs room of the Lyons UMC. In the large room where most of the youth gather, an air hockey table, pool table, stereo for CDs are just a few of the many things they can look forward to when going to the Friday “after game parties.” Besides those attractions, local volunteer Cecil Burdette said there are two other air hockey tables, a ping pong table and place for children to play electronic console games. 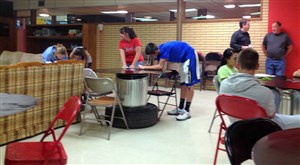 Troyer and her volunteers have worked hard to make the area relevant to youth, and almost every room has been converted to spell out “cool.” Even the tables that the youth eat at are specially designed to make clean up a breeze. They are constructed from a metal trash can and a large metallic disk. The disk has a hole in the center so that when children are finished eating, all they have to do is push their crumbs, plates and any other trash to the center. Cecil Burdette, whom Troyer asked to build the tables, said they were designed to look like vinyl records.

Troyer said on some evenings they could expect as many as 50 to 70 youth throughout the evening. All volunteers commented that the children are well behaved, and since it has started there have been no instances where any youth have had to go home. “Kari Troyer and Kristi Showalter are responsible for this and they do a good job,” said Burdette.

During the evening, youth responded to how much they appreciate what Troyer and other community members are doing for them. Bryan Rascon said he really enjoys the “after game parties” on Fridays because it gives him a chance to meet up with friends and relax. “I get to play ping pong, eat some free food, talk with my friends, listen to music.” When asked he later added that if the hangout wasn’t there he’d probably be bored at home.

Hank Lopez said he likes the environment of the after game parties at the Lyons UMC. He said all of the kids are a good influence on one another. He likes that there is adult supervision present at the events so that no one has to worry about bullying. “It gives up all a great environment to interact in. We don’t have to worry about school. We just relax and have as much fun as we can,” said Lopez.

The after game parties take place every Friday at 9:30 p.m. through the school year except when there is a home game. Troyer said they close the hangout during the summer to give their staff a break before starting back up in September. Troyer said children throughout Rice County and beyond are invited to attend.

Story by Ryan Carlson which ran on the front page of Lyons News on Feb. 10, 2015
Original article

Photos by the Rev. Brenda Davids