After one year, Café Quetzal connects with coffee, Christ 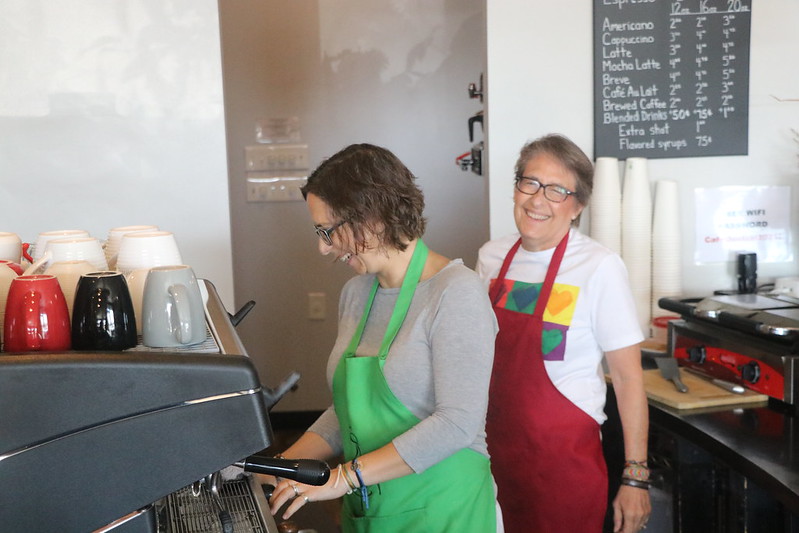 As Topeka’s Café Quetzal celebrates its first anniversary, founders of the coffeeshop ministry see it as a triple success — as a business, as a church and as a community center.

“We feel like we have a good flow now,” said the Rev. Christine Potter, who opened the doors at the strip mall at 21st and Belle on Aug. 2, 2021. “We’re really confident in what we’re doing, we have a good following of people who come in regularly, and new people discovering us all the time.”

Business manager Barb Muench said Café Quetzal has made it through the steep learning curves of both a new business and a new ministry.

“(We learned) how to juggle,” she said. “We’re still learning that.”

The breakfast menu is expanding, to including bagels and cream cheese, and more options for stuffings in the breakfast burritos, including more veggies and sausage, with pork and plant-based options. The menu had been vegetarian; separate vegan and gluten-menus will soon be introduced.

“It just flows into our philosophy of radical hospitality,” Muench said. “We’re trying hard not to exclude people who have preferences in terms of vegetarian, vegan, gluten-free — but at the same time we don’t want to exclude the mainline eater who wants a little bit of meat.”

Word has spread about the coffee at the café.

“We definitely have some self-proclaimed coffee snobs who love us,” Muench said. “Which means we have high-quality coffee, a high-quality product.”

But Café Quetzal has something other coffeeshops don’t have — baristas like Potter and Muench who are ready, willing and able to counsel customers or talk about Christianity.

“Which is part of the beauty. We’re not confined to that hour on Sunday mornings,” Potter said. “That was our hope, our vision. But we have seen that people are hungry for that relationship. We have people who don’t come on Sundays who say this is their church.

The party will include balloons, a bounce house, community art project, live music, a photo booth, and tables with information on all that’s happening in the space. There will be food and drink specials and food samples, as well as drawings for items including a new Café Quetzal travel coffee mug.

Café Quetzal’s 10 a.m. Sunday worship services draw 25-30 people (fewer thanks to the summer dip that takes its toll on most churches) and several dozen regular weekday customers — although there’s little intersection between those two circles.

“We have a lot of people who I would consider members of our faith community who do not come on Sunday mornings,” Potter said.

“We have a core group that’s pretty much every Sunday,” Muench said. “We’re finding the same sort of patterns traditional churches are seeing, with people coming every five weeks being the new normal.”

The Sunday service has its congregation sitting at the two- to four-person café tables for discussions pertaining to the sermon topics.

“We feel like we’ve settled into a flow of who we are and the kind of welcome we present on Sunday mornings,” Potter said. “We have really grown into a community that has lots of deep discussion on Sunday mornings, which has really been amazing. The original intent was that we would have interactive services, and it has definitely been that way. People share their stories of joy, of concern, of faith. We learn from each other every week and it’s a powerful way to do church.”

The discussions can sometimes get emotional, she said.

“It’s very common to see tears on a Sunday morning and have a lot of conversation after coffee church is over,” Potter said.

A former pastor at a traditional church setting at Topeka Countryside UMC, Potter said her sermons aren’t much different than in the sanctuary setting.

“Besides making it more interactive, it’s very similar to a sermon I would have given in another setting,” she said.

Elements of traditional worship, including a children’s time and communion, are parts of the service, although there is currently no path to membership nor official professions of faith.

Besides its ministry and coffeeshop, Café Quetzal has opened itself as a community center, with a meeting room that’s accommodated baby showers, staff meetings and book clubs. Potter has handed over the reins of a yoga class to another instructor, and plans for the future include a writers group.

“We’re always finding creative ways for people to come into the space and to use it and share all of our community things together,” Potter said.

Other plans for the future include increased marketing to Topeka West High School, whose campus is nearby, and Washburn University. Live music may be added on Saturdays, a surprisingly slow day for the coffeeshop, Potter said.

Potter is poised for more growth in the worship service.

“Now that we’ve been around as a coffeeshop for a year now, I’d really like to see the Sunday morning community grow and share that with people more widely,” Potter said.

A few changes were made initially, including closing on Mondays to give Potter and Muench a Sabbath, and adjusting the hours.

Potter said that for the past year, Café Quetzal has stayed consistent with the plans she’d sketched out while in New Church Development Planter and Incubator sessions in 2019.

“It often exceeds what we hoped this space would be. And it’s been very unpredictable,” she said. “We feel like we’ve created the space we set out to create.”