Voting clergy and lay members at the Great Plains Annual Conference session will decide on whether to continue to provide a health care stipend to clergy who serve an appointment full time or three-quarter time or to revert to a group health plan.

Prior to the opening of the conference – scheduled for June 7-10 in Grand Island, Nebraska – health coverage was the subject of a livestream presentation Thursday, June 1. During the broadcast, the costs and benefits of each option will be explained to clergy and laity, with a time for questions and answers about both plans. View the recording.

Questions still can be sent to questions@greatplainsumc.org.

“It was becoming apparent to us there were some significant sustainability issues in the government-sponsored markets, starting in Nebraska,” Brewer said. “Since that time, we’ve only seen that trend accelerate.”

To Learn More
Find links to details about the proposals.
(Scroll down to the "Key Subjects" area on the page with this link)


In the past few months, Blue Cross and Blue Shield of Kansas City has announced it is leaving the exchange that became popular after passage of the Affordable Care Act, also known as Obamacare, beginning in 2018. Aetna announced in May that it plans to leave the Nebraska exchange in 2018.(

In material distributed to lay delegates and the clergy, both the current plan and the recommended alternative are presented, along with the advantages and disadvantages for each. One proposal maintains the current stipend system but increases the amount given to clergy to purchase insurance to $15,850. This amount, paid by the local church or charge, represents a 5.7 percent increase over the 2017 amount. The alternative proposal would move eligible clergy to a group health plan provided by Blue Cross Blue Shield of Kansas. The cost for that plan would be the same $15,850, paid by the local church or charge. However, in the group health option clergy also would pay an out-of-pocket premium ranging from 3 percent to 7 percent of their salaries, depending on whether they choose single or family coverage, as well as the PPO or high-deductible plan.

The cost to the local church or charge is the same, regardless of which proposal is chosen during the annual conference session.

Brewer said the Pension and Health Benefits team is not endorsing either alternative. A survey of clergy to determine satisfaction with the stipend system provided mixed results.

“Based upon the returns from the survey that we did, there are people who are very happy with what we have right now, and they’re very satisfied in the way it’s working for them and for their families,” he said. “We also have people who say, ‘This simply cannot work.’ There’s just not unanimity about where the current plan is right now.”

Added to the discussion over health care plans is uncertainty in Washington, D.C., over the future of the Affordable Care Act.

“If nothing happens, we don’t know what the administration may or not do with the current exchanges that are in place,” Brewer said.

Brewer encourages those voting on June 10 to read over the materials, in which the pros and cons of the current plan and proposed alternative are spelled out and to prepare any questions for the June 1 livestream.

“We want to make sure, as much as we can, that clergy have access to adequate health coverage that’s affordable to them and to local churches,” Brewer said. “We believe what we’ve given to the conference are the two best options. At annual conference, they will need to decide which one works the best.” 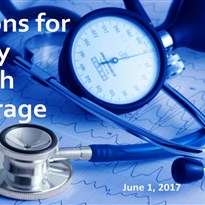