Big Garden branches out with orchard planting in Kansas 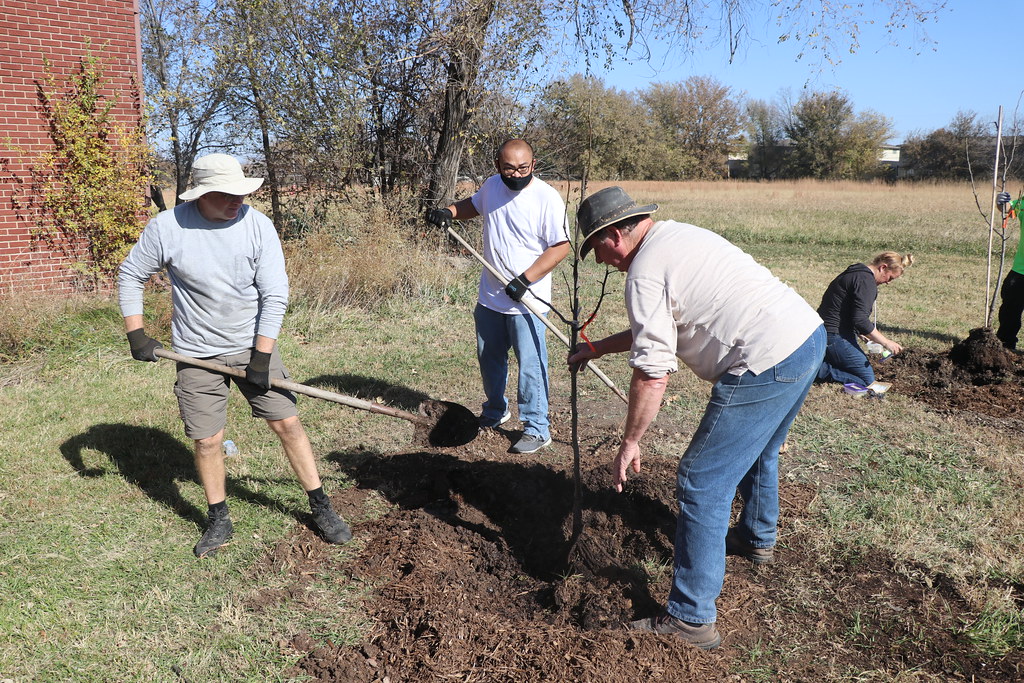 Volunteers were working hard in early November 2020 in Emporia, but their thoughts were on 2023.

That’s when the Asian pear trees that they were planting outside Abundant Harvest, part of the Emporia Rescue Mission, are supposed to start bearing fruit.

The volunteers, from preschoolers to college students to a pair of senior citizens, dug into the dirt south of the mission.

It’s been a scene that has been repeated three other times in Kansas this fall. Through The Big Garden, which began in Omaha 15 years ago as a program of United Methodist Ministries, four churches in Kansas – Bonner Springs, Colby, Wichita and Emporia – received grants to plant orchards in areas of food insecurity.

With money from the United Methodist Health Ministry Fund, trees and bushes were purchased from The Giving Grove, a Kansas City, Missouri-based nonprofit that provided not only the seedlings but instruction, mulch and fertilizer.

“They were the perfect partner to plant these orchards, because we can get these fruit trees that are specifically selected for this area, this climate, the soil we have here in Missouri and Kansas,” said Molly Baurain, Kansas coordinator for The Big Garden.

Each of the four newly planted orchards were unique to the churches’ requests, she said. Other locations include bush cherries (which take four to seven years to bear fruit), apples (about six years) and peaches (three to four years).

Emporia Grace United Methodist Church, which has already had spots in a public garden for rent on the south side of town for six to seven years, received the grant for the orchard.

“We’re always looking for ways to feed the community,” said Brenda Ulrich, the church’s pastor. “That’s one of the goals we have at Grace, and it’s a goal at Abundant Harvest. What a better way to know that you’re growing your own thing and have ownership.

Alderman said the Emporia Rescue Mission eagerly accepted the offer from Emporia Grace, which he said helps fulfill its vision.

“We have the land available and our whole ministry here is based on getting food to people who need food,” he said. “We thought, we have the land and they have the idea to put some trees in.”

Fresh fruits and vegetables are something that his clientele don’t normally buy for themselves, Alderman said.

“They stick to basic things when they’re purchasing food, and fruits and vegetables usually get cut out,” he said. “And if they get it, it’s in a can.”

Monica Delgado, leader of the garden committee for Emporia Grace, admired the variety of volunteers helping with the tree planting.

“If we work together and grow together and harvest together, we can really go far,” she said. “It’s a different, unique step that The Big Garden has helped us grow.”

Delgado said her church already considers its own garden project a success. Thanks to grant monies, water lines were installed that reach to all of the individual plots, which are rented for $30 a month, “to give people a sense of ownership.”

A monthly “Dining in the Garden” on the first Thursday of each month drew about 40 people before the coronavirus pandemic, she said.

Baurain, who joined The Big Garden staff a year ago, is working toward a master’s degree in horticulture with an emphasis in urban food systems from Kansas State University.

“I have a passion for helping people grow their own food,” said Baurain, who recalls times with her grandparents and parents in their gardens. “I feel like every person should have some at least basic knowledge of growing fruits and vegetables. I think it’s really important for our future for people to have those basic skills.”

It makes sense from an environmental standpoint as well as just plain good taste, she said.

“Having a fresh tomato from your own garden is a thousand times better in my opinion than a hothouse tomato that’s coming from Chile and sitting on a truck for a week,” she said. “It doesn’t taste the same.”

The Big Garden has applied for grant money for 10 more orchards in Kansas in 2021, she said. One church that received a grant had to delay its planting until the spring, she said, and another didn’t meet the deadline for the grant application.

Baurain said all of the sites had volunteers that showed enthusiasm for the project.

“Every site has been really excited about getting the trees and they’re very hopeful for the future of having good production,” she said.