Bishop Ruben Saenz Jr. can look back at it now and chuckle.

In 2016, the newly elected ecumenical leader of the Great Plains Conference was moving into his new residence in Wichita. He was dressed informally, in shorts, when the boss of the moving crew began ordering him around.

“I played along,” the bishop recalled.

Finally, someone addressed him as “Bishop,” and the boss began to apologize.

The bishop’s recollections of racism — including, as a 12-year-old, his new schoolmates in Austin, Texas, refusing to play ball with him because of his Hispanic heritage — were among the experiences shared in the third and final session of the “A Time to Listen” webinar series on Aug. 8, concluding with the topic, “Where do we go from here?”

Bishop Saenz’s experiences were not the only ones the panel shared. The Rev. Dee Williamston, Salina and Hutchinson districts superintendent and an organizer of the webinar, said that in several cases people who didn’t know her “thought I was the maid and not the pastor.”

Finch said he looks at racism through a “different lens” as half of an interracial couple and the adoptive father of a son born in Ukraine.

“This time has been really troublesome,” he said. “One of the concerns we live in is trying to explain the normalcy of what others view as OK, and why there’s this tension growing in America. … We’ve been living in that tension, those uncomfortable places.”

Finch said the church has remained silent too long regarding systemic racism.

“The church has failed in its obligation to challenge people to a higher level of calling,” he said. “For far too long we’ve kept politics out of the church for keeping our nonprofit status, but when we look at our call, we are called to stand against the status quo. We are called to disrupt the very systems, as Jesus did, to bring equality and wholeness to the individuals that we’re reaching and hearing the gospel.

“There’s healing and deliverance and salvation in the gospel that would only come if we preach against the systems that are enslaving the people,” he added.

Williams grew up in Wichita, worshipping in what she called a “thriving and loving church,” Saint Mark UMC.

She said she didn’t experience racism in the church until she got to non-Black congregations.

“All the systemic stuff, It took me a long time to grasp and to understand what was happening here,” Williams said. “How you’re being treated or denied or dehumanized or not allowed.”

Williams said her family has consistently discussed the Black Lives Matter movement, and she is concerned it has developed a reputation of angry and violent protestors.

“That imaging is what typically distracts people from the guiding principles of Black Lives Matter,” she said of the group that she said is trying to promote racial justice, harmony and solidarity.

Gannon, who grew up in eastern Montana, had not seen or interacted with persons of color until he attended college. Then, as an athlete at Rocky Mountain College in Billings, he saw minority athletes mistreated by their coach.

“There was a double standard, and it was obvious,” Gannon said. “It was not just obvious, it was consistent.”

Gannon said Chapel Hill is developing a satellite campus in inner-city Wichita, and he went on a ride-along with a police officer in the neighborhood.

He said he was shocked that several cars with white drivers passed by the patrol car, but the policeman stopped a motorist of color.

When Gannon questioned the officer, he said, the reply was “Why would I pull over people who are for me?”

“We have got to move the conversation into a place of deep emotion,” he said.

Gannon said the current conversations about race “forces us into the places of discomfort.”

Jorgensen said she is “always mindful” of her white privilege, knowing that “I can look away when I want to.”

“My call is to feel adequately uncomfortable,” she said. “I always trying to be uncomfortable to make sure I stay engaged.”

Jorgensen said the message of vision and hope should be the same for all persons.

“I do think white folks want that. They want this idea of a peace and prosperity for all people. They’re afraid of what it might take to get there,” she said. “But then you talk about death and resurrection, that even though we experience something — a loss of privilege that might feel like death — God can make something out of resurrection, even death.”

The Rev. Dr. Rose Booker-Jones, a retired clergy and district superintendent who has moderated all three discussions, said pastors must be “walking with the people.”

“It’s a matter of the heart. It’s getting to the heart of the people,” she said. “The best way to do that is to let them you know care about me, whether you’re black or white or brown or whatever.”

The webinar concluded a three-part series, although Booker-Jones and Williamston said similar discussions would continue in the near future. 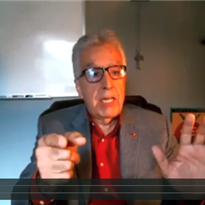 Time to Listen: Where Do We Go From...