Saturday morning, he told the congregation Sunday at First United Methodist Church in Topeka, he had his earphones in listening to music, and his coffee cup started to shake.

“My Native American flute music is a little too far off the charts,” Saenz recalled.

It turned out to be an earthquake near Pawnee, Oklahoma, measuring 5.6 on the Richter scale, whose tremors could be felt throughout the Great Plains.
“I’d never experienced them before,” Saenz told the congregation, then smiled. “Welcome to Kansas.”

“I was uncertain it would happen because we’re the Great Plains Conference now, and maybe there was someone in the former Kansas West or the former Nebraska Conference that had similar traditions,” Clinger said. “But we asked him, and he said yes.”

Saenz delivered the sermon at three Sunday-morning services at Topeka First, two in the chapel and one in the sanctuary. And with Topeka District Superintendent, the Rev. Kay Scarbrough, he also served communion.

Clinger said the congregation was impressed with the new bishop, who started Sept. 1 after ministry in the Rio Texas Conference.

“They’re excited about his personability, his grace, his humility, his humor,” Clinger said. “They’re really excited for his leadership in the conference.”
Saenz spoke on discipleship and how, like a former church of his in Texas, Topeka First is a downtown church. 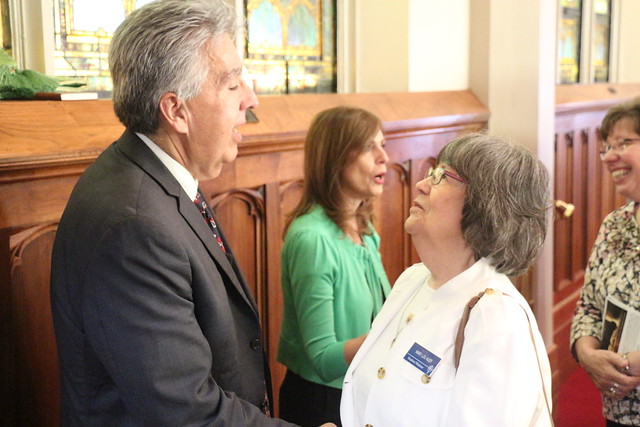 “I think he’s going to be great as far as helping our district feel like a community. He’s already started that feeling of community in our church. He’s helping us. He’s encouraging us, being a downtown church, to engage the community – which we’ve been trying to do,” Clifton said.

Mary Lou Auer, a Stephen Ministry leader at Topeka First, said she was impressed by Saenz’s warmth and loving nature.

“There’s been a long line of people that he’s followed and a lot of people he has to live up to,” she said. “But he looks like he can do it.”