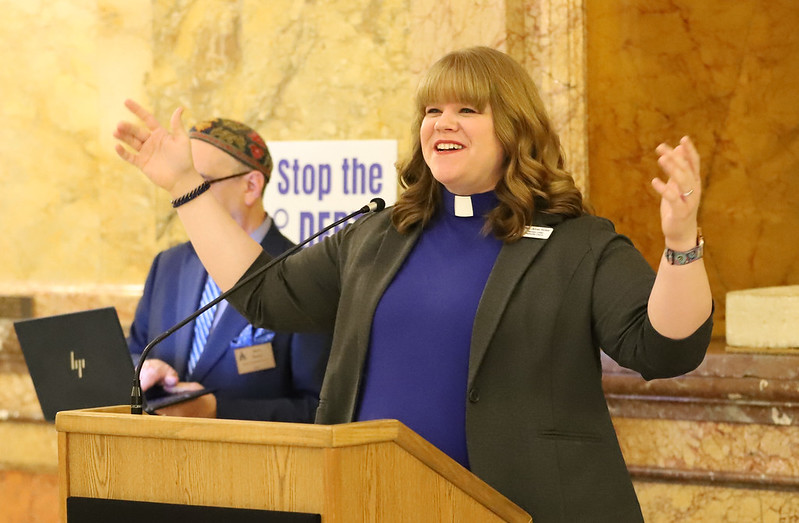 The Great Plains Conference bishop joined Catholic and Jewish leaders in calling for changes in the industry in a Jan. 25 news conference in the rotunda of the state Capitol.

“We don’t always agree with each other,” the bishop said, “but we agree on this.”

Bishop Wilson asked the Kansas Legislature to conduct hearings in the House Financial Institutions and Pensions Committee, “so lawmakers can hear the many stories of real people who need real help where only elected officials can provide the solution.”

“We hope to see common-sense protections put in place for consumers so they can overcome the emergency that forced them to seek a payday loan in the first place and then pay back that commitment while also contributing to the larger economy,” the bishop said.

The group Kansans for Payday Loan Reform, which was scheduled to meet with legislators following its noon news conference, is asking for a cap of interest rates for payday loans, where the average is nearly 400% and have risen to as much as 700%.

The group is also asking for those who take out the loans to have the ability to make installment payments.

Ricker told of her struggles with payday loans as a new pastor in Hays about 10 years ago. She and her husband took out a $750 loan for a vehicle repair that took about $3,000 to pay off.

“We need payday loans to help, not harm, our neighbors in Kansas,” she said.

Chuck Weber, executive director of the Kansas Catholic Conference, said the group’s intention was not to eliminate the payday loan industry.

“Just to make it more fair for those who have to use it,” he said.

“It’s incumbent on us to let them know this isn’t fair,” he said.

“It is past time for us to address this,” Xu said.

Rabbi Moti Rieber, executive director of Kansas Interfaith Action, said this was the third attempt to bring about payday loan reform in the state.

Payday loan businesses, he said, have several contract lobbyists in the capital.

Rieber praised the diversity of the religious leaders in the effort.