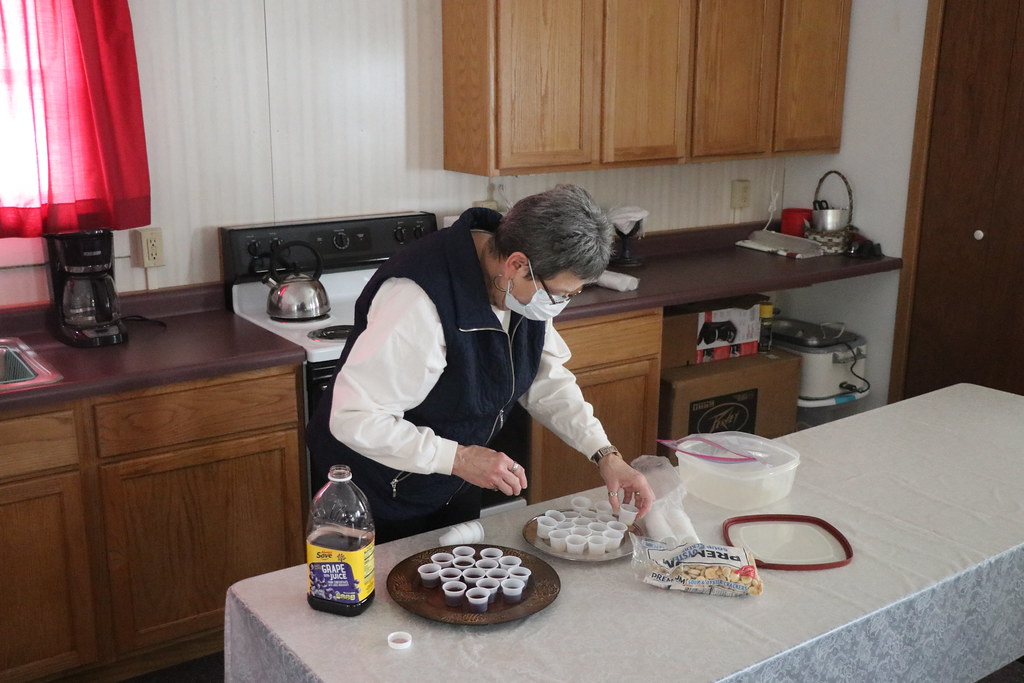 The congregations in Hollis Patterson’s first pastoral assignment didn’t know anything about him until he was introduced to the Pastor-Parish Relations Committee in Ellis and Odell UMCs nearly four years ago.

“I just want to see their reaction,” Patterson recalls then-Blue River District Superintendent Bill Ritter telling him at the time.

But introducing a Black pastor to an all-white church proved to be anticlimactic, Patterson quickly discovered.

“When we walked in, there was nothing but love,” Patterson recalled, laughing about multitudes of desserts that he and his spouse, Stephanie Lafond, hauled off with them that night. “They welcomed me and my wife with open arms, and to this day it’s been the same.”

His new congregations shrugged off any differences as well.

“We’re a very accepting congregation,” said Sharon Gydesen, a self-described “multipurpose person” at the Odell church, whose duties include organist, UMW leader and preparing the grape drink and oyster crackers for twice-monthly communion.

“It was just kind of, ‘OK, they’ll send us whoever they think is good for us,’” she added.

Patterson makes the 131-mile round-trip commute from his home in Lincoln in his black Dodge Ram pickup to Ellis, an unincorporated community west of Beatrice, for 9 a.m. worship and Odell, a village of 300 just north of the state line, at 10:30.

Census figures show that 0.741% of the residents in Gage County, where the churches are located, identify themselves as Black or African-American. Patterson said he’s heard of a few Black in-laws of church members or of those in the communities but didn’t know of any of them residing in the county.

Despite the fact that his congregation is as white as the clapboard exteriors of his churches, Patterson said he’s never experienced a bit of racism.

“To be honest, I’ve never felt that from anyone here,” he said. “I’ve been warned by other people to be careful as the only person of color out there. The people that I’m around are Godly people. God loves me. God loves them. And they love God. I love God.

“I know racism still exists, I’m not blind to it,” Patterson added. “But I’m protected by God. I’ve never experienced any racism from anyone in my congregation.”

Nationally, racial issues came to a boiling point several times in 2020, with the killings of unarmed Black people making headlines.

But Patterson said he never spoke of those issues with his churches.

“I don’t want to push that issue onto my congregants,” he said. “If they wanted to speak to me about it, we would have a discussion.”

Patterson said he was impressed with how involved his churches were in the community, including annual pancake feeds, roast beef dinners, soup luncheons, food drives, blood drives and contributing to food distribution in Beatrice.

“The work that we’re doing here in these congregations may seem small, but it’s good work,” he said. “I’m just thankful my first appointment was so inspiring to me. I don’t know everything, so they’ve worked well with a student pastor.”

Now 42, Patterson grew up in Drew, Mississippi, a town of 2,000 equal distance between Jackson and Memphis.

The son of a 15-year-old mother, he was guided by his grandmother, who also raised 11 girls and three boys. That meant several church services and Bible studies a week.

“Growing up Baptist, it’s not like an hour or 45-minute service,” he said. “You’ve got to pack a lunch.”

He bounced back and forth between Mississippi and Lincoln, the home of several aunts and uncles.

After graduating high school in Drew in 1998, he joined the U.S. Army, including a six-month deployment in Iraq and a 16-month stint in Afghanistan.

Shaken by the deaths of several members of his platoon that he considered close friends, Patterson returned home to find that his first wife was having an affair and wanted a divorce, he said.

Patterson threw himself into two diversions at the time. One was hip-hop and rap music, where he called himself M-Loco and dreamed of stardom. The other was sinking into the depths of substance abuse.

“I was trying, literally, to drink myself to death and was self-medicating,” he said.

His aunt, the Rev. Brenda McCaskill, was formerly with what became Lincoln New Hope UMC, asked Patterson to drive her and her children from Mississippi to Lincoln on the July Fourth weekend in 2006, and convinced him he should stay in Nebraska.

“My auntie, she really saved me,” he said. “That was a blessing that she thought of me.”

This same aunt, now living back in Mississippi and battling cancer, was a 20-plus year veteran of the Army as a drill sergeant, and had earlier urged him to consider the military.

McCaskill had a vision of Patterson as a 15-year-old leading his own church, at which he scoffed at the time.

Now remarried, Patterson felt his life change at 2 a.m. on a Sunday.

“One night God spoke to me,” he said. “He told me that if I didn’t change the way I was going — the drinking, the drugs — that I would not see another day. It scared the living daylights out of me.”

Patterson woke his wife up and told her they were going to church that morning at New Hope.

“There, for the first time when I stepped in, I felt the Holy Spirit,” he said.

He became increasingly involved in church and jumped at the chance to become the church’s youth coordinator.

Patterson, who was already running a Lincoln day care with his wife that she continues to manage, rounded up those youth and their friends. The youth group, which included singing at services, at times numbered 45 — which was more than the choir robes the church had on hand.

His work was getting the attention of the Blue River District, which named him in 2013 as the youth coordinator.

However, “God tells me I need to do more,” he recalled.

Patterson entered Saint Paul School of Theology while serving as a local licensed pastor in Ellis and Odell.

Since he doesn’t have a bachelor’s degree and with the encouragement of the Rev. Dr. Israel Kamudzandu, former Course of Study director at Saint Paul, Patterson has entered into an advanced Course of Study that would make him an associate member of the conference.

“When it’s time I want a bigger church — not thousands like Church of the Resurrection,” he said. “I want it to be a manageable size where I know each and every person and build a relationship with them.”

Patterson’s background with children and youth — he also coaches football and basketball for the Lincoln YMCA — flourishes in a Wednesday-afterschool program he named HUGS: Helping Us Grow Spiritually.

Taking place at Ellis UMC, it drew more than 40 kindergarteners through high school seniors a week before the coronavirus pandemic, and now brings in about 20. Prior to the pandemic, buses in the Diller-Odell school district would drop attendees off in Ellis.

Patterson leads the fifth- through 12th-graders while a volunteer tends to kindergarteners through fourth-graders.

It begins with a video — the animated “Davey and Goliath” series is popular — and continues with joys and concerns, followed by prayer. Patterson takes the older children for a separate lesson, where they talk about life skills, coping with peer pressure and anti-bullying efforts.

Patterson said he knew the program had become successful when he heard about children and youth inviting their friends to come.

“They’re on fire for Jesus,” he said.

“His strength is the youth,” Gydesen said. “The few that we do have go to the HUGS group in Ellis, and it just seems to work really well.”

Pattterson and his wife have 12 children between them, including two — a 10-year-old daughter and an 8-year-old son — that they share. They also have four grandchildren.

Patterson said he feels an increasing rapport with his congregations in Ellis and Odell. When he had to have knee surgery a few months ago, they brought a chair onto the altar so he could sit to deliver his sermon. When winter weather turns severe on a Sunday morning, he gets a roads update from members of both churches and advisories on whether or not to make the drive from Lincoln.

Before COVID struck, he said, the attendance at Ellis was 30 to 40 a week. Odell had a spike in attendance, 13, on a recent Sunday thanks to the baptism of a baby.

The Ellis service is livestreamed through Facebook Live, and if weather prohibits his travel, Patterson has broadcast the sermon from his home.

Patterson has employed the preaching style of the traditional Black church, including frequently addressing his congregations as “brothers and sisters” and asking for amens and hallelujahs from the audience.

“I like to move around a lot. I like to be seen. I like to engage the conversation,” he said. “Where I grew up, it was nothing to hear someone shout ‘Amen’ or ‘Hallelujah.’”

He does, however, hear from members of his congregation days or weeks after a sermon that what he said really touched them.

“They may not be physically responding,” he said, “but hopefully God’s speaking to them.”

Hollis Patterson’s introduction to the Ellis and Odell churches was very similar to the way the Rev. Kathy Williams met the staff-parish relations committee at Holton UMC in Kansas, where she served for 3 ½ years.

Williams and her husband, Earl, were the only Black people in the Jackson County seat, about 30 miles north of Topeka.

“The ideal is that it shouldn’t matter, but when a congregation is not familiar with a person of color, it creates a lot of anxiety and uncertainty and fear of what it’s going to mean for their church,” she said.

Holton was Williams’ third cross-racial appointment, after working at Emporia Grace and Lawrence First UMCs, but the first time she and her husband were the only Black people in the community.

Beginning with the current appointing season, which continues through July 1, Williams will be working with new cross-racial and cross-cultural appointees, church SPRCs, congregations and district superintendents to ease the transition in areas where the pastor may not look like his or her flock.

For Williams and her husband, discomfort in the beginning at Holton evolved into an attachment with the congregation. Earl led small-group Sunday school classes and joined Kathy for children’s time during worship, even leading it once or twice a month.

She sat in on Sunday school classes and engaged in conversations, helping people realize there were far more similarities they had with each other than differences.

Williams said in her new position she wants to provide what she felt was lacking when she moved into an all-white area.

“It would have been so great had the congregation had some training before I arrived … an opportunity to have some directed conversations,” she said. “It’s about a lot of preparation and training with people. If congregations are willing to humble themselves to acknowledge that, it really is helpful.”