More than 90 people focused on stopping what they see as oppression during a legislative update event Sunday and Monday in Topeka.

“Breaking Chains of Oppression” was the theme of the 2020 Legislative Event for Advocacy in Faith, or LEAF, Topeka First United Methodist Church. The 46th annual event was co-sponsored by the Great Plains United Methodist Women and Church Women United.

The Sunday night portion included a legislative update from State Sen. Carolyn McGinn, R-Sedgwick, and State Rep. Tim Hodge, D-North Newton, as well as a keynote address by Ernestine Krehbiel, a former teacher and president of the League of Women Voters who is now on the Wichita Board of Education.

Monday featured a panel discussion with Randy Watson, Kansas commissioner of education; Delia Garcia, secretary of Labor; and Dr. Lee Norman, Kansas Department of Health and Environment secretary. The Rev. Darryl Burton, who spent 24 years in prison after being wrongly convicted of murder and is now one of the pastors at United Methodist Church of the Resurrection in Leawood, served as the keynote speaker.

In the legislative update, McGinn — chair of the social services, health, agriculture and natural resources subcommittees — said the budget “is in a better situation than we’ve had for a long time,” but legislators still need to be frugal with children and social services issues.

“We’ve had revenues that have exceeded expectations,” Hodge later added.

Hodge said he regretted that discussion of Medicaid expansion in the state was tied into pro-life discussions.

“We’re back in abortion politics again, back to the days of (veteran Kansas politicians) Bob Dole and Bill Roy,” Hodge said. “It’s like the Death Star (from ‘Star Wars’), it keeps appearing.”

Even though the property crime rate is the same as it was 50 years ago, she said, “You wouldn’t believe that by the news, would you?” with the incarceration rate far higher than in 1970.

She encouraged the efforts of those gathered for LEAF.

“God has put you here to speak for those who cannot speak for themselves,” Krehbiel said.

In the Monday morning panel discussion, both Garcia and Watson said that although the state unemployment rate of 3.2% is the lowest in 40 years, those applying for jobs are lacking employability or “soft skills.”

“It’s the one-room schoolhouse meeting the schools where we’re at today,” Watson said.

Norman said that sexually transmitted disease rates — particularly for gonorrhea, syphilis and HIV — have increased in Kansas, especially among teenagers.

“We have to talk to our young people about sexual anatomy and human sexuality,” he said.

Burton, who will be ordained as an elder during the annual conference session in May, told the audience of his journey “from the pit to the pulpit,” becoming a pastor after being falsely imprisoned for nearly 25 years.

“I didn’t hate the people. I hated what they did to me,” he said. “I can’t get those years back, but I can use the years I’ve got left to move ahead.”

Burton is the co-founder of the Miracle of Innocence project, which works with other wrongly accused prisoners to find a way to release. He said his group is working with four individuals — one in Kansas and three in Missouri; one woman and three men — serving time for crimes they did not commit.

“One innocent person in prison is one too many,” Burton said.

Following a lunch where attendees met with their state legislators, 11 workshops were conducted, including faith in action, the Kansas Silver Haired Legislature, Moms Demand Action for Gun Sense in America, National Alliance on Mental Illness, Friends of the Kaw River, Equality Kansas and Alliance for a Healthy Kansas. 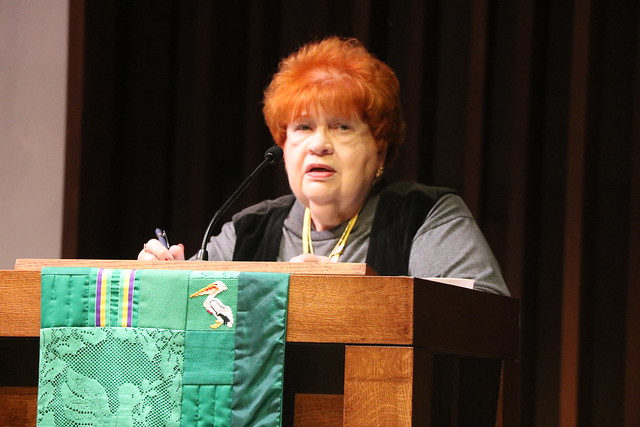