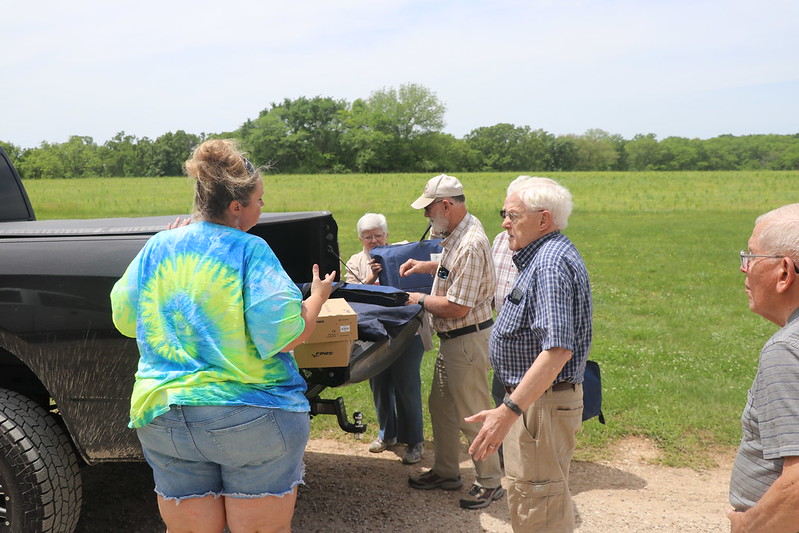 The cover photo of the Volunteers in Mission is from the group's Facebook page, used by permission. VIMs in the picture are Rick Holbrook, left, Annette Holbrook, Marlin Brown, Janet Ward, Bill Ward, Bob Moore, Linda Buchmueller and Chuck Buchmueller.


The children and youth who descend on the camps in the Great Plains Conference this summer might not notice how clean the facilities are or that new structures have been built.

But the cleanup and construction are thanks to a dedicated — but dwindling — group of retirees who comprise the Volunteers in Mission team for the conference.

“These guys are amazing,” said Sara Shaw, conference camping ministries coordinator. “They have such a giving spirit in everything they do, from working on plumbing to sheet rocking to rebuilding outdoor worship centers to rebuilding benches. Everything they do, they’re doing God’s work. God is using their hands and feet to spread love and hospitality.”

A group of eight was busy preparing Camp Chippewa in eastern Kansas for the arrival of campers. VIMs are working at four of the five Great Plains camps this summer but have worked at all of the conference camps through the years.

“It isn’t just church camps, but that’s a majority of the places where we go,” said Linda Buchmueller of Pratt, Kansas, while cleaning and organizing a kitchen at Chippewa with volunteers Janet Ward and Annette Holbrook.

VIM stalwarts can rattle off lists of places where they’ve visited and worked, including Native American reservations in the Dakotas, helping hurricane victims in South Carolina, Texas and Louisiana, and aiding where needed in Washington state, Oregon and Idaho.

There’s always a trip to Colorado in July.

“Somebody has to go up there and help them out,” Buchmueller — who began volunteering with her husband, Chuck, in 2009 — said with a laugh. “We sacrifice at 7,000 feet.”

The group brings its own recreational vehicles, which were parked in various locations on the Chippewa campgrounds. Having an RV is a benefit, volunteers say, but not a necessity.

“It just makes it comfortable because it’s your own bed,” Buchmueller said.

Before they begin work, the group gathers for a 30-minute daily devotion that Shaw says is some of the most powerful testimony that she's ever heard.

Through the years, VIM has seen a decline in the number of volunteers.

The number of volunteers has dropped drastically, she said, and blames part of it on the pandemic.

VIM team coordinator Marlin Brown began 26 years ago after a seeing a note on the bulletin board of his church, Wichita Calvary UMC.

“There’s 57 names on my list of places where we’ve been at least once, and I’d say 80% of them we’ve been to more than once,” Brown said, taking a break with VIM Bill Ward of Winfield after deconstructing some park benches on the Chippewa grounds, which were replaced by dozens of new benches made by the VIM.

“We used to take 18 teams a year out, and now I’m down to 10 or 11. I’m running out of people,” Brown said. “I’ve been attending funerals, funerals, funerals, and besides that they’re getting old age and just have to give it up.”

Brown said many of his memorable moments have come from 16 years of VIM trips to reservations in the Dakotas.

“We got a good taste of the Native American way of life and how bad we treated them. It’s not fun to see how they live,” he said.

“We get so much more than we put into it,” Brown continued. “That’s some of the struggles we have, how good we feel when we’re there working with someone who lives in poverty and is hard up, and we’re there having a good time. We’re doing it for God, but we’re also doing it for them. That’s the struggle we live with, and I’ll struggle with it til I get hauled out of here.”

Since many of the areas where the volunteers go are steeped in poverty, Brown said the group is “pay to play,” with money taken along to purchase materials.

Brown said he hopes VIM can get more interest from retirees across the conference.

“I’d love to have dozens within the next few months,” he said. “With COVID under control, we can get back to teams regularly and double the size of the group, which is darned well needed.”

Information on VIM will be available at the Great Plains Camps booth at annual conference, June 8-11 in La Vista, Nebraska. There also is information on the group’s Facebook page.

“You can’t do anything better than what you’ll get here. You’ll get more out of it than you put into it. We’re going to see to it that you’ll enjoy it,” Brown said. “If you aren’t feeling the call, I hope you soon will feel the call, because there’s plenty of work out here to do, plenty of opportunities to help somebody.

“We’re happy to help wherever we can, and that’s why we keep doing it,” he added. “And we’re going to keep doing it hopefully for a while yet.”