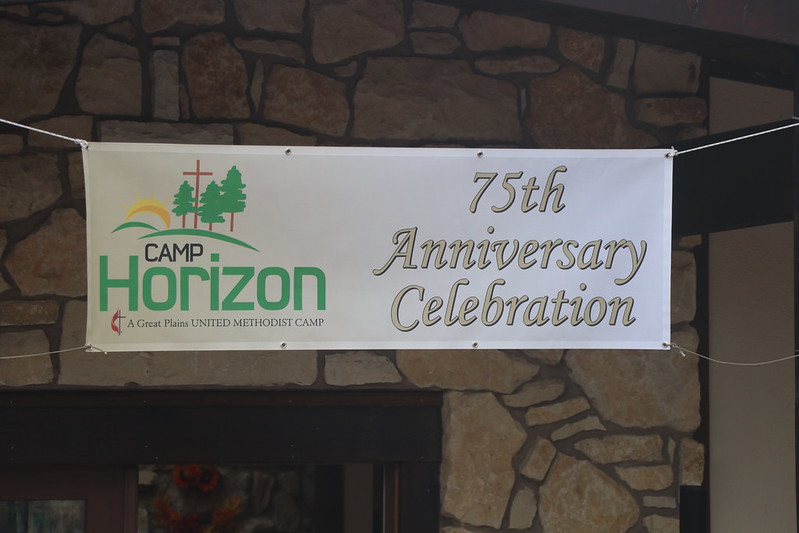 Marjorie Hunt Utt has 75-year-old memories of being a happy camper.

“A couple in Belle Plaine brought me down, and there weren’t many attendees here,” the 93-year-old recalled while waiting for the beginning of the 75th anniversary celebration at Camp Horizon. “There wasn’t much here. We had a building and that was it.”

But Utt, one of four generations attending the anniversary, still had a fondness for being in the first group of campers.

“I loved it,” she said. “The peacefulness and the fellowship — just having a good time.”

Utt was among about 100 camp alumni and friends to attend the celebration of Camp Horizon, near Arkansas City and overlooking the Arkansas River.

The celebration included praise and worship music and testimonials about how camp changed lives.

Among them was Ben Wheeler, who was a reluctant fifth-grade camper in 1990.

“This is one of those thin places in the universe where we’re just a little closer to God,” said Wheeler, who continued his relationship with Horizon through the 2010s as a camp counselor.

Joel Wilke, who has served as camp director for 12 years, said among the numerous aspects of the camp he is proudest of is its leadership development for young people.

“Whether they’re on staff or volunteers, they get to lead worship and games and Bible studies,” he said. “It’s exciting to see all the kids who come here and leave empowered and transformed with confidence and energy and seeing how they plug that into their local church.”

Charles McKinzie, pastor at Winfield Grace United Methodist Church, said he has seen transformation among campers – including his own 12-year-old daughter, who returned from Horizon this summer with a desire to enter ministry.

“(It’s great) seeing kids being able to be present, in the moment, when so much of our day-to-day lives are the rat race of one moment to the next,” he said. “To see them unplug from that and be here and be with one another in relationships, having counselors as someone to look up to, and having the stillness to just listen and sit and be. It’s really beautiful to see young people have the opportunity to connect themselves and connect with each other in holy, beautiful ways.”

Dennis Artz, Camp Horizon board chair, told the audience that much of the success of the camp in the past dozen years has been thanks to Wilke.

“I can’t see it coming to fruition without his leadership, his drive, and the relations he has built with other camp directors,” Artz said.

Wilke told the audience that a fundraising drive for the camp is well underway, with engraved pavers being sold and placed along a path to Inspiration Way on the campgrounds.

Before the ceremony, Wilke said the camp has recovered from the COVID precautions during the previous two years.

“Culturewise and energy, we’re stronger than ever,” he said.

Camp attendance this year was about 65% of the level in 2019, he said, with expectations of returning to those levels next year.