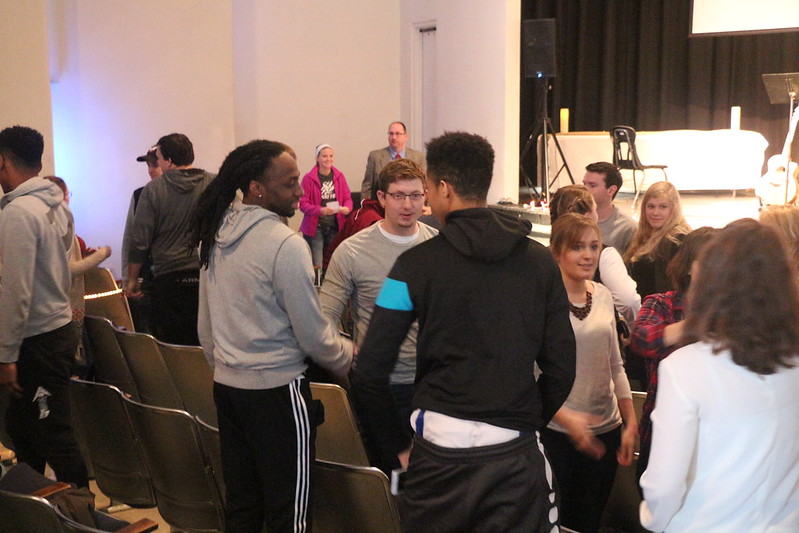 In sports parlance, the Rev. Kevin Hopkins and the Rev. Ben Hanne each played “away games” on Feb. 15-16.

It was a homecoming of sorts for Hopkins, who was pastor of neighboring Winfield Grace from 2005 to 2010, but Hanne’s first visit to Baker in Baldwin City, Kansas.

Both of the Kansas schools are supported by the Great Plains Conference and The United Methodist Church.

Each spoke from the week’s lectionary, 1 Corinthians 3:1-9, with Hopkins’ equating Paul to an upset parent and Hanne leading with an anecdote about his own cat, who preferred the easier-to-digest “wet” food over what she had been fed.

“Jesus is always pushing people out of their comfort zones,” Hopkins told the Southwestern students.

“Each one of you is called to do something magnificent in the world around you,” Hanne told the Baker chapel attendees. “And it’s asking you to do it as an adult.”

To the best of the knowledge of the campus pastors, it was the first time a “pulpit swap” had taken place between the two college ministries.

Hopkins approached Hanne with the idea over the summer, and it was finalized in November as both were riding in a bus with their students to the Imagine What’s NEXT conference in Atlanta.

Both said they were energized by the new surroundings and new students.

“It’s the same glory that I get out of any time I work alongside colleagues,” Henne said. “It’s a reminder that the work we do is greater than just the single place we serve at.”

Hopkins added that the experiment showed “we’re not isolated in what we do. We’re putting together our efforts for higher education across the state.”
Both Hopkins and Hanne had served in church ministry before becoming campus pastors, and both had familiarity with the college missions.

“I knew there was an immense complexity of the job and the number of hats I had to wear,” said Hanne, who served on campus ministry boards. “Yet there nothing that prepared me for actually stepping into the role.”

Hopkins said he had been teased by other pastors for getting to take Sundays off, but he counters that he still prepares a weekly sermon – and has to be prepared for Bible studies, small group sessions and counseling well past 10 p.m.

The biggest challenge as a campus pastor, both said, is the constantly rotating members of the congregation.

“It’s the changing nature. Every year you basically start over,” Hopkins said.

“Things reset at semester in a way I never thought they would,” Hanne said. “If you build up momentum in the fall, there is no guarantee that after Christmas break that it’ll jump back that way.”

Both were pleased with the exchange, and want to see it go beyond Baker and Southwestern.

“We’re talking to other campus ministry people to see if we can’t expand it in the future,” Hopkins said.