After 55 years of harvesting wheat, corn and soybeans on their central Kansas farm, Clinton and Bonnie Russell have planted the seeds for a bounty that will benefit United Methodist churches in the state.

The couple donated the sale of their farm equipment from a July 25 auction to the Kansas Area United Methodist Foundation, establishing a charitable remainder unitrust. The sale of the equipment – including two tractors, drills and a corn planter – raised about $1.3 million for a ministry grant for local churches to enhance their outreach ministries.

“You two are groundbreakers,” Bishop Scott J. Jones of the Great Plains Conference of the United Methodist Church told the couple when he met them Dec. 16 on their farm south of Belpre in Edwards County.

“You all are breaking new ground for the United Methodist Foundation in Kansas,” Bishop Jones told the Russells. “They do a lot of good things at the foundation, but this was a neglected area who needed some visionary donors who could set some things in motion.” 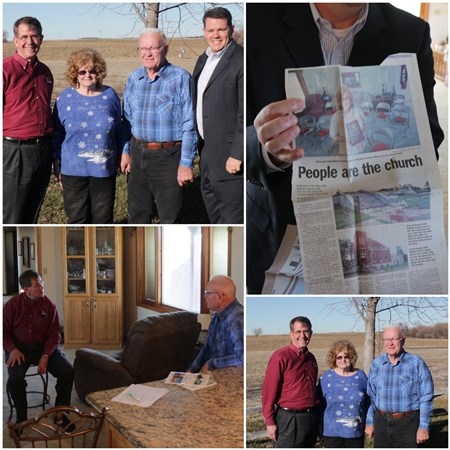 Clinton Russell, who turns 80 in January, said he was advised that a charitable donation would be the best way to avoid taking a loss on taxes on his farm.
“When you don’t have much debt, and you’ve got all this land with high land prices, you’ve got to do something,” he said. “My accountant and lawyer have been telling me for several years to do something or the government would come in and get me.”

After being told that charitable deals had been struck with Mennonite churches in the area, Russell – who has attended the nearby Trousdale United Methodist Church all of his life – said the decision was an easy one.

“Once we decided on the Methodists, that was it,” Bonnie said. “It’s always been family and church first.”

The Russells were put in contact with Alan Herndon, president and CEO of the Kansas Area United Methodist Foundation.

“We’ve talked about having it be more than bricks and mortar, more in the sense of changing lives and transforming lives through the Methodist Church,” Herndon said.

Between online bidding and the live auction, the $1.3 million was raised, including $200,000 each for the Russells’ two newest tractors. All of the implements were purchased from the John Deere dealer in Greensburg, Kansas.

Greensburg and Trousdale were both struck by two days of vicious tornadoes in May 2007, where damage included the virtual demolition of the Russells’ home church. The congregation voted to rebuild the church, with a groundbreaking that October and a grand opening in time for Easter Sunday in 2008.
“I have bragged on this congregation now for eight years,” said Bishop Jones, who served as bishop of the Kansas West Conference at the time of the tornadoes. “This is a town where the United Methodist Church plays a crucial role. They said, ‘Of course we’re rebuilding this church.’”

Clinton was the building superintendent for the project at the church, where Bonnie has been the treasurer for 23 years. While the new church was being built, members of the congregation held services in their homes. A Sunday service at the Russells was documented in The Hutchinson News.

The project was paid off before construction began, and both the Russells said there were “no arguments” among those discussing the design of the new Trousdale church, with separate ideas for the new kitchen turning out to be nearly identical.

“That church has maybe the best kitchen in all of Kansas, because that’s where all of the community gathers,” Bishop Jones said. “They did a great job, built a beautiful building, and it fits their congregation. That’s a story about resilience of people who have roots in the community and said ‘We want this church to continue to play a role in the community.’

“These folks have played a crucial role in leadership,” Bishop Jones added.

That spirit of leadership continues with their gift to the foundation, he said.

The Russells – who have two sons who both farm the family land while leasing equipment and one daughter, who lives in Wichita, as well as eight grandchildren – said they were unaware before this year about such donations to the foundation and would encourage fellow farm families to consider the same.

“It will encourage others who are in a similar situation,” Bishop Jones said. “I want there to be Methodist witness to the Gospel to help people know the Lord in as many communities as possible in Kansas.”


About the Foundation
Learn more about the Kansas Area United Methodist Foundation and its investment opportunities on the organization’s website.