Church of the Resurrection opens doors to new sanctuary 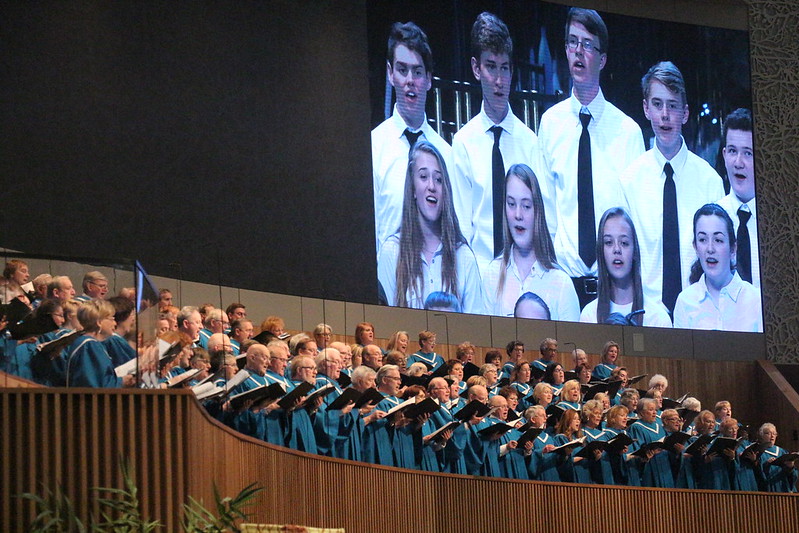 As a teenager, the Rev. Adam Hamilton worked at Hardee’s. He was part of a crew opening a new Overland Park location of the fast-food franchise, which had a “soft opening” where staff members could invite their parents.

“In case we killed somebody with hamburgers, we wanted it to be family,” Hamilton joked to his congregation.

The United Methodist Church of the Resurrection in Leawood, Kansas, which Hamilton began in a funeral home 26½ years ago, had the self-proclaimed “soft opening” of its new sanctuary during services March 25-26. The 3,500-seat, $81.3 million project will get an official grand opening at its five services April 1-2. Church members were encouraged to attend the “soft” opening, but wait to invite others until the grand opening so they could, in Hamilton’s words, “work all the kinks out.”

The first services at the new sanctuary of Church of the Resurrection – which has grown to become the largest United Methodist congregation in the world – included a blessing of the baptismal font and the altar by Great Plains Conference Bishop Ruben Saenz Jr.

“Today is a special day of rejoicing,” Bishop Saenz told the congregation. “Some of you have been here from the very beginning. To see this, you know nothing is impossible through God.”

Bishop Saenz said every house of worship has a spiritual value that exceeds its material value.

“When you walk in, you experience that space where heaven and earth touch, where we hear the Good News of God’s saving grace, where our lives are transformed. We experience the call and claim of God to send us back out into the world, so the world can be what God envisions it to be.”

The new sanctuary, with three-quarter round seating, includes seven stainless steel “sails” that represent both the seven days of creation and the seven days of Holy Week. The carpet and theater-seat cushions in the sanctuary are a light green, to suggest grass.

“All of this is meant to tell a story,” Hamilton told the congregation.

But the visual centerpiece of the new sanctuary is its stained glass window, nearly 100 feet wide and 37 feet high, which uses 161 panels to tell the story of Christianity from the Garden of Eden to 20th century civil rights leaders, with more than 70 individuals depicted, with an image of Jesus Christ dominating the center.

A video by the window’s creator says the work weighs eight tons and is the largest single-image stained glass window ever made. Its fused glass has never been tried on this scale, according to its creator. Each panel was made in California and shipped to Leawood.

A five-year project, Hamilton said the goal was to create an intimate and a sacred space, as well as something that gave a sense of community.
Various architects, bank officials and contractors were invited to the services and recognized throughout the day.

Hamilton said he hoped the new sanctuary would be an example for United Methodists “for centuries to come,” and would be a gathering place for present-day Methodists from around the world.

The botanical theme continues outside, with plans for a memorial garden outside of the new building.

Hamilton and his wife, LaVon, were presented with the first two spaces in the garden by the church’s managing executive director, Dan Entwistle, who joked during the services that there was no easy way “to give someone a burial plot.”

“There’s no other human we could recognize that has made this project possible,” Entwistle said. “We love you, and we’re so grateful for you.”
Those in the first services also watched a video of the construction process.

Church of the Resurrection’s previous sanctuary will be converted into ministerial space and small group gathering areas in another $22 million project, Hamilton said.

In his sermon about the Promised Land, Hamilton said that he didn’t want the completion of the sanctuary to be similar to a friend’s church in Missouri, where its parishioners stopped attending because the new building project was complete.

“This is not the Promised Land,” Hamilton told those in attendance. “We’re just getting started.”