Community Market builds on mission at The Hub Argentine 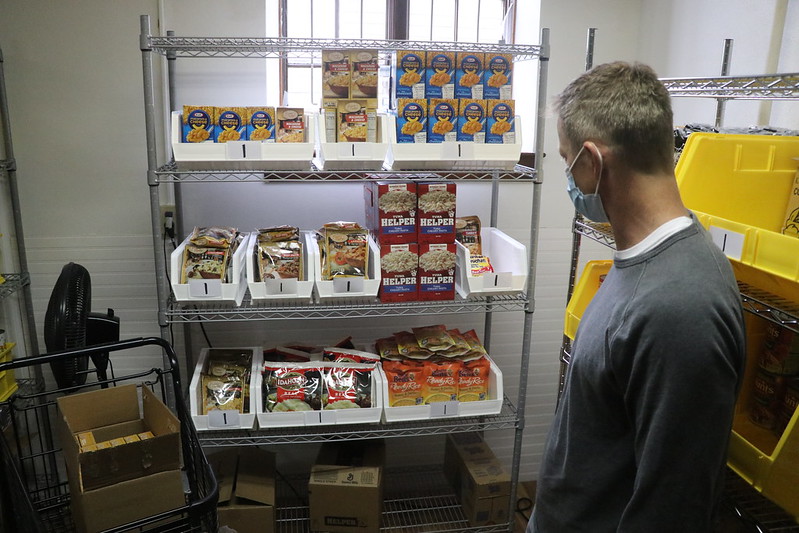 The term food pantry may conjure a vision of a hodgepodge of disorganized donations, but the Community Market — which opened Oct. 19 at The Hub Argentine in Kansas City, Kansas — has items crisply and clearly arranged that shows respect for its patrons while being cosmetically appealing.

“At The Hub and so many of our local churches, we want to treat people as equals and in everything we do, with dignity and respect and authenticity,” The Rev. Carter Ellis, Hub director, said. “We wanted to give people the same decision-making freedom and ability that finances might limit.”

The Community Market currently serves 40 families from the former Metropolitan Avenue United Methodist Church, which closed in June 2020 and reopened as The Hub the next day. The market has shelves of well-organized nonperishables and refrigerated cases for meat, fresh fruit and vegetables. There are even modified shopping carts.

Patterned after a program at another food bank in Kansas City, Ellis said, every item has a points value, and patrons receive points whether their family is small, medium or large.

“The long-term sustainability here and long-term viability here is to build a community and to do so in a way that has a foundation that everyone’s created in the image of God and has gifts to share,” she said. “As people are coming in, they get the same experience everyone who shops in a store does.”

“Look around. It’s a grocery store,” Ellis said. “It’s nothing fancy but it’s got the necessities to support a family.”

Ellis was excited about the first shipments of milk and eggs the following week. They come from Harvesters, a Kansas City-based community food network, and are distributed through Hiland Dairy Foods in its Milk to Plate program.

“Instead of hauling milk all over town though all kinds of weather and spoiling, we’ll deliver once, twice a week to food banks, and that way they have quality product,” sales representative Howard Scott said.

The company delivers milk, eggs, butter, yogurt and cottage cheese to food programs throughout Kansas City, Scott said, even neighborhoods that are deceptively upper class but still are in need.

“People are a little embarrassed sometimes to say they need help,” Scott said. “But they can come to church, because church is all about helping people.”

The Metropolitan Avenue UMC had a food pantry for decades, Ellis said, and it hit its peak in need in the late 2000s. Many people returned for the first time in a decade, she added.

“What I think we have here is people who are just living paycheck to paycheck, and most of the time they can make it happen,” she said. “What this does is allows them to get the extra thing they might not have been able to get.”

Chris Soper, who has volunteered at The Hub twice a week for about a year, is credited by Ellis with making the displays in the Market appealing.

“People can come in and make decisions for themselves. They line up in a very respectful way, and everyone is treated with dignity as they come in,” said Soper, a recent retiree. “The Hub, the Market is something that’s very special, and one of the things that makes it special is the way the food’s presented to the people.”

Soper also volunteers in an afterschool program at The Hub, where the youth are also invited to help with the Market and the clothes closet next door.

“They’re investing in the community and learning this place is much more than an afterschool program,” he said.

The Hub Argentine, which also is the home for Ushindi United Methodist Fellowship, has a four-pronged mission with its Community Market, clothes closet, afterschool program and community garden.

Volunteers Sandra Gomez and Aglee Gonzalez were at work in the clothes closet, taking winter items out of boxes, putting them on hangers and then onto racks.

“It’s a lot of work in here,” Gomez, a longtime volunteer, said.

COVID shut down the clothes closet for a year, but it reopened in the summer of 2021.

“Word’s finally getting out that we’re in the clothing business again,” Gomez said. “It’s coming along really good.”

Gomez has lived in the Argentine neighborhood — considered 60% Hispanic and 30% African and Asian — for most of her life. About half the Hispanics served at The Hub are like Gonzalez, her faithful co-worker, Gomez said: They speak Spanish, but not English.

She wished more volunteers would help in the clothes closet, which is serving a growing population.

Ellis, who felt the call to ministry while serving at a church food pantry in her native North Carolina, said the next step for the clothes closet is to give it “more of a thrift shop feel.”

At the Market, Ellis said, “We have some pretty good partners,” including After the Harvest, KC Farm School at Gibbs Road, and the Hub’s own community gardens.

Rice and canned beans are the greatest need for donations, she said, and canned soup during the colder months. Also appreciated are cans with pop-tops, she added — about 10% of the people who come to The Hub are unhoused.

“Not having to rely on can openers is a huge thing,” Ellis said.

The Market will, in January, begin spotlighting a different customer each month, including a featured recipe and the ingredients available in the market to make it. She hopes that will inspire more interaction and more community among those who use the Market.

“The long-term goal is for the community to see this as a place that celebrates people for who they are and where they can use their gifts to serve God and their neighbor,” she said. “One day at a time, we’re working closer and closer to that goal.”