The loss of the Rev. A. Mark Conard is being felt by United Methodists in both the Great Plains and in an African nation where he helped establish a partnership.

“He was loved by both people in Zimbabwe and in the Great Plains Conference,” said the Rev. Kalaba Chali, Mercy and Justice coordinator for the conference. 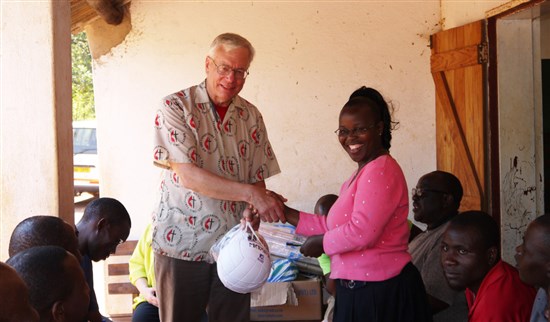 “He will be missed by a lot of people,” Chali added.

A retired pastor and former district superintendent, Conard died Tuesday, Oct. 18, at a Wichita hospital. He was 68.

Those with condolences, memories, stories and photos are asked to share them online at http://bit.ly/MarkConard.

Conard and his wife, Joyce, a retired nurse, celebrated their 45th wedding anniversary in August. She survives him, as well as three children: Jonathan (wife Melissa) of Sterling, Kansas; the Rev. Andrew Conard (whose wife, Nicole, is young adult leadership coordinator of the Great Plains Conference), pastor of First United Methodist Church in El Dorado, Kansas; and Kristin Conard of Santa Cruz, California, as well as four grandchildren.

Conard had a 42-year career as a pastor – serving churches in Geneseo, Maize-Bentley and Wichita Pleasant Valley – before retiring in 2013 from First UMC in Hutchinson. He also served six years as district superintendent in the Salina District. Conard led delegations to the United Methodist General Conference and served on the episcopacy committee for the South Central Jurisdiction.

But colleagues are recalling his efforts to establish connections with the Great Plains and Zimbabwe conferences, through a movement called “Chabadza,” a Shona word meaning “come alongside.”

“He was inspired by the people of Zimbabwe many, many years ago,” said the Rev. Linda Louderback, Wichita West district superintendent.

Conard introduced a Chabadza covenant at the 2010 session of the former Kansas West Conference, and it was approved. He had made five trips to the African country, most recently with a delegation from the Great Plains in 2014, appearing at a convention of 50,000 people. 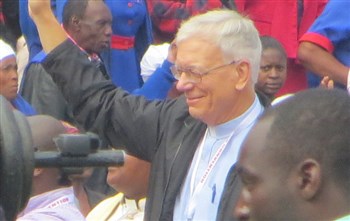 “Mark embraced the art of cultural differences,” said Chali, among those accompanying him on the trip. “He loved learning how to behave in a different culture.”

Chali recalled that in the 2014 trip, after the presentation of gifts from the Zimbabwe people to those in the Great Plains, Conard in turn gave them a present, unbeknownst to the rest of the delegation: a solar-powered cell phone charger.

“It wasn’t so much the gift – and Mark knew very well how to play this – he knew that when you travel to these places as a conference representative, you’re not there for you,” Chali said. “You’re there for all the laypersons, all the lay leaders, all the pastors and the district superintendents and your own bishop.”

“When I hear our discussions about ‘global church’ and a ‘connected church,’ Mark’s way of being a United Methodist Christian makes that tangible for us,” he said.

“Many churches or circuits simply cannot afford to provide even minimal housing, and pastors and their families are sometimes left without a place to live,” Conard said at the time. “The idea of a Chabadza partnership is any kind of assistance is only extended to those with whom we have a relationship. It means coming alongside one another to help in a mutual way. It does not mean doing something for somebody else that they can’t do for themselves.

“My rough personal estimate is any financial support that we are able to send has an impact at least five times greater than it would have in the states,” he added.

The Zimbabwes bestowed the name “Mutendi,” which means “shepherd” in Shona – the language spoken by about three-fourths of the country – on Conard.

“I am hurting,” Simon Mafunda, lay leader for the Zimbabwe East Conference, wrote in an email to Louderback after hearing of Conard’s death. “Mark was such a good friend. He was so passionate about Chabadza and had touched many lives in Zimbabwe, especially at Mutambara Mission Centre. Words fail me. May his dear soul find rest in eternal peace. His humility was just humbling. It was a real honor for me to share my life with him.”

Louderback, who was also in the 2014 delegation, said Conard sparked her interest and mission for Zimbabwe.
“Somehow I feel like I’ve lost my leader,” she said.

Louderback spoke of Conard’s strengths, both as a pastor and a leader.

“He was a quiet leader, and he had a dry sense of humor,” she recalled. “He had a fun way, and yet a serious way, of looking at life. It always involved Scripture and his faithfulness.

“He was always unassuming. He didn’t try to get in the limelight, he just did by his very presence,” Louderback added.

Both Chali and Louderback spoke of Conard as a human encyclopedia, knowing details about Zimbabwe and both states in the Great Plains Conference, down to geographic locations and pastoral changes.

“He had so much in his head,” Louderback said. “I’m going to miss his quiet leadership, his faithfulness, his attention to detail.”

“He enjoyed being a part of something that was so exciting,” Chali said. “That was because of his ability to work with people of different theological perspectives. He was loved by liberals in the church; he was loved by conservatives.

“He acted as a disciple of Jesus, but also Jesus-like. That will be hard to replace.”