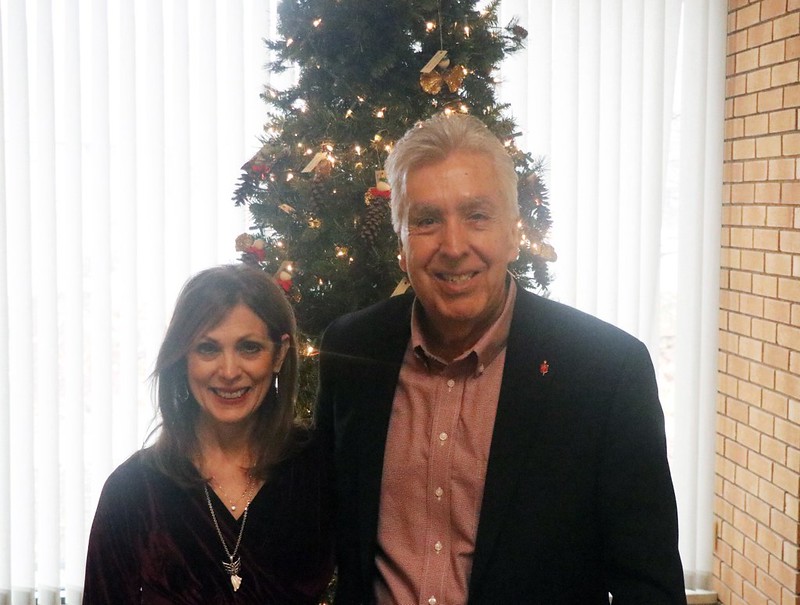 With waves of laughter and tears, the Great Plains Conference bid farewell to Bishop Ruben Saenz Jr. and his wife, Mayé, on Dec. 9.

About 150 clergy, laity, cabinet, retirees and staff members gathered at Topeka Countryside United Methodist Church to honor Bishop Saenz, who will begin Jan. 1 as the episcopal leader of the North and Central Texas conferences.

Among the speakers was the Rev. David Watson, a retired conference cabinet member who praised the bishop for further bonding the former Kansas East, Kansas West and Nebraska conferences into the Great Plains, a process that started two years before the bishop’s 2016 assignment.

“We were all living together in this awkward arranged marriage,” Watson said. “But it hadn’t really been consummated yet. But he got us there. Prior to his arrival, we were just kind of flirting across the breakfast table with each other. But he led us to the altar and pronounced us one.”

Other speakers including Scott Brewer, conference treasurer and director of administrative services; Rev. Paul Wilke, Countryside pastor; and Bishop Dee Williamston, the former Great Plains director of clergy excellence. Wilke and Bishop Williamston both praised Bishop Saenz for his connections to the clergy and laity in the conference and teased him for his penchant for speeding through the highways and byways of Kansas and Nebraska.

Janelle Wilke, Paul’s wife and a close friend of Mayé, told of their adventures together – usually when the bishop was out of town – shopping and going out to eat, as well as recounting the night that a storm knocked out power in the bishop’s residence and Mayé called in a panic that doors had blown open and rain was coming in. She also told of Maye’s disgust that bats had infiltrated the residence, before presenting her with a Beanie Baby bat as a gag gift.

The bishop – known for his “sock game,” in the words of Brewer – received footwear representing the University of Kansas Jayhawks, Kansas State University Wildcats, Nebraska Cornhuskers and Kansas City Royals, as well as a Kansas City Chiefs stocking cap.

Mayé also received a Dallas Cowboys jacket, identical to one that had been stolen from the Saenz’s vehicle a month earlier.

At the conclusion of the 90-minute program, the Saenzes thanked the conference for accepting and loving them and letting them show their love in return.

“You are our family,” Mayé said.

Earlier in the morning, the Saenzes joined conference staff and cabinet members for a breakfast where the two also spoke.

“I’ll never forget the joy I had when I was appointed to the Great Plains Conference,” the bishop recalled of the 2016 South Central Jurisdictional Conference in Wichita.

He praised the conference’s teamwork and caring for each other.

“You don’t just have a job, you have a community,” he said. “You care about each other.”

Bishop Saenz also praised the conference staff, district superintendents and administrative assistants for their commitment to helping the clergy, laity and congregations of the Great Plains.

“You set standards in excellence in how a conference should respond,” he said.