Conference talks about serving others, reacts to General Conference outcomes 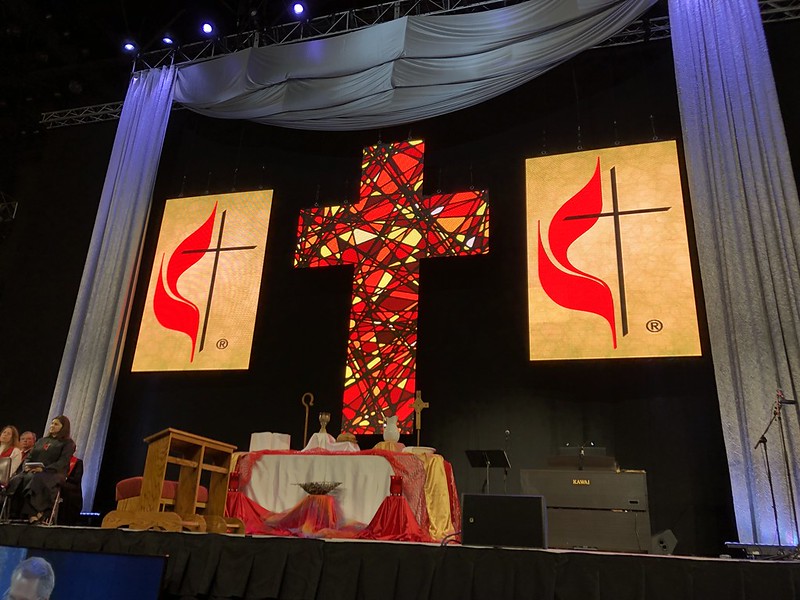 With a theme of “Therefore Go: Serve Others” for the 2019 Great Plains Annual Conference, messages throughout the event, May 29-June 1 at the Kansas Expocentre in Topeka, focused on fresh starts — from setting priorities for ministry to starting off in ministry for newly ordained clergy to coping with unrest in The United Methodist Church amid the ongoing debate over human sexuality.

Bishop Ruben Saenz Jr. set the tone with his episcopal address by acknowledging the church’s struggles.

“There are several moments in scripture where God creates chaos before something new can happen,” Bishop Saenz said. “Just think about it. And so, we’re in this chaotic moment. But what is God doing? That’s my question.

“Lord, what are you up to?” the bishop asked. “And how do I fit into all these things? How do you fit into this? I don’t understand it all. That’s OK. I only see a little part, but God sees the bigger picture. And we have to trust in the slow work.”

The session’s special guest was the Rev. Michael Mather, pastor of Broadway UMC in Indianapolis. He spoke about prioritizing people in ministry and emphasized the importance of reaching out to the community to better understand how to serve others.

Mather told stories about how his congregation became more vital to its community by truly getting to know the people around it and harnessing their gifts to reach even more people. In each case, Mather said, it was critical to view situations from a standpoint of abundance of what God was providing to the church and to the people around it.

The Rev. Adam Hamilton, founding pastor of the United Methodist Church of the Resurrection in Leawood, Kansas, provided the ordination sermon and challenged the new elders and deacons, as well as the new commissioned clergy and newly licensed local pastors, to be good shepherds of the Good Shepherd’s sheep.

Hamilton, pastor of the largest congregation in the denomination, started his sermon by noting challenges facing The United Methodist Church and local churches in general before jokingly addressing the 2019 class of 10 new elders, one new deacon, and one transfer from the Korean Methodist Church.

Hamilton gave the ordinands, the nine people commissioned and the 35 newly licensed local pastors five tips to succeeding in ministry:

The ordinands averaged 36 years of age, while the commissioned class averaged 42 years of age in a year when 55 pastors retired from Great Plains churches and the appointive cabinet.

In conference business, the clergy and lay members passed three resolutions linked to the outcome of the special session of General Conference earlier in 2019.

In response to the General Conference adoption of the Traditional Plan, members to annual conference voted 607-396 to affirm a resolution that states: “The Great Plains Annual Conference (GPAC) condemns the decision of the 2019 General Conference to pass the Traditional Plan and apologizes for the harm that it has caused LGBTQ+ persons, their families, their friends, and the body of Christ. We affirm that all persons are individuals of sacred worth, created in the image of God, but we also assert and affirm that no human being is incompatible with Christian teaching.”

Another resolution, which passed on a 548-385 vote, uses some of the conference’s Missional Opportunities fund to provide $20,000 total in grants available to local congregations for ministries that raise up LGBTQIA+ persons as missional leaders in the annual conference.

A third resolution, introduced after the annual conference session opened, passed 586-396 and affirms the commitments set out at a meeting known as UMC Next from May 20-22 at United Methodist Church of the Resurrection. Those commitments are: It further encourages local churches to have an open dialogue about the 2019 General Conference actions.

The annual conference also passed one petition, via a show of hands, to the 2020 General Conference that would direct the General Board of Church and Society to assemble a study guide on the science behind human sexuality and to offer the guide to local churches as a means of providing information to parishioners. This is similar to studies on reproductive health previously provided by GBCS.

Among other business, the annual conference members voted to allow clergy with six years of full-time appointment, or equivalent for less-than-full-time clergy, to be allowed up to three months of leave “for personal reflection and self-renewal.” The local church would pay for the pastor’s salary while on sabbatical, with the conference paying for the interim pastor. After review by the Council on Finance and Administration, the annual conference voted to refer the matter to the Clergy Excellence team with a directive to report at next year’s annual conference on what would be necessary to implement such a renewal-leave plan.

The annual conference also addressed climate change concerns by voting to have the Great Plains Creation Care Team and Disaster Response Ministries work together to incorporate climate change mitigation into their responsibilities so that the church can become more proactive as well as reactive to increasing catastrophic climate events. It also urges Great Plains Conference churches to reduce their carbon footprints through specific measurable actions. Another resolution aimed at having churches and conference buildings assessed for their carbon footprints and then requiring reductions over a three-year period had considerable interest but was referred to the Connecting Council — a group of representatives from around Kansas and Nebraska that routinely handles business and study concerns between annual conference sessions — to determine how best to proceed.


Next year’s annual conference is scheduled for May 27-30 in Topeka. The theme will continue with the quadrennium emphasis on “Therefore Go,” with 2020’s focus on “Seek Justice.”

Read more about the annual conference session and find links to videos from the proceedings, the pre-conference workbook and more.

Todd Seifert is communications director for the Great Plains Conference of the United Methodist Church. He can be reached via phone at 785-414-4224, or via email at tseifert@greatplainsumc.org. Follow him on Twitter, @ToddSeifert.