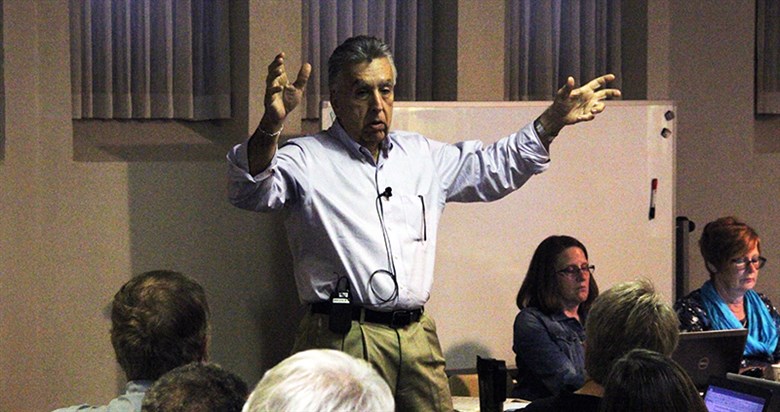 The Connecting Council began laying the foundation for discussion about vision and next steps for the Great Plains Conference during the committee’s fall meeting Oct. 21 at First United Methodist Church in Hays, Kansas.

The council, tasked with making timely decisions between annual conference sessions, is comprised of 70 people, including all 17 district superintendents, district lay leaders, directors for administration, congregational excellence, clergy excellence and communications, conference committee representatives and some at-large members. The October meeting was the first chaired by Bishop Ruben Saenz Jr., who became the conference’s episcopal leader in September.

Following a devotion, the meeting started with a brief review of the unification of the former Kansas East, Kansas West and Nebraska conferences in January 2014 by Oliver Green, associate conference lay leader, and Bob Cox, a member of Hays First UMC who served on the transition team. Bishop Saenz asked the group to describe any surprises that have arisen within the nearly three years of the new Great Plains Conference.

“There is still work to be done,” said the Rev. Amy Lippoldt, chair of the Board of Ordained Ministry and pastor at Basehor UMC in the Kansas City District. “Maybe it never stops. There are challenges of being an annual conference that don’t magically disappear.”

Fully identifying as one conference, looking beyond geographic boundaries and better living out the mission of making disciples for Jesus Christ for the transformation of the world each were voiced as ongoing challenges facing the United Methodist Church within the conference’s boundaries of Kansas and Nebraska.

“We’re not at the end of the transition process,” Bishop Saenz affirmed. “We’re at the front end of it.”

The bishop told the council that each person has a sphere of influence and responsibility of God’s work. He emphasized the need for goals and calm leadership.

The bishop asked council members to begin considering how the conference measures the effectiveness with which the church is transforming the world in our two states and how to create leadership pipelines to help accomplish goals. Along the way, he encouraged everyone to stay focused on the mission field.

“How do we ensure we are allocating our resources to accomplish our purpose?” the bishop asked.

Bishop Saenz said one of the next steps could include the scheduling of a summit with key stakeholders to see what the conference can do to further align its resources and to determine a unified vision.

“Courageous leaders know what to be afraid of,” the bishop said. “We should be fearful of failing to accomplish the purpose, which is to make disciples.”