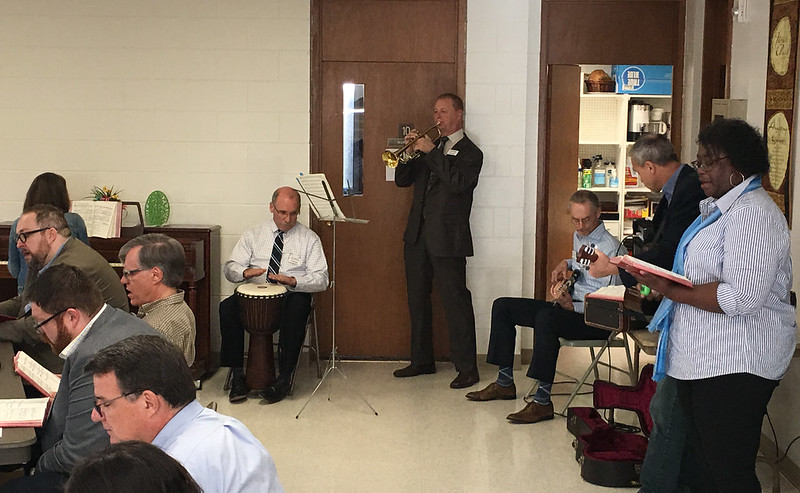 
The Connecting Council has authorized the Great Plains Conference Trustees to study and recommend the location for a single conference office during the upcoming annual conference session in June.

The decision came from a vote as part of the council’s regular spring meeting April 21-22 at St. Luke’s United Methodist Church in Lincoln. The Connecting Council – a group of 75 clergy and laity from all 17 districts that serves as the Great Plains’ decision-making body between annual conference sessions – voted unanimously to support the concept of a single conference office as part of its review of recommendations from a staff study conducted by the Rev. John Wimberly, a retired Presbyterian pastor, respected author and consultant with a resume of helping organizations – from local churches to large faith organizations – restructure to best accomplish stated goals and overall vision.

The Connecting Council examined all of Wimberly’s report by reading sections in their entirety, conducting small-group discussions at tables and then taking part in discussions with the entire group. The council then voted on each recommendation point by point.

“This study is meant to be used as a tool to help the Great Plains Conference move forward as good stewards of our resources and to be as effective as possible at changing lives and bringing hope to the least, the last and the lost in our mission field,” said Bishop Ruben Saenz Jr. “The fact that almost all of the recommendations passed unanimously shows that the findings of our consultant are things we already knew but for which we needed guidance to take actions on important matters related to our structure.”

The bishop said none of the decisions were based solely on budgetary savings, though that would be the result in a few cases. Instead, the consultant was directed to focus on methods and strategies for effectively and efficiently supporting the mission of the conference.

“This is not about money,” Wimberly told the Connecting Council in presenting his report. “Everything you read in this document is about furthering the mission of your conference.”

Wimberly’s report suggests that the conference staff will be more efficient, improve internal communication and foster greater teamwork if it is all in one location. Wimberly said that during his more than 160 interviews with staff, clergy and laity in late winter across the two states, it became clear to him that a single office would help the staff better deploy resources to local congregations for use in addressing needs in their mission fields.

The Trustees will review possible cities in Kansas and Nebraska based on property prices, construction and renovation costs, an adequate job pool for lay-related roles, access to highways, access to an airport with a favorable departure schedule, and an adequate job market for spouses of conference staff.

The annual conference session in June will vote on two matters associated with the report: first, whether to condense the three offices to one and, second, whether to approve the location recommended by the Trustees.

The other recommendations in Wimberly’s report focused on staffing size, location and functions of various roles within the conference.

“Let me tell you that whoever has been doing the hiring for your conference over the past three years had done an outstanding job,” Wimberly told the Connecting Council prior to presenting his full report. “As I say in the report, any redesign of structure or reductions in positions that I recommend have nothing to do with the talent of the people you have. Your conference is served by a very talented group of people very much committed to ministry.”

Wimberly’s other recommendations approved by the Connecting Council include: Besides the addition of the executive director position, the consultant recommended several changes in personnel within the conference. The council approved the increase of the lay leadership development coordinator position, currently held by David Brant, from a part-time to a full-time role and directed the Personnel Committee to rewrite the job description of the property manager, currently served by Patrick McKaig, to focus more directly on real estate sales and acquisition, reflecting the growing need for concentrated attention on the purchase, sale and management of properties.

Two areas of the conference’s work were approved for further study. One team will be assembled to evaluate the use of the Resource Center, which serves as a library for Christian education materials, based in the Lincoln office, and make recommendations about its continuation and staffing. Another team will evaluate best practices for conducting the duties of administrative assistants at the district level and will make a recommendation to the annual conference session in 2018 as to which offices should remain open and, potentially, determine how to perform some functions within a smaller team of administrative assistants.

The recommendations adopted by the Connecting Council also resulted in the reduction of three staff positions on the Congregational Excellence team, effective July 1. As the new director of that team, the Rev. Nathan Stanton will continue to manage a portfolio of tasks associated with new church development but also will oversee small-membership church ministries and Hispanic ministries, which currently is led by Corey Godbey.

Stanton, the current new church development coordinator, moves to his new role when the appointive year begins this summer, and the Rev. Micki McCorkle, coordinator of small-membership church ministries, already had accepted an appointment to serve as pastor of Trinity United Methodist Church in El Dorado, Kansas.

The only two recommendations rejected by the council included the creation of a new full-time position on the Clergy Excellence team to address ongoing concerns about the health and well-being of pastors. Citing budgetary concerns, the Connecting Council decided instead to add a component of clergy wellness to the position of clergy excellence director. In addition to training and development of clergy, the person in that position, the Rev. Nancy Lambert, also will spend time fostering clergy wellness and building learning, support and training systems to grow their faith and skills. The second item rejected was a recommendation to bridge the gap between conference staff and laity within Kansas and Nebraska by using community-building events such as conference staff visiting districts for training and “mission fair” style road shows so laity better understand what resources are available from the conference. The council decided the conference staff already takes part in such visits but would urge the conference staff to find more ways to take part in those kinds of events.