“Y’all need to take a day off,” Tapley, disaster response coordinator for the Great Plains Conference, told the couple.


“You can only do so much,” she added. “You need to spend some time somewhere.”

Her suggestion came a little more than two weeks after the Cleavers’ house, which they had just purchased in July, was severely damaged by the Aug. 19 storm that dumped as much as 7 inches of rain on the city just south of Wichita.

Dan was at work while Stephanie was at their home, whose back yard turned into a fast-rising creek, that night.

About 2 feet of water engulfed their living room and destroyed all of the appliances in the adjacent kitchen. After calling the police department, a vehicle arrived to take Stephanie to a local restaurant, where her husband met her.

By the next day, “the water was gone but the damage was here. The floors were just horrible,” Stephanie said.

Stephanie said the couple’s mortgage lender told them that flood insurance was not required, even though the house was in a flood plain and flood zone.
The American Red Cross made connections between the Cleavers and Tapley and the Early Response Team from the Great Plains Conference. 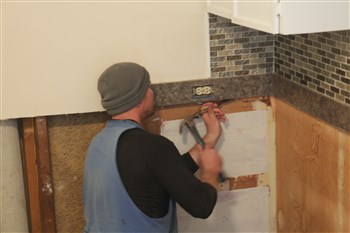 “We’ve just been going after it ever since, doing as much as we can,” Stephanie said. “The volunteers have been just amazing.”

Tapley and the volunteer ERT members helped remove several layers of flooring in the house, completing most of the task by Sept. 3.

Stephanie Cleaver said she was “very, very grateful” for the help she and her husband received after the damage to their house.

“I’m taking all the volunteers’ names down, and we’re going to have a barbecue for them once we get settled in,” she said. “It’s good payback.”