Members of a committee provided details on what is known as Mission 21 by outlining a redistricting plan that would align Texas and New Mexico based on cultural affinities, equitable workload and a balanced financial base. Known as the "missional option," the changes would only be enacted if the 2020 General Conference mandates a reduction in episcopal areas at the once-every-four-years meeting scheduled for Minneapolis. 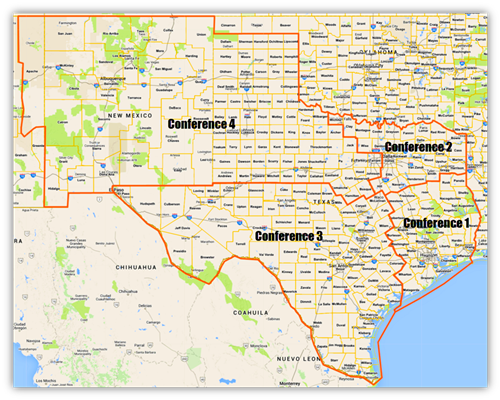 Declining populations of United Methodists in the United States, delegates were told, would shrink the number of episcopal areas not long after the next General Conference.

“By 2020, we could lose another episcopal area if there is no change in the formula,” said Mike Lowry, bishop of the Central Texas Conference. “There’s a complexity here that necessitates advance work on it.”
Under the Mission 21 plan, the newly aligned conferences would include:

“We’ve got to do something,” said Dr. Susan Brumbaugh of the New Mexico Conference, a research sociologist. “We have to be prepared.”

Bishop Cynthia Fierro Harvey of the Louisiana Conference said the redistricting also better balances the population of the Texas and New Mexico conferences.

“Some of us already have more people than we can supervise,” she said.

An additional motion referred work on the plan to the College of Bishops, “if and when” the time comes for downsizing. In effect, the vote gives the college authority to begin implementation of boundary changes if the 2020 General Conference reduces the number of bishops for the area. The Book of Discipline provides only a three-month turnaround time for implementation of the changes, meaning action could not wait for the 2020 Jurisdictional Conference in Houston.

The discussion focused primarily on Texas and New Mexico, but the team that formed the proposal did look at other alternatives. One including the Great Plains would have combined the western third of Kansas and panhandle of Oklahoma with the Northwest Texas Conference, and then would have combined the eastern third of Kansas and eastern portion of Nebraska with Missouri. Western Nebraska would have been moved to the Western Jurisdiction. The committee did not give that option considerable thought, however, because such a move among jurisdictions is not in the purview of the jurisdictional conference.