2020 CAMP CHIPPEWA DURING COVID-19 from Great Plains UMC on Vimeo.

The coronavirus pandemic-forced cancellation of summer camps in the Great Plains Conference this summer left hundreds of children and youth without a destination to explore nature and deepen their faith.

“We were all very disappointed about not having summer camp this year, but we tried to do as best we could,” said Courtney Troyer, program coordinator for Camp Chippewa. “But we don’t want to be the reason why someone gets sick, so we made decisions to make everyone safe and healthy.”

That’s why the camp, located near Ottawa, Kansas, is taking its show on the road.

The Traveling Chippewa Experience brings camp to groups in the area, trying to capture a bit of fun and faith.

“The idea came into the framework when we realized summer camp wasn’t going to be possible,” Troyer said. “We were trying to find any solution we could to still share Camp Chippewa’s ministries with churches and do the best we can for everybody.”

Although the traveling camp officially begins July 1, it was tried out on youth from Topeka First United Methodist Church on June 18.

“I know what Chippewa’s capable of, and I knew this was a great opportunity to let them experience and do their thing with young people,” said Martin, who was a counselor at Chippewa for three summers and worked part time for two other years.

All participants wore masks, and Troyer and two counselors from the camp donned gloves when passing items out to the campers. A large bottle of hand sanitizer was at the ready.

Several different games took place, with the subtle goal of learning about teamwork, initiative, and dependence on one another.

As of the June 18 Topeka trip, she said seven churches have signed up for the experience.

Watch this video from Camp Fontanelle.

Chippewa is one of several Great Plains camps that has shifted focus in the summer of 2020 to serve youth while keeping social distancing, crowd sizes and other considerations in mind.

“Family Escapes” gives access to Fontanelle activities such as basketball, hiking, jumping pillows and roller slide — although what site director Trent Meyer called the “high-profile” outings such as archery, zipline and tree climbing are off limits.

Families receive a backpack with sanitary wipes, hand sanitizer and water. Each family has its own restroom on the grounds, with the intent of not having to mingle with other groups, Meyer said.

Groups can stay during the daytime or “stay a month if they want to,” Meyer said with a laugh. Families can bring their own food to cook over the campfire, or a box with meals is available with contact-free delivery, he said.

Although counselors hired for the summer stayed until mid-June, some have volunteered to stay at the camp and assist, Meyer said.

So far, 28 families have signed up, he said.

“We’ll end up having a couple hundred people here over the summer,” Meyer said. “It’s not summer camp, but it’s something at least.”

Fontanelle also is offering a free virtual camp, including music, crafts and videos online, as well as a virtual camp counselor through a Zoom video call.

Camp Lakeside, near Scott City, Kansas, is taking a more hands-on approach with “Camp in a Box.”

“We know they’ve been overrun with virtual content, having to do school at home and being able to only communicate with their friends virtually,” she said. “We wanted to give them not only a physical reminder of camp, but activities that would bring a little bit of camp to their home.”

“It’s a way we’re keeping our eyes on the ministry,” Laing said.

Preorders are available through the camp store, with shipping beginning July 1.

Laing said she shares the disappointment of the campers that they can’t be on-site, but hopes the “Camp in a Box” leaves children and youth with happy memories and some insight into their faith.

“Not having campers on site this summer was really heartbreaking. You expect to have campers gathering around the campfire and the dining hall filled with laughter,” she said. “Developing ‘Camp in a Box’ gave me a mission when my usual mission has changed.”

Sara Shaw, camping ministries coordinator for the conference, said Camp Norwesca plans a hybrid of “Camp in a Box” and virtual camp beginning in July, and Camp Horizon is closed until Aug. 31, but is doing a camp T-shirt fundraiser.

David Burke, communications content specialist, can be contacted at dburke@greatplainsumc.org. 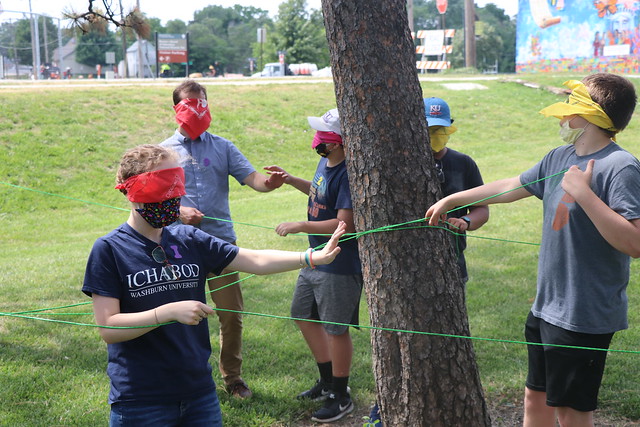 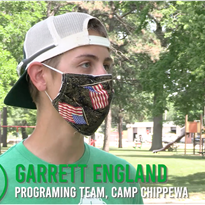