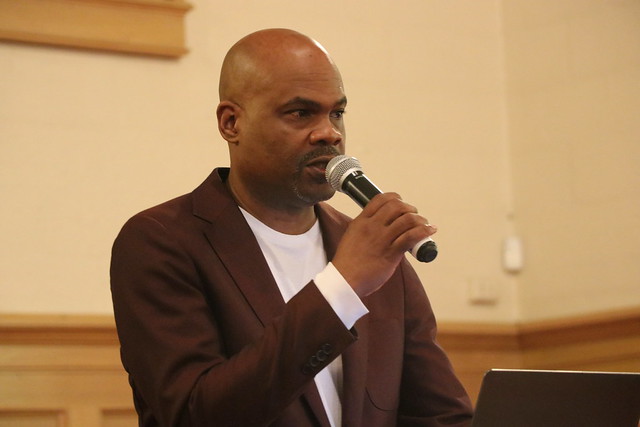 The Rev. Junius Dotson believes that churches, their pastors and leaders need to hit the “Reset” button.

Dotson, general secretary and CEO of Discipleship Ministries, returned to Wichita — where he served as senior pastor of Saint Mark United Methodist Church from 2002 to 2016 — for a leadership summit to kick off a promotional tour for his book “Soul Reset,” to be released Sept. 1.

Subtitled “Breakdown, Breakthrough and the Journey to Wholeness,” Dotson devoted half of both his presentation and his book to the “resets” that churches should make, the other half to changes that individuals should make.

“I believe every organization needs a reset at least every five to seven years,” he told a crowd of about 40 at Wichita Heart of Christ UMC. “We need to change the paradigm.”

Dotson returned to the pulpit for the first six months of 2019 as interim pastor of a predominately black church in Nashville whose pastor’s wife had died unexpectedly.

The church worked to get to know the people in its neighborhood, with prayer walks, block parties and giving away tanks of gasoline at the local convenience store.

While Dotson said he applauded the trend toward neighboring — “People want to be known, and people want to know their neighbors” — he said churches should be taking the lead.

“Nobody should be out-neighboring us,” he said.

Dotson focused the sessions about individuals on two low periods in his own life.

One was while he was performing a funeral at a church he had started in California, where he collapsed and hit his head in the middle of the service, waking up on an ambulance ride to the hospital.

The second was in 2012, when Dotson’s mother, brother, grandmother and best friend from school all passed away. While in Topeka for a meeting, he began to feel pains in his legs. On the phone, his doctor told him to immediately go to an emergency room, where it was discovered he had blood clots in his left leg and both lungs.

“My body was giving out,” he told the audience. “I had not dealt with the grief of that year.

“I kept going because that’s what I thought I was supposed to do,” Dotson added.

The incident at the funeral and the losses of several people in his inner circle forced Dotson to confront his own depression, he said.

Dotson said several pastors of large congregations have committed suicide in the past few years, and more attention needs to be paid to spiritual leaders.

“Depression does not define your ability to do great things,” he said. “Jesus invites us to be real — with Him and with one another.”

Using a baseball metaphor, Dotson said that if a player hits a home run, his accomplishment is null if his foot fails to touch first base.

“It took a crisis for me to realize I hadn’t tapped the bag at first base,” he said.

Audience members said they were moved and challenged by Dotson’s presentation.

“I really appreciate Rev. Dotson’s vulnerability, that following Christ is about being vulnerable, and too often we are trying to project the image of strength and that we’ve got everything under control — when we don’t,” said the Rev. Christopher Eshelman, pastor of Pretty Prairie and Murdock UMCs in Kansas.

“We pastors sometimes get put up on pedestals, and we’re no different than anybody else,” he added. “We struggle, too, and sharing that is an important part of ministry.”

Teresa Johnson, a member of Heart of Christ and a secretary at the church, said Dotson’s presentation was “something that my soul really needed.”

“Now I can allow myself the grieving process, but I know it goes along with the depression,” she said. “I don’t want to go through the motions. I want to be discipled, and I want to bring other people into the kingdom of God.

“This ‘Soul Reset’ was the catalyst that I need, and I didn’t realize that.”