Dotson remembered for leadership, how he connected people 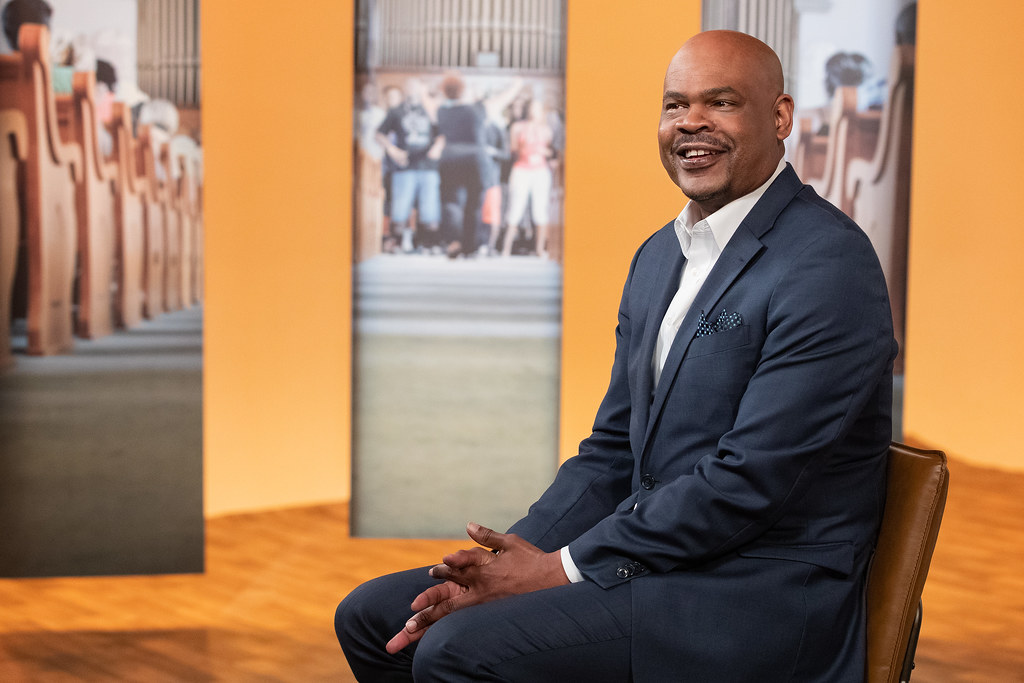 The Rev. Junius B. Dotson, the top executive of Discipleship Ministries, died late Feb. 24, less than a month after announcing his battle with pancreatic cancer. He was 55.

His unexpected death brought together United Methodists of varied theological views in an outpouring of grief and love for a leader whose ministry touched lives across the denomination.

“He had an indelible way of pulling leaders to their full potential,” said longtime friend Toska Medlock Lee, who has known him since they were undergraduates at the University of Texas at Arlington. Lee organized prayers for Dotson during his illness. United Methodists around the world signed up to pray. “His other legacy is his ability to see a hopeful future for our denomination.”

He also was one of 16 church leaders who negotiated the Protocol of Reconciliation & Grace Through Separation, the widely endorsed proposal that seeks to resolve the longtime United Methodist debate over human sexuality through a denominational split. As part of the negotiations, Dotson represented multiple centrist advocacy groups that seek greater freedom in church policies related to same-sex weddings and gay ordination.

The protocol needs the approval of General Conference to go forward, but the legislative assembly is now postponed until 2022.

The Rev. Tom Berlin, another centrist protocol negotiator, called working with Dotson on the future of the church “a friendship accelerator.”

“Junius Dotson was an exceedingly faithful disciple of Jesus Christ,” said Berlin, lead pastor of Floris United Methodist Church in Herndon, Virginia. “His love for Christ expressed itself in conviction about the nature of the church — who the church should include, how the church should be in ministry and a desire that all would know the love of Jesus.”

Other protocol negotiators with very different perspectives on the status of LGBTQ persons agreed about Dotson.

“I am a better follower of Jesus because of the time I spent with Junius,” said the Rev. Keith Boyette, who leads the Wesleyan Covenant Association, which seeks to uphold a traditional understanding of marriage and is planning a new denomination.

Boyette said Dotson labored hard to find a Christ-honoring way to resolve differences in The United Methodist Church. “Junius embodied the ministry of reconciliation and peacemaking.”

“I will miss this beloved friend — his smile that could warm any room, the way he could bring a piano to life, his passion for justice, his way of seizing teaching moments, his capacity for love, and so much more,” she said.

Bishop LaTrelle Easterling, a fellow negotiator and leader of the Baltimore-Washington Conference, said: “Junius took Discipleship Ministries to an entirely new and profound height and offered bold visionary leadership to the denomination and beyond.”

"The Great Plains Conference is grieving the news of Rev. Junius Dotson’s passing," said Bishop Ruben Saenz Jr. "Junius has been and will always be our friend and brother in Christ. Junius’ colleagues and friends describe him as discipleship-minded, dynamic, and a man of great faith and hope. Our thoughts are with Junius’ family and loved ones, and we pray for Christ’s consolation to enfold them in their hour of need."

Dotson planted Genesis United Methodist Church in California’s Silicon Valley in 1996, four years after his ordination, and saw it grow to nearly 500 members. At the time, the area saw plenty of technology startups, and Dotson saw church as “a spiritual startup.”

He later was senior pastor of 3,500-member Saint Mark United Methodist Church in Wichita for 14 years. While at Saint Mark, he expanded the church into a multi-campus ministry.

The church’s former southeast campus is now its own congregation, Heart of Christ United Methodist Church, led by Pastor Ronda Kingwood, who previously was a minister at Saint Mark.

“To be honest, I would not be in the position I’m in if it had not been for his leadership and mentorship,” Kingwood said.

Dotson remained deeply connected to the Great Plains Conference, where he had been elected a delegate to the coming General Conference. He also was a co-chair of the centrist group UMCNext.

“He was an outstanding and inspiring preacher, a great leader and a faithful friend,” said the Rev. Adam Hamilton, senior pastor of United Methodist Church of the Resurrection in Leawood. “He loved The United Methodist Church with its emphasis on evangelism, discipleship and social justice and devoted himself to helping churches to live into this vision.”

The Rev. Kevass Harding, pastor of Wichita Dellrose UMC, said Dotson was “one of my aces.”

“I’m going to miss my friend,” said Harding, pastor of the second-largest Black church in the city. “It was more than just being a colleague, we were brothers. I felt like I’ve lost a family member.”

Harding was one of eight Black pastors nationwide that Dotson gathered for a daily, 6:30 a.m. online prayer meeting called Shift-180 that was first convened last year at the beginning of the coronavirus pandemic.

“We walked with him through this journey,” Harding said.

When he became sick on Jan. 2, first going to urgent care with abdominal pains, then to the emergency room where he got the cancer diagnosis, the Shift-180 pastors were the first that Dotson told after his immediate family.

Harding said the last time he spoke to Dotson was on Sunday.

“He fought to the very end with hope. We all believed in healing,” said Harding, who had a plane ticket in hand to see Dotson on Feb. 25.

Harding said he and Dotson worked with city leaders in Wichita after racial unrest in Ferguson, Missouri, in the summer of 2014 that resulted in body cameras being put to use by Wichita police officers.

He and Dotson would exchange pulpits, Harding said, and never saw themselves in competition in their professions.

“We never had a competing spirit when it came to church stuff,” he said. “But we competed in everything else – who had the best barbecue, who could tie the best bow tie, whose team was better than the other’s team. He was a Cowboys fan; I was a Chiefs fan.”

The Rev. David Livingston, pastor of Fairway Old Mission UMC and a fellow General Conference delegate, said he was “heartbroken at a personal level. Junius was a profound, faithful leader.”

Livingston said he appreciated Dotson’s 2019 book “Soul Reset,” where Dotson talked frankly about his depression and the need for pastors to take time for self-care.

“In some ways that book felt to me like a really personal book for him. He opened himself up in that book. If part of being a leader is being vulnerable, he shared himself in the book,” Livingston said. “I think he was a model leader, and we’re going to miss having that model.”

Lisa Maupin of Lincoln, a lay delegate to General Conference, said Dotson was one of her top role models of leadership in and out of church.

“I had the joy of learning how to be a gracious, kind leader by watching him. He was an enthusiastic and passionate leader … and he was grace-filled,” she said. “To be able to watch that, I thought, ‘That’s the type of leader I want to be.’”

The Rev. Amy Lippoldt, pastor of Papillion UMC in Nebraska and a fellow clergy delegate to General Conference, joined the former Kansas West Conference with Dotson at the same time, nearly 19 years ago.

“I have known and trusted and loved and worked with him and been blessed to be friends with Junius since 2002,” Lippoldt said. “He was such a good preacher and communicator. He was a visionary leader — always had ideas on how to help the church step forward and move forward and wasn’t afraid to act. He had great leadership development in others. He was a great encourager. He had relentless optimism. He saw the least and those who needed help. He was an advocate for justice, but in a way that was very gentle and inviting.”

Dotson most recently led Discipleship Ministries, which promotes disciple-making across the denomination and houses the Upper Room, publisher of prayer resources around the globe.

In his time at Discipleship Ministries, he led the agency’s restructuring. He also initiated its “See All the People” initiative to help churches — as the nursery rhyme says — see the people in their communities and make world-transforming disciples of Jesus Christ. In promoting the initiative, he had been a frequent speaker at annual conference sessions around the denomination.

Bishop Mark Webb, Discipleship’s board president, said Dotson “modeled urgency and boldness, with a clear call to stay singularly focused on the task of equipping leaders and congregations for the work of evangelism and discipleship.”

“His legacy will be multi-faceted, but the greatest will be the depth of spirituality by which he lived and worked,” said Webb, who leads the Upper New York Conference.

Even amid the agency’s changes, Dotson continued Discipleship Ministries’ commitment to support ministries that reach out to the denomination’s growing ethnic diversity.

“Junius not only provided pastoral and professional leadership to Discipleship Ministries but was a voice and advocate for ethnic ministries and worked diligently to ensure doors were opened for the continuance of intentional ministry with the Native American community,” said the Rev. Chebon Kernell, director of the Native American Comprehensive Plan.

The Rev. Michael Bowie, director of Strengthening the Black Church for the 21st Century, said Dotson had deep experience with the Black church, and it showed.

“He was able to provide leadership and experience to SBC21,” Bowie said. “He saw us as strategic partners and key players in where Discipleship Ministries was going.”

“When I heard the news of my colleague and friend Junius Dotson’s passing, the exhortation of Hebrews 13:7 immediately came to mind,” said Erin Hawkins, his predecessor as the table’s convener. The Bible verse says: “Remember your leaders, who spoke the word of God to you. Consider the outcome of their way of life and imitate their faith.”

He said he first learned something was wrong with his health earlier in January when searing pain in his back and stomach sent him to the emergency room. Doctors informed him — and tests confirmed — that he had stage 4 pancreatic cancer with metastasis to the liver.

He said he hoped to use his experience to raise awareness of how pancreatic cancer especially afflicts African Americans.

“He and I once spent an evening sharing frankly about our experiences and questions about the scourge of white privilege and racism,” Milford said. “Over a meal he invited me to disclose my story and with unflinching honesty and trust shared his own. His prophetic and pastoral witness deepened my understandings and sharpened my inquiry.”

“His passion for justice and full inclusion impacted the life of the UMC as he made his voice clearly heard and known in every place he served,” she said.

Dotson died surrounded by his family. Information on funeral arrangements will be coming soon.