The Rev. Orlando Gallardo says he is “heartbroken” and “outraged” that President Donald Trump has called for the end of the Deferred Action for Childhood Arrivals, or DACA, program that has kept himself and approximately 800,000 foreign-born residents in the United States. 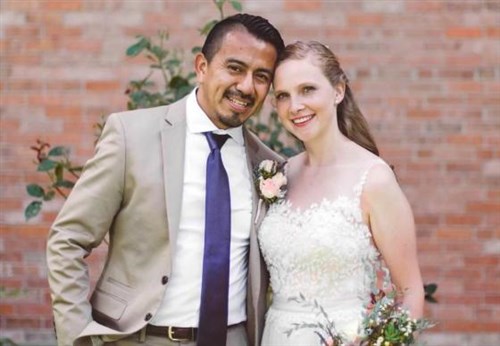 Gallardo, associate pastor of Trinity Community Church, a United Methodist congregation in Kansas City, Kansas, calls the action “shameful." But the 34-year-old said the Sept. 5 announcement did not take him by surprise.

“I struggle to know how to move forward with people who voted for Donald Trump, even though he began his campaign saying he was going to do this,” said Gallardo, who came to the United States from Mexico when he was 15.

Trump, Gallardo said, scored by saying Mexican immigrants were criminals to play to a certain population.

Gallardo feels as he has a secure future – he married an American citizen in July 2016, so he may be able to stay in the country even if DACA expires next year.

But he feels empathy for others who may face an uncertain future.

“The hope I have right now is that people will stand up and speak up and call their representatives and their senators,” he said. “We’ve got to stay something. We can’t stay quiet during this time.”

DACA, Gallardo said, needs a leader the way the Rev. Dr. Martin Luther King Jr. spoke up for civil rights in the 1960s.
“We need to start speaking up and denouncing evil when we see it,” Gallardo said.

The program, enacted in President Barack Obama's administration, offered protection from deportation for people brought to the United States at a young age, when they couldn’t make the decision for themselves. To be part of the program, participants must meet certain requirements, including having a clean criminal record.

The Rev. Kalaba Chali, mercy and justice coordinator for the Great Plains Conference, said other clergy in the conference face uncertain futures.

“There are several we know about in Nebraska, but Orlando is brave that he wants his story to be out there,” Chali said.
Chali also encouraged those concerned to contact their lawmakers.

“The more people in your constituencies say ‘This is important,’ the more it becomes an urgent matter for our senators in Nebraska and Kansas,” he said.

DACA stories in the media, Chali said, have lacked Christianity and the heartfelt nature of those such as Gallardo.

“The churches have not been putting out our stories like Orlando’s story. We have been in ministries all over the conference. We know the people in the churches. We know the impact they are having,” Chali said.

“We leave the narrative to be crafted by people with no idea of who these people are except what they see on CNN,” Chali continued. “There is a narrative out there of people who have no personal touch with a DACA person. I think the church could change that to say, ‘Here is what it happening.’

“We need to bring up the stories of faith, and say, ‘Here is what the people of DACA are doing in our churches.’”

The Rev. Ron Holland, an elder at Trinity Community UMC, said he is among those writing letters of support on Gallardo’s behalf.

Holland – whose son, the Rev. Mark Holland, is both senior pastor of Trinity UMC and the mayor of Kansas City – said the congregation supports Gallardo, though not 100 percent of them.

“He is doing a good job here, and all you have to do is look at what’s going on in our country around the issue of immigration to know that there is no consensus,” Holland said. “We talk about stuff (in church). We don’t sweep that under the rug – the pastor, nor Orlando, nor I.”

Many United Methodist churches, Holland said, aren’t even talking about immigration the way they should.

“None of us believe silence is the answer to this uproar,” Holland said. “Our congregation is out front about the struggles of society, and in our church.”

Gallardo has many backers in Trinity, Holland said.

“Orlando has very strong support here, and it would be nuts to think that’s unanimous,” he said. “Orlando is not stirring up a storm. Orlando is the face of immigration in our country.”

Read a January profile of Gallardo, from the United Methodist News Service.