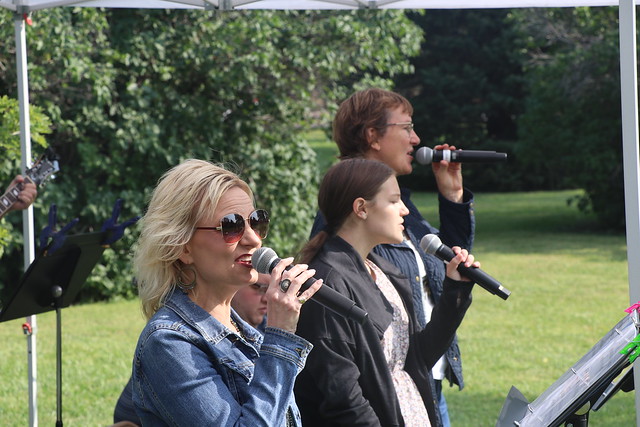 While other churches have experimented with outdoor worship services during the coronavirus pandemic, it came as second nature to Garden City First United Methodist Church.

The southwest Kansas church has been having outdoor services – first in Lee Richardson Zoo, then in neighboring Finnup Park – since the late 1990s, began by the Rev. Dr. Bob Cousins. Other years the church has outdoor services during the summer months, while in 2020 they began in May and are scheduled to conclude Oct. 4.

Crowds of as many as 300 have brought their lawn chairs to the 9:30 a.m. worship in the park. In previous years, the service replaced the 8:30 a.m. service, but in the time of COVID-19, it is the only Sunday service.

“Given the context we are in at the moment, the park is the best, because people are able to come, they are able to social distance, which they could not do if it was inside the sanctuary,” said the Rev. Charles Nyamakope, Garden City’s senior pastor since July. “And the little ones are dancing, they’re playing. That environment wouldn’t be there in the sanctuary. In the park, people sit where they want to sit, they bring their own chairs and everything.”

The church’s praise band and singers are under a portable canopy, while Nyamakope delivers his sermon with a music stand as a lectern, which fell to the ground during some rather gusty Sunday morning winds in mid-September.

The Rev. Joel Plisek, associate pastor, said expanding worship in the park made perfect sense in the time of pandemic.

“We had the opportunity to not worry about cleaning and all that stuff since it was out in the park,” he said. “It’s a safe place.”

Plisek, who served as interim senior pastor for several months before Nyamakope’s appointment, said he enjoys the outdoor service.

Having worship in the park was suggested to Nyamakope during the first few months of COVID, when he served as pastor of Wallace and Maywood UMCs in Nebraska, but it did not come to fruition.

He said he was surprised at his first Sunday in Garden City.

“I didn’t know in what magnitude people would come, how many there could be,” Nyamakope said. “Other places there would only be a few who would come, but … I was surprised during my first worship there were more than 270 in worship. On a good Sunday, we have more than 300. I don’t know what it would look like if it was in the sanctuary. At one time we had more people coming to the park than would come to the sanctuary.”

Sunday morning worship services are scheduled to return to the sanctuary Oct. 11. Earlier in the weekend, a “Saturday Night Light” service draws 15 to 20 people, about the same as before coronavirus. It has moved from the chapel to the sanctuary to give me opportunities for social distancing.

Three ushers — wearing masks and gloves and offering hand sanitizer and bulletins — are at three entry points to the park. A tall, cylindrical basket is used for gathering the offering.

Tim Miller was one of those ushers on a recent Sunday.

“This year it’s a whole lot more” than in previous years, he said. “They get to come to church. It’s just much better in person. It’s good to get to see faces and (make) personal contact.”

Many of those attending the worship forego masks but keep their distance.

“They’re spread out well, except for family groups and people who hang out around each other all the time anyway,” Miller said.

Plisek said he was told repeatedly how welcome the park service has been.

“I think people are just wanting to have the service. They were hungry for the service,” he said. “So when they had an opportunity to be a part of the service, they jumped on it.”

Among the fans of the service are Cassy and Jeff Boyd, whose 10-year-old son, Braeden, was baptized during the worship at the zoo.

“We enjoy being outdoors, and it’s nice, very nice,” Cassy said. “There’s just a little bit different sensation when you’ve got the sunshine on your back and fresh air.”

“Obviously, churches are more than just the building, but once you get outside it’s a different atmosphere, a different environment,” Jeff added. “You get to see everybody and interact in a different way than you would normally.”

If the thought of an outdoor service attracts people, it’s the church’s newly appointed pastor – and its first African-born worship leader – that keeps them coming back.

“People want to see what he’s all about,” the Zimbabwe native said with a laugh.

Indeed, those attending the park worship service are echoing his “Mangwanani” – Zimbabwe for “Good morning – greeting and responding to his request for “pom-pom,” another term for applause.

Nyamakope is working toward his doctorate in leadership excellence from Wesley Theological Seminary and came to the United States after leading congregations as large as 3,000 in Zimbabwe. He emigrated to the United States five years ago, and was encouraged to come to the Great Plains Conference by the Rev. Linda Louderback, Wichita West District superintendent at the time and an advocate for the Chabadza partnership between the conference and Zimbabwe.

Although Nyamakope said he regrets not being able to meet members of his congregation in person as he would have before the pandemic, he has met with officials including the Garden City police chief and city manager and Finney County sheriff, getting to know their concerns and how the church can help.

While no one could have predicted seven months ago the effect that COVID-19 would have on the world, it is equally difficult to prognosticate what might happen next summer.

But if the pandemic continues, Plisek said, Garden City First will know what to do.

“I guess we’ll have to see what happens with COVID and everything,” he said. “It’s nice that we have that option, and the people love it, which is a good thing.”