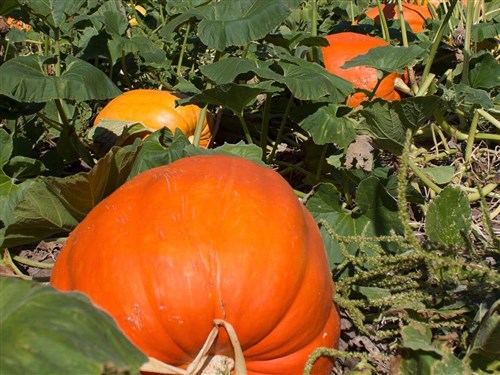 It’s fall in the Great Plains, and that means that, from Starbucks to farmers markets, pumpkins are everywhere.

Including the First United Methodist Church in El Dorado, Kansas.

The church has concluded a five-week series, “Lessons From a Pumpkin Farm,” that is part of its annual “Discipleship Pathways” lessons, said the Rev. Andrew Conard.

“We try to look at discipleship more deeply and have some fun along the way,” said Conard, pastor at El Dorado since 2012.

The pumpkin idea first sprouted not long after Conard and his wife, Nicole – coordinator of young leadership for the Great Plains Conference – moved to El Dorado, when they discovered a pumpkin patch in a quest to catch some local flavor.

“Their farm is just north of here on Highway 77. They’ve got great pumpkin patches and things for kids to play on,” Conard said. “Each season, some days we’d be the last ones there and shut down the place.”

They got to know the pumpkin patch owners, Carroll and Becky Walters, and invited them to First UMC. The couple started attending about a year and a half ago, Conard said.

Noting that Jesus often used agricultural metaphors in his sermons – such as the sower sowing seed on good land, and God is the vine and we are the branches – Conard linked pumpkins to faith. Sermon topics included “Good Soil” (the importance of worship), “Stay Connected to the Vine” (how faith grows), “Planting for the Harvest” (giving and the Christian life), “Walking and Weeding” (the power of serving together) and “Harvest Time” (sharing a mission from God), which concluded the series on Sept. 18.

The sermons included video interviews with the couple, who shared their own leap of faith story about planting pumpkins on former cropland, including the skepticism of their neighbors. Their pumpkin patch has been named one of the best in the Midwest by Travel & Leisure magazine.

The Walters also gave an illustration in giving back, by donating their biggest pumpkin for the church’s annual Lord’s Acre supper and auction. On the Sunday services right before Halloween, church members will be given a free ticket to the patch and an invitation to a potluck dinner.

“We feel like we’re leasing (this land) from the good Lord. We’re blessed,” Carroll Walters says in one of the videos. “We’re just here to this earth to take care of this land.”

“People had a lot of fun” with the series, Conard said. “Certainly the metaphor was fun and looking at a different angle, as well as looking at this place that’s not too far from us.”

It’s an example of “the power of peoples’ testimony and people sharing their story,” Conard added.