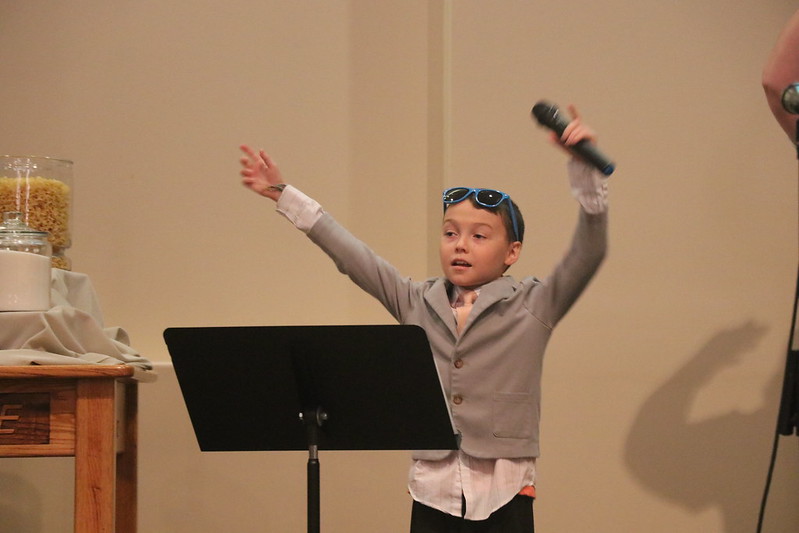 “We’re gonna have some fun today,” she enthusiastically declared before the start of 9 a.m. services on Aug. 14.

Indeed, at the beginning of the service the Rev. Ross Baker warned that no one was too young, too old, too big, nor too small for the events of the next few hours, where traditional worship would be shelved in favor of audience participation songs, a skit that served as a sermon, personal pizza preparation, scavenger hunts, and Baker getting pelted — repeatedly — with whipped cream pies in the face.

The day of fun, food and faith was a first for Eudora, and replaced the church’s traditional vacation Bible school.

Baker said the church did virtual VBS during 2020 and ’21 because of the pandemic, and the church’s VBS director stepped back from the role earlier this year.

A three-person education leaders group began to prepare in July for the special day.

“I had this idea about having an intergenerational time where the parents would do the skits so when the kids were asked to do skits they wouldn’t be as apprehensive,” said Eva Deonier, one of the leaders. “I threw that idea out there, and they all ran with it. Everybody brought ideas, and it all evolved into what it is today.”

Elizabeth Schmidt, another leader, said part of the day would serve as a celebration for making it through the pandemic.

“We just wanted to generate some excitement, you know,” she said. “During COVID we all had to be separate and weren’t able to do some of these things. We wanted to bring in that excitement, the teamwork we’ve had as a church, and jumpstart that fire.”

A popular VBS theme across the country this year was “Food Truck Party,” and Eudora leaders said it inspired them for the day.

“Food is always a good idea. Everybody loves to eat, right?” said Carol Schmidt, another leader and Elizabeth’s sister-in-law.

Baker and his wife, the Rev. Amanda Baker (pastor at Baldwin City First and Ives Chapel UMCs, which used the Food Truck VBS material), were familiar with Flatlanders, a Baldwin City pizza restaurant-turned-food truck, which arrived on site with a portable pizza oven.

Part of the money for the pizza came from a Planter Incubator grant that Ross had received from the Great Plains Conference to teach cooking to the children in the church’s preschool.

When not cooking pizza, participants took part in a scavenger hunt (with a cellphone photo component) throughout the church, played word game puzzles relating to the Lord’s Prayer, and made greeting cards for the church’s shut-ins and persons the church works with a Family Promise group. Those who entered the church brought donations for a local food pantry.

The day concluded with the promise that Baker would get a pie in the face from a random child in the group. It turned into the pastor repeatedly getting smashed in the face with paper plates full of whipped cream (aluminum pie plates hurt, the participants were told) and then getting washed off with 5-gallon buckets of water.

Worship services that began the day included audience participation songs such as “Days of Elijah,” “Every Move I Make” and “I Wanna Be a Sheep,” led by the Bakers’ three sons, especially 10-year-old Charles, who already has the makings of a worship leader.

The sermon was a sketch by The Skit Guys about Jesus feeding the 5,000, with actors young and old repeatedly interacting with the congregation.

Dozens of children were among the 75 in attendance, far more kids than are usually at services, the education leaders said.

“We’re just trying to encourage people, as summer is over, to come back and bring a friend,” Elizabeth Schmidt said. “Hopefully we’ll build that excitement and keep them coming regularly.”

Education leaders don’t want to wait another year before another gathering.

“I wouldn’t mind doing some form of this later this year, to keep that excitement,” Deonier said.

“Our wheels are turning all the time,” Elizabeth Schmidt said.

“I’ve had some people asking if we can do this every week,” Deonier said with a laugh.

Baker said he’s uncertain whether special days like Eudora had would replace VBS but sees it as a possibility.

Finding children with available time and adults willing to work on VBS for a week makes the one-day event more appealing, Baker said.

“Our kids are going in so many different directions anymore, and sometimes doing one big event and getting a lot of people behind it is sometimes easier to pull off than expanding it to a weekend or a whole week,” he said.

Baker, beginning his fifth year at Eudora, said he was pleased with the event.

“I see good promise in it, and possibility,” he said. “The Holy Spirit often goes way beyond what we think is possible.”