Great Plains interns show leadership at, away from pulpit

The Rev. Nicole Conard quickly quashes the old church cliché about the “leaders of tomorrow.”

“These are not the leaders of the future,” Conard, coordinator of young leadership for the Great Plains Conference, said of summer interns. “They lead right now. They are leaders.” 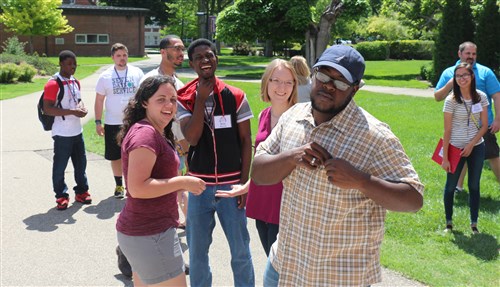 Most of the 33 college-age students settled into Kansas Wesleyan University in Salina on May 24 to begin 10-week internships in the Great Plains.

Although remnants of previous internship programs – the Micah Corps program related to mercy and justice issues in Nebraska and the Vacation Bible School leadership in the former Kansas West Conference – are still in place, this is the second year for a full-fledged program in the Great Plains.

“Last year it was a concerted effort for all intern-type programs that we had previously to come under one umbrella,” Conard said. “That gave us the creativity to add other internships programs that had not been a part of any of our previous conferences.”

“Last year was our first, pilot year,” Conard said. “This year we have some sense of rhythm of how we work together and how these internships can work together.”

“We can wrap this up in a way that allows the learning to continue on after they leave,” said the Rev. Ashlee Alley, clergy recruitment and development coordinator.

After a praise-and-worship service, which included a sermon by the Rev. Alan Gurupira, assistant to the bishop of the Zimbabwe Conference, the interns discussed church leadership and how it doesn’t necessarily mean becoming an ordained minister.

“In a lot of conferences, you can be an apprentice to a pastor, to learn that,” Conard said. “We’re encouraging leadership no matter what vocation they go into. They can still serve God and their neighbor in many different ways.”

Conard said applications for the internship program were nearly double the number of students who were hired.

The interns come from not only across Kansas and Nebraska, but New York, Pennsylvania, Wisconsin and Iowa.

“The word is getting out about what we’re doing in this conference,” said the Rev. Kalaba Chali, Great Plains mercy and justice coordinator.

Conard agreed, saying that she has received inquiries about the Great Plains internships from conferences across the country.

Several of the interns have returned from last year, some in different roles and others in leadership tasks.

“I just like working for the church and being able to help people during the summer,” said Kristina Henrich, a Wilson, Kansas, native and Fort Hays State University student who is supervising the VBS interns. “It’s fun and entertaining and gives me an opportunity to get away for the summer but still explore, but not have to spend as much to explore.”

Amy Kenyon, Omaha, who just graduated from the University of Nebraska-Lincoln with a degree in secondary English/theater education, said that like other internships the Great Plains offered a chance to travel and meet people.

But there was also a fulfilling aspect.

“It’s an opportunity to do some self-learning and do something useful with your summer – a moment of growth rather than relaxation,” said Kenyon, a Micah Corps member.

“Being young adults, being in a very transitional time of life, we’ve been talking a lot about discernment, about what path God’s calling me to,” she added. “I’m having space to figure out what that is for myself, as well has helping interns figure it out for themselves.”

Alley said the goal of the Great Plains staff members was to provide a transformational 10 weeks.

“The internships are formative experiences,” she said. “I think this is a summer they’ll remember for a lifetime.”