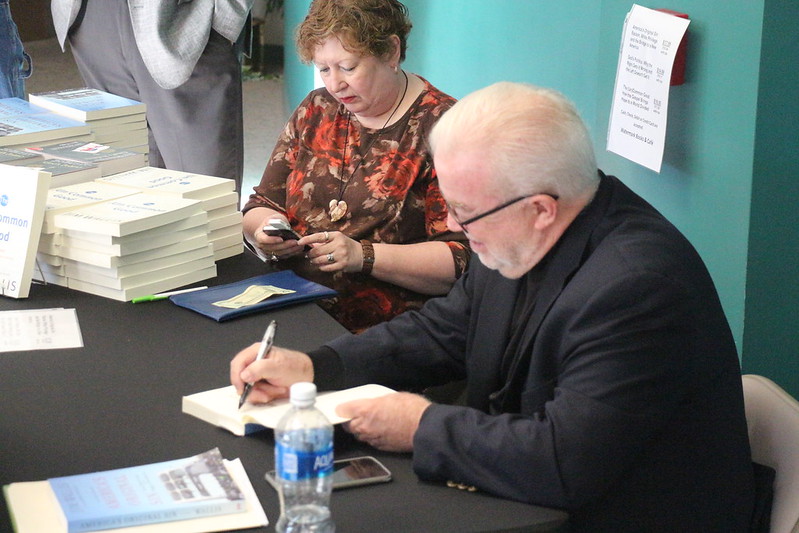 The president and founder of Sojourners encouraged members of the Great Plains Conference to “go deep” during an address Oct. 28 on “the role of the church in a politically/racially divided nation.”

“It’s places like this that will turn this country in a new direction,” Jim Wallis told an audience at Saint Mark United Methodist Church in Wichita, as well as those in several watch parties throughout Kansas and Nebraska and those watching the livestream from the Great Plains website. (See the recording of Wallis' remarks.)

Wallis said he appreciated that the event, part of the annual “For the Transformation of the World” gathering, was presented by the Mercy and Justice team from the Great Plains. Mercy, he said, is “pulling a body from the river.” Justice is going upstream to see how the body got there in the first place.

Sojourners is a group formed to inspire hope and build a movement to transform individuals, communities, the church and the world, according to its website.

A Detroit native now based in Washington, D.C., Wallis said he learned about racial tension at various points in his life, from being an elevator operator to coaching Little League Baseball.

“I learned the most about the world by going places I was never supposed to go,” he said.

Religion, he said, can overcome many of the obstacles that racism presents in America.

“We’re not going to be able to heal those divides unless we get very theological,” Wallis said.

Fighting racism, Wallis told the audience, does not need to fall along political lines.

“This is much more than about politics and who wins the next election,” he later said.

Surveys predict that by 2040, the United States will no longer have a white majority, Wallis said.

“We’ll be a majority of minorities for the first time in our nation,” he said.

Christians can take the lead to smooth that transition.

“The deepest thing at a hopeless time is the offering of hope,” Wallis said. “Hope is a decision you make because of a thing called faith.”

However, Wallis said he currently sees “the most divided church I’ve seen in my lifetime, since the civil rights movement.”

“Our sociology has trumped our theology,” he added.

Among the fans of Wallis is the senior pastor of Saint Mark UMC, the Rev. Robert Johnson, who welcomed the audience to his church.

“I’m really concerned about our nation right now,” said the pastor of the traditionally African-American church. “Not the right or the left but the soul of our country.”

Johnson said he considered Wallis a “mentor from distance,” because Johnson has read so many of Wallis’ books.
An estimated 800 people either watched Wallis’ presentation in person or through the livestream. An archived video of Wallis’ speech and a Q&A session has been posted to the conference website.

Some audience members came from six hours away, according to speakers. A van full of people of Emporia made the hour-plus trek to Wichita to hear Wallis.

Among those was Gaile Stephens, a member of First United Methodist Church in Emporia.

“(There were) things I’ve been thinking for a long time, and he put words to them. Especially right now with the division in the nation,” said Stephens, an assistant professor of music education at Emporia State University. “It’s scary seeing people celebrate those viewpoints.”

Wallis’ themes were echoed in the closing worship by the Rev. Sarah Marsh, associate pastor of First UMC in Manhattan and a member of the conference’s Mercy and Justice team.

“Are we fulfilling what Jesus wants us to do?” Marsh asked. “(We say it’s) too hard, too controversial or too divisive. That’s a copout.”