'I want to be Pastor Nick before I'm Coach Talbott' 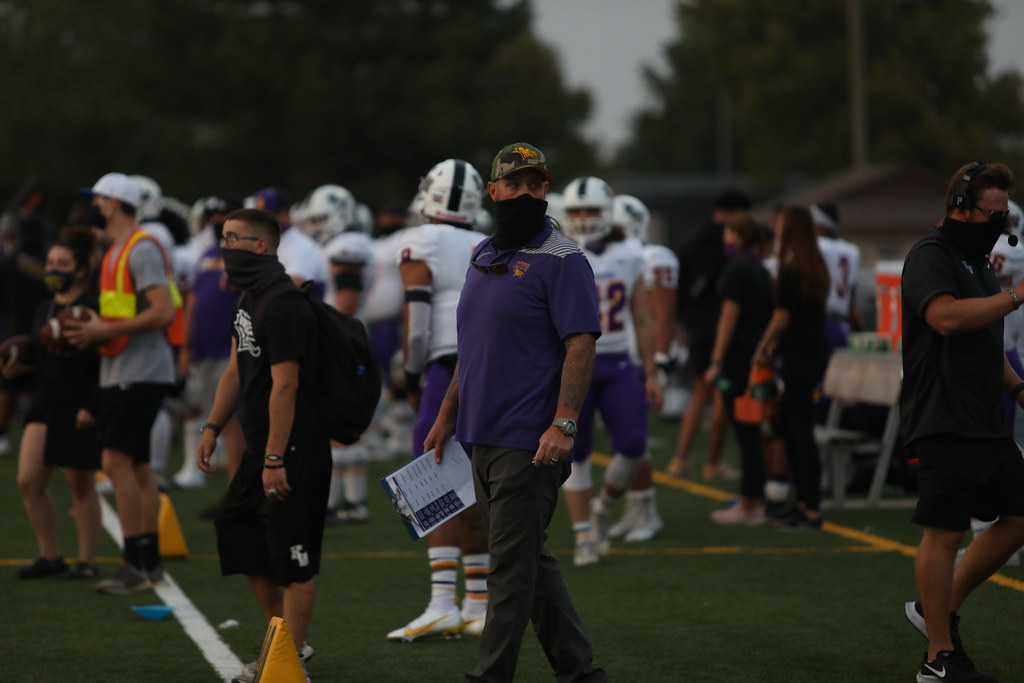 As the clock ticks down the minutes until kickoff for Kansas Wesleyan University football, Nick Talbott strides the field of the Graves Family Sports Complex.

He claps his hands and encourages players through warmup drills one minute, stops and chats with the refs the next, and even greets one of the Coyotes’ opponents, on this day undefeated Southwestern College.

Talbott is in his first season as wide receivers coach for the Yotes and is the team chaplain, but also — and more importantly, the 38-year-old constantly reinforces — he is the lead pastor at Salina University United Methodist Church, just across Claflin Avenue from the stadium.

“I wish I could say I’m on the football field because I’m a great football coach,” he said. “No, I’m out on the field because I want to be Pastor Nick before I’m Coach Talbott.

“To be able to be there every day at practice, to be able to see the ups and downs of the season, has allowed for conversations and things to take place within the relationship between player and coach and player and chaplain has just been remarkable, not only for the players but for the staff,” Talbott added.

Talbott is one of two clergy-coach connections for the football team. Mark Hendrickson, in his second season as running backs coach, works with both campus ministry at KWU and at University UMC while working on his Course of Study to become a local licensed pastor.

Hendrickson also is the father of head coach Brooks Hendrickson, but there’s no nepotism — the senior coach has a 30-year college coaching resumé that includes stints as an assistant at Georgia Tech and Iowa, and head coach at Western Illinois for 14 years.

“Nick brings something very unique to a college football program,” Mark Hendrickson said. “He’s a senior pastor of a church that’s literally 100 yards from where we practice and play. He’s here at every practice, he’s at every game. His presence is a very unique and positive situation.

“The players know what he represents, and many of them enjoy that. When he comes onto the practice field, you’ll see a lot of players go over to him and say hello and give him a handshake,” he added. “If we weren’t in this (COVID-19) situation, they’d give him a hug.”

Like a long spiral from the quarterback to a wide receiver, Talbott’s occupation and avocation have always made a solid connection.

After 13 years as a football and wrestling coach as well as teacher at the high school and college levels — including being one of the youngest assistants in the country while at Bacone College in Muskogee, Oklahoma, his alma mater — Talbott entered fulltime ministry in 2013, thinking he’d leave coaching behind.

“I kind of stepped away from that lifestyle for a little bit, but in the last two places I’ve been, Hillsboro and Stockton-Woodston, I was also a football coach. It’s something I’ve dabbled in,” he said. “My wife said it’s something I’ll never be able to give up. It’s something in my blood.”

At Hillsboro, he served as a youth pastor under the Rev. Morita Truman, who saw potential in him beyond his job description.

“Just watching him, he had an ability to connect with kids, and he had a real passion for impacting kids’ lives,” Truman, now pastor at Great Bend First UMC, recalled. “And he reached out to families. It wasn’t just kids he was relating to. He was relating to families. He found a way to do that in his own unique way.”

He bonded with the youth and their parents through his hobbies of sports and hunting.

“He always had that passion for sports, but he saw it as how he connected in ministry,” she said. “It was a way to get into kids’ lives and families and get involved deeper than football or wrestling or whatever. That was definitely a door he saw open.”

Talbott said he was still uncertain of his career decision but talks with Truman solidified his calling.

“Morita really pushed me with my theology with my understanding of scripture. I owe her so much,” he said. “Morita was the catalyst, the one who really took the spurs to me and kept me going.”

Talbott grew up in Wichita and was a star offensive lineman at Wichita West, but never went to church until he was about 16 or 17, when he ventured to the Southern Baptist church behind his house.

“They were there with open arms and really accepted me and our family,” he said, adding, “They put a microphone in my hands.”

To the point where he was leading Sunday night services, Talbott said he had a revelation when his wife, Amber, gave birth to the first of their three children, a daughter, in 2003.

Holding his baby girl for the first time, “I wanted her to do everything that I could do,” he recalled, and realized being raised as a Southern Baptist would put limits on those goals.

Amber began going to Wichita Asbury UMC, and eventually Nick joined her. He found its pastor at the time, Rev. Dennis Wallace, to be “full of hope and excitement.”

He began to feel a subtle call to ministry in The United Methodist Church.

“It was a nagging, that was the only way I could describe it, an internal message that I need to keep going and going,” he said.

“It was a hard choice,” added Talbott, who now has a year and a half left to complete his Course of Study, a five-year program designed to train fulltime and parttime local pastors. “I knew once we went there was no going back.”

University United Methodist Church already had been making inroads to make more of a connection with Kansas Wesleyan, said the Rev. Dee Williamston, Salina and Hays districts superintendent, before Talbott arrived in July 2019.

“Nick stepped into a good revamping of ministry, where the previous pastor really worked hard to begin to connect between University and the campus and did really good work,” she said. “That’s why it’s so successful now.”

The church has opened separate rooms for campus ministry for male and female students and makes the church’s board room available for student meetings. Campus minister Scott Jagodzinske moved the “Monday Night Alive” worship service to the church at the beginning of the school year.

“One of the goals when I came here was to be a church that was really campus-connected,” Talbott said. “The identity, the heartbeat of this church is to be in mission with Kansas Wesleyan, to almost treat that as our small town in the Salina community.”

Thompson, Talbott said, wanted him and the church to be part of the KWU fabric.

“From the moment I stepped into this church building and this campus, he has been so welcoming and empowering,” Talbott said of KWU’s president. “He constantly invites me, constantly makes me feel like I’m in the loop.”

He got to know the Hendricksons as well and found many common bonds.

“After hearing my story and getting to know them a little bit, I made the ask,” Talbott said. “I said, ‘What can I do that is completely volunteer, that if I have something to do for the church that I have to tend to and I have to be away, is OK?’”

Talbott had a “trial run” last season, delivering a 5- to 10-minute devotional after Friday night practices.

“We’ve really created this infusion of campus ministry into our football team,” he said.

He orchestrated chaplains for all of the KWU sports teams and said associate pastor Annie Boswell has been making inroads with members of the Coyote men’s and women’s soccer teams.

“She has been a sparkplug of ministry to this church,” said Talbott, who also will be the chaplain for the Wesleyan baseball team this spring.

Talbott said he explained his role at the first football team meeting of the season.

“Before I’m ever coach, I’m pastor,” he said. “If you ever need to have a conversation, please see me.”

Mark Hendrickson said it’s evident that Talbott is effective in both of his roles.

“We’re seeing more student involvement across the street from campus for university students,” he said. “There’s no question the commitment to that from Pastor Nick is making a difference.”

It doesn’t take much of a stretch for Talbott — who has coached from the collegiate level to Kansas 6A to eight-man football — to see a connection between being a coach and a pastor.

“It’s the same thing,” he said. “In football, we say when you go to a new program and learn a new offense or learning a new playbook, ‘It’s all the same stuff, you’re just learning it in a different language.’”

They both come back to being an effective leader.

“No one cares how much you know if you can’t round people up to follow. The same thing with the church. You can have all the biblical knowledge in the world, you can be the most talented preacher they’ve ever seen,” Talbott said.

In the battle of two undefeated Kansas United Methodist colleges on Oct. 17, Southwestern doubled up on Wesleyan, 42-21. Coach Hendrickson gathered his players in the end zone for a postgame pep talk but didn’t turn them over to Talbott for the traditional game-closing prayer.

Talbott shrugged off the loss and skipping the prayer, but said the players knew he’d be there for them.

“They’ll catch up with me tomorrow,” he said.