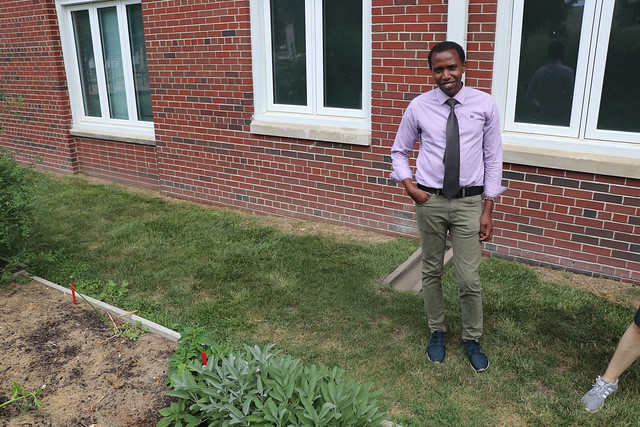 Peter Karanja will never forget how welcome he felt the first time he entered a United Methodist Church.

With his parents and four siblings, Peter, a high-schooler at the time, moved from their hometown in Kenya to Naivasha, a city of about 200,000, after unrest broke out following a general election in 2007-2008.

“That place was not safe,” recalls Karanja, now 32.

In the process of looking for a place to worship in Naivasha, the family visited a United Methodist Church.

“It was just so amazing. They were very hospitable to us,” he said. “They were very supportive. They gave us groceries, and they came to see us. It was so different from what I had experienced. It was kind of a Methodist thing.”

His father, who sold men’s clothing, was given a startup kit for a new business by the church. His mother became a lay preacher. His sisters, whom he described as shy, joined the praise choir.

And teenaged Peter was encouraged to join the young people’s group.

His family remains in Naivasha and at that same church, he said.

Karanja remembers that spirit of welcoming and inclusion as he takes further steps of his own into the ministry with a pastoral internship this summer at Omaha Hanscom Park UMC.

“There are some things that make me super-excited here,” he said with a smile. “There’s so much to do here.”

The Rev. Chris Jorgensen, in her fourth year as Hanscom Park pastor, says the route taken by Karanja from Africa to Omaha could only be chalked up to the Holy Spirit.

As a seminarian at Drew Theological School in Madison, New Jersey, six years ago, Jorgensen was required to spend time overseas. She recalls signing up for “Africa, literally not knowing what country in Africa I was going to,” she recalled with a laugh.

“I got other people to sign up with me. We all signed up,” she said, discovering it was a two-week Global Christian Ethics class at Africa University. “Zimbabwe? OK,” Jorgensen recalled.

During discussions between Drew and Africa University students about subjects such as the environment, human sexuality, and AIDS, she remembered the spark of one of the students — Peter.

They stayed in touch via social media, and he asked her to be a reference for him to be accepted in the Global Mission Fellows program, where he worked in Germany with Syrian refugees.

“His openness to go where God calls him is something I was immediately struck by,” Jorgensen said. “I was just like, ‘Holy cow!’”

After having a pastoral intern last summer at Hanscom Park, Jorgensen was hoping to host another young person on the staff.

At the same time Karanja, completing his second of three years at Drew Theological School, was looking for work as an intern.

“He had previously been talking to the Iowa Annual Conference about immigrant and refugee work with them,” she recalled. When she asked him, “Peter responds to me and says the Iowa thing isn’t going forward. But I did apply for this internship program in the Great Plains Conference.

“I’m like, ‘Peter, that’s my conference!’ I just thought, that was it, he’s coming to Hanscom Park,” she said with a laugh.

Karanja’s life experience came into play immediately when he arrived at Hanscom Park.

The church’s bountiful garden on the south side of the church was helped by the former worker in the flower industry in Kenya.

“When I came in and saw that garden … it was super organized, and people were taking pictures. It was just beautiful,” he said. “We have a wonderful crew that works together. It’s just an open space, very healthy with harvesting and weeding.”

The garden is also the setting for Hanscom Park’s return to live worship, where as many as 78 people sat at social distance on a Thursday night, most recently to hear Karanja’s sermon based on the garden's rare burgundy sunflower.

Karanja, whose internship costs are split between the Great Plains Conference and Hanscom Park, was approved before the coronavirus pandemic changed the lives of churches worldwide.

“He’s had a really good education on how you pivot and respond to things,” Jorgensen said.

That flexibility can be said for Hanscom Park and Jorgensen as well.

On a Wednesday afternoon, not long after restrictions began, Jorgensen answered a knock at the church door. It was the chaplain from the nearby Tyson Foods plant, which had been temporarily shut down.

After brief discussions, Hanscom Park agreed to be the host for a group of Ethiopian immigrants and refugees led by “Chaplain Eddie,” and he supplied $4,500 in grocery cards for the church to distribute to the disadvantaged in the church’s neighborhood.

“Because of being open to those kinds of things, what we’ve been able to do with immigrants and refugees this summer wouldn’t have happened without our relationship with Chaplain Eddie,” Jorgensen said.

Karanja has been instrumental in working with the refugees and immigrants who meet at the church, she added.

“I’ve seen the Holy Spirit work in so many ways that there is a lot of fruitfulness to being open to the possibility that a new person like Peter brings to the life of a church,” Jorgensen said. “I just can’t help but think, yeah, that’s how the Holy Spirit works.”

With a year left in seminary, Karanja has began to contemplate what the future of his ministry will be, likely on the deacon track.

If Jorgensen has her way, he’d return to Nebraska. She is in preliminary discussions with her church council, district superintendent and conference staff about creating a fulltime position for him to work with the church and the refugees in the Hanscom Park neighborhood.

After friends in the seminary made him wonder if Omaha was out in the middle of nowhere, Karanja says he loves the area and would be glad to return.

“I feel there’s a need for me to continue working with the migrant communities and the cultural church. One of the visions that Chris has is to make this church more intercultural,” he said. “It’s something that viable, and my experience comes in here. I’d be happy to be on board a church where everybody is invited and everyone is welcome.

“That is a beautiful call, and I want to be a part of that.”