In three years, the Lawrence-based Justice Matters has seen progress in the five key social issues that it sees as a priority. 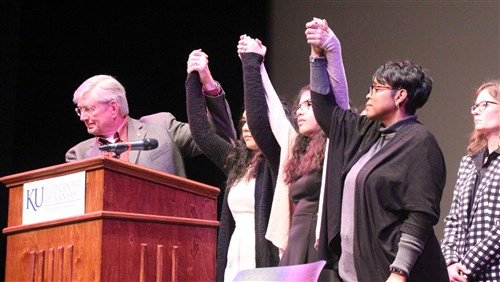 But, at its third-annual Nehemiah Action Night on March 30, all involved agreed it still has a long way to go.

Updates on the issues – childhood trauma and resilience, affordable housing, racial justice, mental health and jail alternatives – were presented to a crowd of about 1,500 at the Lied Center on the University of Kansas campus.

Clergy and laity from the Great Plains Conference were among those taking the stage to report on the progress. The Rev. Kathy Williams, associate pastor of First United Methodist Church in Lawrence, presented information about racial justice and affordable housing.

“We’ve made huge progress in a short period of time,” Williams said. “I’m very hopeful the city commissioners will find a revenue source that will make Lawrence an affordable place to live.”

Lawrence, Williams said, is the second most-expensive city in Kansas to live.

“We can turn that around,” she said. “Presenting the solution these people here want to see, we have a chance at that.”

Among the leaders of Justice Matters is the Rev. Sarah Marsh, a United Methodist pastor and chair of the Great Plains Conference Mercy and Justice team. She announced at the Nehemiah Action night that she is stepping away from her position as an organizer, a role in which she has served since the group’s outset, to return to full-time ministry.

“Justice ministry is a call from God, and so is pastoring and wanting to spread this ministry throughout the Great Plains,” said Marsh, who received a standing ovation. “I feel like it’s been a hybrid call.”

Marsh said she is proud of the progress that was made in the first years of Justice Matters.

“It’s exciting when you think we had 21 faith congregations working together,” she said. “Where else is that happening?”