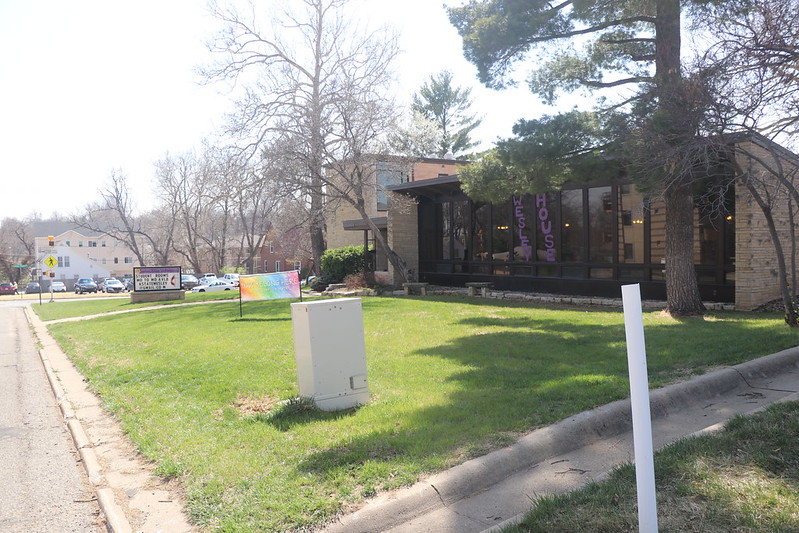 Many of the 100 people gathered to celebrate the building dedication for Wesley House at Kansas State University were asked to stand if they had been involved in the facility’s governing boards.

One by one they introduced themselves as they stood around the perimeter of the room and passed along a reproduction of a page with the word “mortgage” in large type.

The last in line was Dr. Dirk Hutchinson, immediate president of the Wesley Foundation, who took a lighter to the parchment and tossed it into a new stove in the commons area.

“That’s one small flame for the mortgage,” he said, paraphrasing Neil Armstrong, “one giant leap for Wesley House Ministries.”

Indeed, the April 10 ceremony for the K-State Wesley House, at 1001 Sunset Ave. in Manhattan, was a long time coming. A three-year “Finish the Dream” fundraising goal was reached July 13, 2020 — at the height of the pandemic.

“So much for celebrating when we wanted to do it,” the Rev. Jim Reed, a retired pastor and longtime leader of the Wesley Foundation, said at the gathering.

K-State Wesley has occupied the home, including residence rooms for as many as 40 students, since 2008, with the help of a drive called “Bridge to the Future” by the former Kansas East and West conferences.

The location was formerly occupied by the Delta Tau Delta fraternity.

“We had the building evaluated,” Reed quipped, “and also had an exorcism.”

Following the gathering, Reed said that $200,000 of the final $500,000 needed to pay off the building came from a donor who chose to remain anonymous.

“Through the years we had whittled off half of the indebtedness,” he said. “But we knew that was just going to drag on and on and on.”

Paying off the mortgage, Reed said, helps for improvements such as the new stove and flooring, as well as splitting the cost of a new roof with the Great Plains Conference.

Reed said what makes him the proudest of K-State Wesley is that at least 10 students living there eventually became ordained ministers during the past few decades.

Among those are the Rev. Lora Andrews, who graduated from K-State in 2011.

Andrews, now pastor of Lenexa St. Paul’s UMC, said she remembered “seeing the Methodist connection beyond what I knew growing up, and to realize it was expansive, and that there were people all over, and the love I received from my home church happened for everyone else, too.”

“It was a landing place in my life, and it was a place that loved me like my home church did,” Andrews added.

Andrews entered KSU with the intention of being a high school English teacher but changed her focus to ministry.

“I realized I spent a lot more time working on campus ministry things than my schoolwork,” she said. “I realized God was nudging me somehow.”

Chelsea Shrack, the K-State campus pastor, told the audience she appreciated the legacy of people represented at the reception.

“This victory belongs to so many people through so many years,” she said.

Shrack was a board member when the Wesley Foundation decided to purchase the current building. She then came back as an intern and returned from seminary five years ago to become campus pastor.

“I’ve seen it from every angle, and it’s been a joy,” she said after the ceremony.

After five years as campus pastor, Shrack will leave in June to become an associate pastor at Salina Trinity and University UMCs. She will be succeeded by the Rev. Mitch Todd, who will return to K-State Wesley after serving as its pastor from 2001 to 2006.

The Rev. Jenny Collins, superintendent of the Flint Hills District, told the audience that Wesley House shaped her as a student and as an adult on the foundation board.

“It has a special place in my heart,” she said.

After the ceremony, guests dug into vanilla and Purple Pride ice cream from the KSU Dairy at Call Hall.

Renee Snowden, Manhattan, is in her third year at K-State Wesley and said she loves the bonds she feels with her fellow students.

“As a college student, it’s a great place to connect to people with similar values,” said Snowden, a resident assistant. “As someone who lives here, it’s nice to know I’m not alone on campus, that there are people who are going through what I’m going through.”