While disaster response teams continue their work helping people impacted by flooding in Nebraska, the flow of the Missouri River is now prompting some evacuations in northeast Kansas.

Residents of the community of Elwood, Kansas, a border town along the Missouri River just west of St. Joseph, Missouri, and the eastern portion of nearby Wathena have been urged to leave before the river reaches what the National Oceanic and Atmospheric Administration (NOAA) believes will be the third-highest flood level on record in that area.

The county’s Department of Emergency Management told WDAF television in Kansas City that Elwood residents should use Roseport Road to East Highway 36 to leave the community. Ramps on Highway 36 into town have been closed.

The river is expected to crest later today in Elwood.

The Kansas Division of Emergency Management said a shelter has been opened in Troy, at 1225 Last Chance Road, and a pet shelter has opened at the Doniphan County Fairgrounds, 211 N. Boder St., in Troy.

“The potential for flooding is high in several counties and we will do what we can to support the counties to protect the lives and property of the people we serve,” Gov. Laura Kelly said.

Meanwhile, Great Plains Conference early response teams (ERTs) were expecting to wrap up their work Friday in North Loup, Nebraska, a town about an hour’s drive northwest of Grand Island that was hit hard by flooding a little more than a week ago. The Rev. Hollie Tapley, conference disaster response coordinator, said via text Friday that once work is completed in North Loup, a determination will be made on where ERT volunteers will be deployed next. 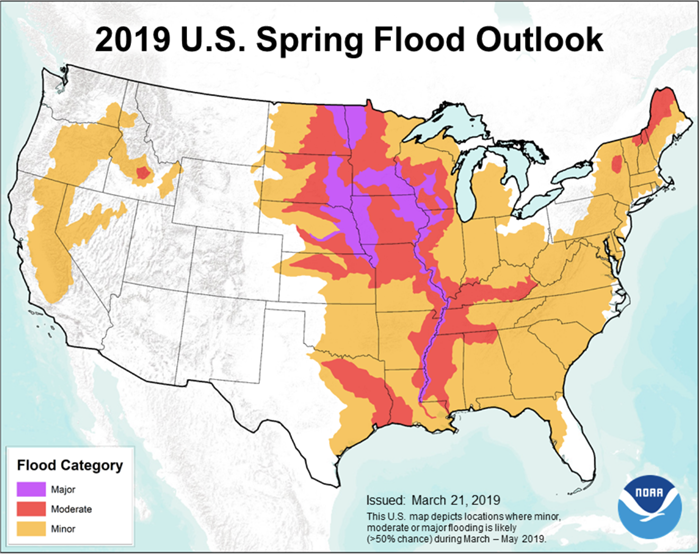 Unfortunately, the spring may be even busier than normal for disaster response volunteers. NOAA issued a spring outlook Thursday that said historic, widespread flooding could continue through May. The extreme cold from January and February froze the ground as much as 2 feet deep. Heavy snowfall into March, followed by rain, left water with nowhere to go but sit or runoff from frozen, saturated ground.

The report cited the extensive flooding in parts of Nebraska, Minnesota and Iowa. NOAA’s outlook map indicates the entire eastern border of Nebraska and the northeastern most portion of the Kansas border in the “major” flood category. The rest of the northern half of Kansas and all but the extreme southwest corner of Nebraska are in the moderate or minor category.

“The extensive flooding we’ve seen in the past two weeks will continue through May and become more dire and may be exacerbated in the coming weeks as the water flows downstream,” Ed Clark, director of NOAA’s National Water Center in Tuscaloosa, Alabama, said in a press release about the report. “This is shaping up to be a potentially unprecedented flood season, with more than 200 million people at risk for flooding in their communities.”

The flood risk outlook is based on a number of factors, NOAA cited in the press release, including current conditions of snowpack, drought, soil moisture, frost depth, streamflow and precipitation. Local heavy rainfall, especially associated with thunderstorms, can occur throughout the spring and lead to flooding even in areas where overall risk is considered low.

The Great Plains Conference’s disaster response teams will be deployed when requested by communities across Nebraska and Kansas, with two kinds of volunteer opportunities available. One is to serve on early response teams. ERT volunteers receive training from the United Methodist Committee on Relief (UMCOR) that helps them identify potential hazards as they work and provides training on particular skills, such as placing tarps over damaged roofs following tornadoes that can stay in place for months at a time.

Volunteers can help with some tasks apart from the ERT-required duties, usually in an area where a disaster has taken place after search-and-rescue operations have been completed and recovery needs have been assessed. Learn more about ERT training and requirements for volunteers in general.