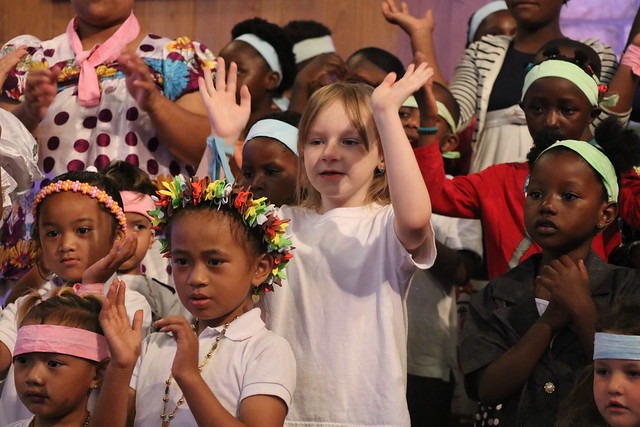 The Vacation Bible School program at Kansas City Bristol Hill United Methodist Church on July 14 was like many VBS wrap-ups, with youngsters hamming it up during the songs, kids waving to their parents in the congregation and older siblings watching out for their little brothers and sisters in the front row.

But unlike the other VBSs, Bristol Hill’s was a triad of churches and cultures – African and Micronesian children joined with the predominately white church that hosted the week.

The Rev. Bruce Draper is pastor of Bristol Hill and the nearby Metropolitan Avenue UMC.

Since Dec. 1, Metropolitan Avenue has been renting its church on Sunday nights to the Kansas Micronesian Christian Church.

Bristol Hill and Metropolitan had combined for VBS for several years, and Draper thought it would be good to add the Micronesian church.

“My goal was to kind of crosspollinate and each one help the other out,” he said. “We just all came together.”

The Metropolitan church has mostly refugees from the Democratic Republic of the Congo. Harper said he’s heard estimates that there are 10,000 Swahili-speaking refugees in Kansas City on both the Kansas and Missouri sides of the river.

“They sort of form a community for our Swahili-speaking force,” he said. “Quite frankly, this church is the center of their community. It holds them together in worship.”

The Micronesians have had a longer presence in the Kansas City area, Draper added.

The first night, 45 children attended. By the time the fourth of the five-night VBS began, the number had increased to 70.

“The Micronesians were a little surprised, but every night there would be more kids and more kids, and it got more exciting,” VBS director Sherry Hix said.

The program included a recap of the VBS, “Athens: Paul’s Dangerous Journey to Tell the Truth,” and included songs written for the week as well as some modern worship songs. The children from Metropolitan arrived with colorful headbands, while the Micronesian children wore wreaths of plastic flowers around their heads.

Though it wasn’t a concerted effort, Draper said the children began to learn about each other’s cultures from interacting.

“The more time we spend together, the more time we just rub off,” he said. “We all recognize we’re all people, and bottom line, we’re all Christians and all worship Jesus – and all sing and all love to have fun.”

Hix, who has been VBS director for more than 10 years, said the children made friends quickly.

“One little boy from our church told his parents (before the VBS program), ‘Come early, I want you to meet everybody,’” she said with a laugh. “There’s no way you could meet 60 people, but that was so cute.”

Mutabazi Patrick, who was born in the Congo and lived in Uganda before moving to Kansas City, brought his two children, Doriks and David, to VBS.

He said they loved the experience.

“They were happy and shining,” Patrick said. “It was very good.”