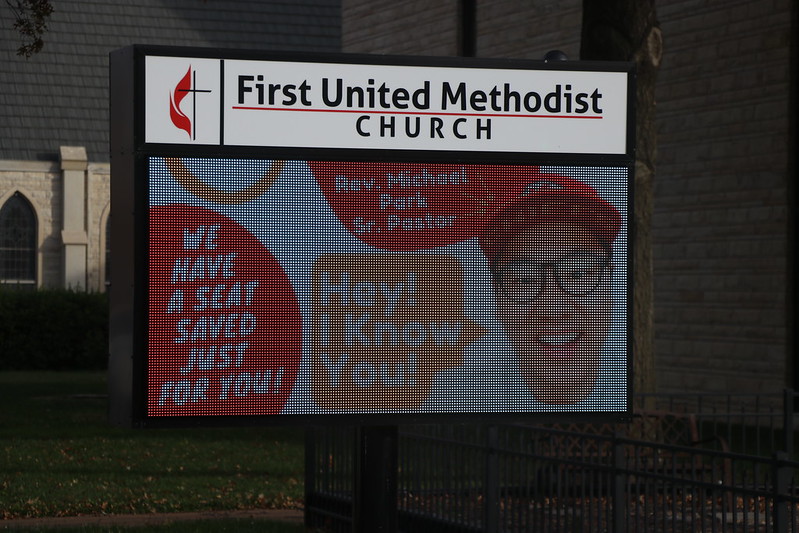 Two times during the early service at Chanute First United Methodist Church, the Rev. Michael Park asked the congregation to look amongst themselves, spot someone they’re familiar with, and repeat what’s become his slogan for ministry:

It’s that recognition of others, that sign of familiarity, and that reinforcement of their worth — both in person and on social media — that has endeared the South Korean-born pastor to the church and to the southeast Kansas community of 9,100.

“He actually walks the talk,” said Steve Parsons, chairman of the Staff Parish Relations Committee. “He gets out in the public, and he seeks people out, invites them, makes them feel valuable. That’s why our membership’s grown.”

Indeed, 56 people have joined the church since Park began as pastor, with another 20 promising to do so before the end of the year. Parsons said Park has baptized more people in the past year than in the previous eight to 10 years combined.

The unassuming Park, who has been in Chanute for 16½ months, said getting out into the community is the key to getting people into church and making disciples.

“People are waiting for people to come to church, and people don’t come,” he said while in his office, between Chanute First’s traditional and contemporary services. “My strategy is very simple — just go outside and meet people. I go to Walmart, go to different houses and meeting people and building up an authentic and real and legitimate relationship with people. They know what I believe, about who I am and about Christ’s love.”

Park, who had to find Chanute on a map after learning of his appointment, began at the church on July 1, 2020 — the church’s first in-person services since pandemic precautions began in mid-March. Eighty-one people attended his first service, and Park was told he was entering a time when attendance, finances and church morale were at low points.

Within a month, regular attendance had doubled and the church’s online worship, introduced during the pandemic, brought in an average of 350 additional views a week — as well as out-of-state offering contributions, many from viewers with no other connection to Chanute.

From his first days in the Neosho County community, Park was determined to get out and meet as many church members as possible, while keeping COVID protocols in mind.

He well-documented his meetings with posts on social media several times a day, generally tagging his photos #heyIknowyou. The phrase has even made its way onto Chanute First’s electronic billboard outside the church, along with a photo of Park in a Kansas City Chiefs cap.

Park is the first foreign-born pastor in the church’s 150-year history. Parsons said he and the SPRC were concerned whether its first cross-cultural appointment would be a good fit.

“We were concerned how he would connect the church — if he would be able to communicate with the church. All of our concerns were laid to rest when he got here. I don’t know of anyone who isn’t excited about him being our pastor,” Parsons said. “His personality is just so outgoing, and he makes everybody feel welcome and valued. It doesn’t make any difference if you’re 2 years old or 90 years old, he can relate to you and make a connection with you. And that’s very important.”

Marilyn Henderson, a lifelong member of Chanute First, said she loves Park because he’s “full of the spirit.”

“We are in revival time here. He has brought in younger people and children, which is what you need to keep going,” she said. “When he preaches, you can tell he’s in the spirit. I keep telling him one day I’m going to get up and dance, and you know it takes a lot for a Methodist to get up and dance.”

Carter was impressed that in Park’s early months in Chanute in ministry, he called groups of church members into his office and told them they could ask any question of him that they wished. She said that helped to erase any stigma about a pastor from a different culture.

Park’s willingness to be open on social media has caused a little consternation, Carter said.

“We’ve all made this pact, us older women,” she said with a smile. “If you ever get in the hospital, do not let him bring that camera in with him to visit you.”

Social media, Park said, has been an effective way to reach out to new people in the community.

“We put on not only our good stuff, but our struggles and pains,” he said. “Even people who don’t come to our church are engaged and connected.”

Part of Park’s endearment to the Chanute community, Carter said, is because of the pastor’s wife, Esther.

“They are true partners who work together in this ministry,” she said.

Often when her husband goes to visit parishioners, she will send along a baked treat — sourdough bread is a favorite, as are cheesecakes and carrot cakes.

“I pass off these goodies like Mahomes,” Park said of the Chiefs quarterback.

Esther Park has won contests for her baking and has been asked by several people to set up a shop in Chanute, but at the moment — with 5-year-old and 10-month-old sons at home — she has declined.

“A pastor comes to a church so people can feed spiritually,” he said. “My wife, in our community, feeds people physically, making these goodies.”

Carter pointed to the church’s 150th anniversary celebration earlier this fall, when Park volunteered his wife to make macaroons for everyone attending.

Park previously served from 2018 to 2020 as associate pastor at Olathe Grace UMC and said the suburban church atmosphere was different than the self-contained city he finds with Chanute, although to his knowledge there are no other Asian-Americans in the city.

The Rev. Kathy Williams is clergy leadership coordinator for the Great Plains Conference, with a focus on pastors in cross-cultural and cross-racial appointments. She said Park’s outgoing nature is serving him well in Chanute.

“He’s creating a space where he wants to be clear that everyone, no matter who you are, where you come from or how you speak …, that says you’re welcome here,” she said.

Pastors in cross-cultural and cross-racial appointments need to put themselves out into the community more than their Anglo counterparts, Williams said.

Williams first met Park when both were seminary students at Saint Paul School of Theology and said he has always had an outgoing personality.

“He more clearly understands that we are (different) but it doesn’t have to be a barrier,” she said. “We don’t have to continue to promote stereotypes or false assumptions, but we can celebrate who we are, and we become extremely intentional.”

Park said that although he was nervous about the reception he would receive as an Asian-born pastor, he has never felt less than welcomed in Chanute.

“As far as I’ve experienced, I’ve never had any racism or discrimination. They’ve made us very comfortable. I’ve never seen any unhappy or grumpy people. I just see people the way God sees them,” he said. “I’ve been here as a foreigner, learning language and tradition and culture. It’s a lifelong process. Life here as a foreigner is not an easy one. Every day you learn a new language, new culture, new tradition. That’s always challenging, but it’s always fun.”

In his sermon in mid-November, Park told the congregation about his upbringing in South Korea, with a “very conservative” Buddhist family that had high expectations of him.

“I am not enough,” he said he kept telling himself, motivated by fear and insecurity. He called himself “a black belt and a black sheep.”

“To be honest, when I was a little boy, I wasn’t a happy camper,” Park said in his sermon. “I hungered and thirsted for more.”

At age 13 at a church camp, he said, he found Christ and began his path to become a minister — “I fully realized God’s grace was knocking at my door,” he said — with his family eventually converting to Christianity.

Park fully plans to continue Chanute First’s growth in numbers and spirituality, beginning classes in Discipleship 101, 201 and 301 in 2022.

The pastor said he realized the outreach that Chanute First had during the church’s 150th anniversary celebration, which included a sermon by Bishop Ruben Saenz Jr.

“We realized that wow, we made a huge impact, we made a huge difference in our community. Not only growing in numbers, but prayers and impressions and gifts and service. We are growing in spirit, a very healthy spirit. Every Sunday I feel that,” he said. “They would like to do more mission and service, and that makes this a place I like to be.”