LEaD talks help pastors learn from each other

While corporate America has its TED Talks, or Technology, Entertainment and Design, the Great Plains Conference introduced LEaD Talks, or Leadership, Education and Discipleship, at the Orders & Fellowship clergy meeting Feb. 17-18 at St. Mark's United Methodist Church in Lincoln, Nebraska.

Seven pastors and one lay person from churches and colleges large and small in Kansas and Nebraska delivered the 10-15 minute talks to their fellow clergy, interjecting their own call stories, humor and life experiences. 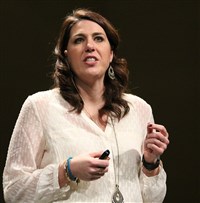 The Rev. Ashlee Alley, clergy recruitment and development coordinator for the conference, told of her career plans to become a physical therapist before transitioning into a ministry track while at Southwestern College in Winfield, Kansas.

"I knew all about how the heart beat," she said, "but I didn't know why my heart was beating." Alley used anatomy to illustrate the essential qualities of a pastor: Eyes (always open), hand (to be a mentor), heart (unique gifts and skills), bicep (spiritual nurturing) and smile (confirmation by the community). 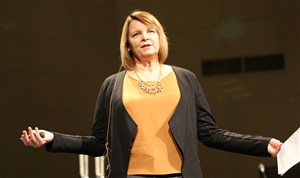 Cheryl Rude, the lone lay person to deliver a LEaD talk, spoke of her friends, husband and colleagues at Southwestern College who use their gifts and talents without being ordained nor licensed ministers.

"All of these people have an understanding of calling, and that's what they're living out," Rude said.
Rude emphasized that calling is not limited to clergy members and that everyone is called into service of some kind by God, with their various talents all being put to use. 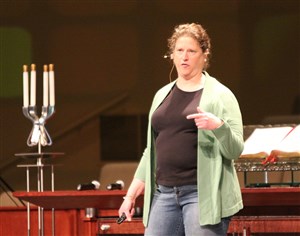 Rev. Stephanie Ahlschwede, pastor of South Gate United Methodist Church in Lincoln, combined sports metaphors and her love of Nancy Drew books as she went scouting in the church basement. She shared how both a dormant church league sports team and a disdain for small groups have turned into gatherings of volleyball and softball team members.

"They are not small groups," she said. "They are merely people who get together to do stuff," which propelled many of them into new and expanded roles in the church. 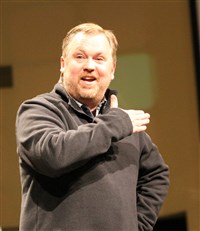 Rev. Craig Finnestad of Water's Edge United Methodist Church in Omaha spoke of the benefits of mentoring, where two of his charges have had a part in growing 50 small-groups meeting throughout the city.

Finnestad’s presentation included videos that featured interns describing how the experience has benefitted the church and them personally. Among the successes Finnestad shared was the way the young adult interns had helped start small groups that grew in popularity among people in their 20s and had helped invigorate worship. 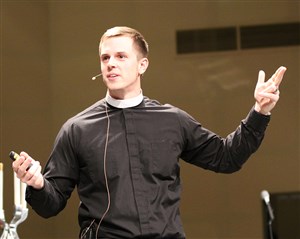 Mentoring also was the topic by the Rev. Aaron Duell of the First United Methodist Church in Columbus, Nebraska. He credits his mentor with his advancement.

"Most of our relationship was living life side by side," Duell said.

Duell talked about how having a mentor and lifelong friend provided him with the nurturing he needed to discern his call into ministry. He used a humorous clip from the movie "Nacho Libre" to craft his talk about how people can use a mentor's help to focus their calling into ministry. 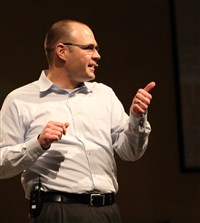 In a poignant présentation, the Rev. Jeff Clinger of First United Methodist Church in Topeka talked about his quick rise in the church and how redemption after an extramarital affair nearly cost him his marriage and his ministry.

Clinger talked about how his appointment to Church of the Resurrection and praise he received from the congregation there fueled his desire for recognition. It took nearly losing his family to help him realize the importance of returning to his calling.

"I can cling to my baptism and search for my call more than I ever did," Clinger said.

Clinger cautioned his fellow pastors not to let arrogance prevent them from hearing God’s ongoing call into ministry. 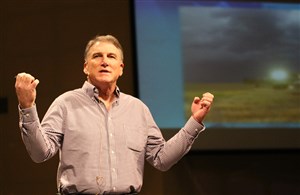 "Super Doppler Radar," Shane Britt pastor of the Emmanuel United Methodist Church in Abilene, Kansas, said, is so advanced that it can detect the intensity of a storm.

"We need to develop that kind of sensitivity," said Britt, who recalls being ignored by his pastor after he spoke at a youth Sunday and wanted to learn more about going into the ministry. Decades later, after careers in insurance and farming, he finally followed through on his call to be a pastor.

"Always have your Super Doppler Radar on," Britt added. 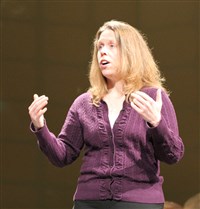 The Rev. Amy Lippoldt of the Basehor United Methodist Church in Kansas, said pastors and improvisational comedians both operate under the same philosophy of saying, "Yes, and ..." when dealing with various situations.

Lippoldt told a story to colleagues of a time she said “no” to an appointment and the anguish that decision caused for a brief time. Unlike improv, Lippoldt said, decisions made about ministry have long-lasting effects, and God sometimes helps people discern a call of “no.”

Read more about Orders and Fellowship.