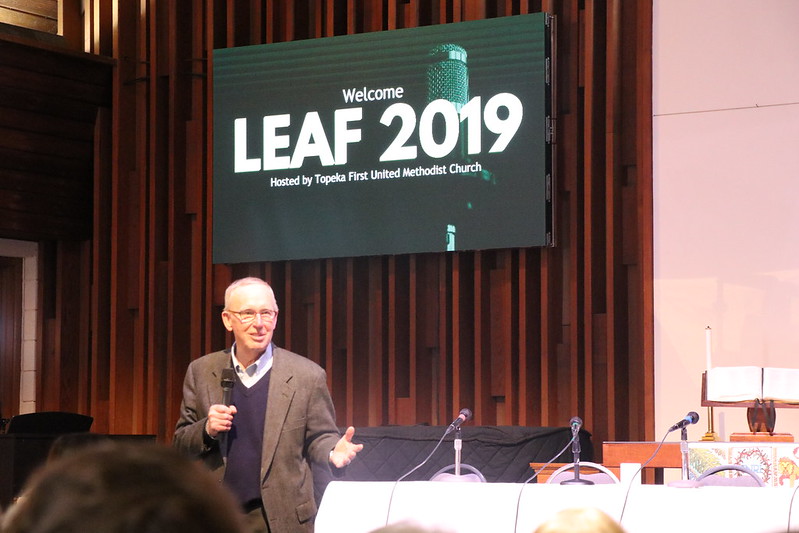 A change in the governor’s office fueled optimism among participants in this year’s Legislative Event for Advocacy and Faith.

“It’s a new day in Kansas,” said Becky Plate, Eudora, one of the organizers of the 45th annual LEAF day. “We have a new secretary of state and a new governor.”

The two-day session included legislative updates and a roundtable discussion of Medicaid reform, school funding and tax issues. Former Kansas Gov. John Carlin was the keynote speaker, and after the 90 participants had “lunch with a legislator” on Monday, they adjourned to more than a dozen workshops. Those workshops included “Meet a Muslim,” the Silver-Haired Legislature, foster care, Medicare, Medicaid, the League of Women Voters, mass incarceration and tours of the state capitol and the Brown v. Board of Education Museum.

State Sen. Carolyn McGinn, R-Sedgwick, said legislation including a new tax bill was “really churning on our side,” but compared it to being like the first quarter of a football or basketball game.

“We are trying to focus on figuring out where the money needs to go,” said McGinn, chair of the Senate Ways and Means Committee.

Two priorities, she said, are increasing pay for state road crew drivers, who start at $13 an hour and must have a commercial drivers license; and corrections officers, whose low pay and stressful conditions have caused massive turnover.

State Rep. Dennis “Boog” Highberger, D-Lawrence, a ranking minority member of the corrections and juvenile justice committees, said the former is taking steps to reduce the incarceration rate, including reducing the sentences of those with drug possession crimes.

“I definitely think that’s a step in the right direction,” said Highberger, an attorney.

McGinn added that proposed legislation would make Kansas the 21st state to formally outlaw the death penalty, although the state has not executed a prisoner since 1965.

“It may not get through the committee,” she said, “but we have to have the conversation.”

“If you don’t do things with love and intelligence, it’s all going to be for naught,” Kinnard said. “Love unites us in perfect union with God.”

A longtime performer in Wichita theater, Kinnard – the mother of NBC “Today” co-anchor Sheinelle Jones – began her presentation by singing the Gospel standard “Sometimes I Feel Like a Motherless Child,” and closed with Burt Bacharach’s “What the World Needs Now” and the spiritual “Love Lifted Me.”

“It appears what the Senate is trying to do is torpedo the governor’s budget right away,” he said.

Holman said Kansas, through its KanCare program, may join 36 other states — most recently Nebraska — that has expanded Medicaid.

“It is encouraging to us that this is continuing to happen,” she said.

“I’m grateful that we have a governor that understands the budget,” said Sister Teresa Bangert, one of the LEAF organizers.

Kelly and Vicki Schmidt, elected last fall as Kansas insurance commissioner, were two strong members of the Senate’s child welfare task force, Bangert said, and neither missed a meeting during their time in the Senate.

Carlin, who held the state’s highest office from 1979 to 87, encouraged those attending the sessions to get involved in government.

“If we don’t work and put an army to support these causes, we’re going to be in trouble down the road,” he said. “If we don’t get better at civic engagement – and I mean really better – the future looks pretty bleak.”

Carlin said he is optimistic about Kelly’s future as governor but is concerned about roadblocks in the house and senate.

“We’ve got the right governor, but we don’t have enough votes to get done what should be done,” he said.

Carlin, who teaches classes in executive leadership and practical politics at Kansas State University, said he urges the younger generations to get involved for their future.

“We’ve got to have people like you, motivating other people to get involved,” he said.