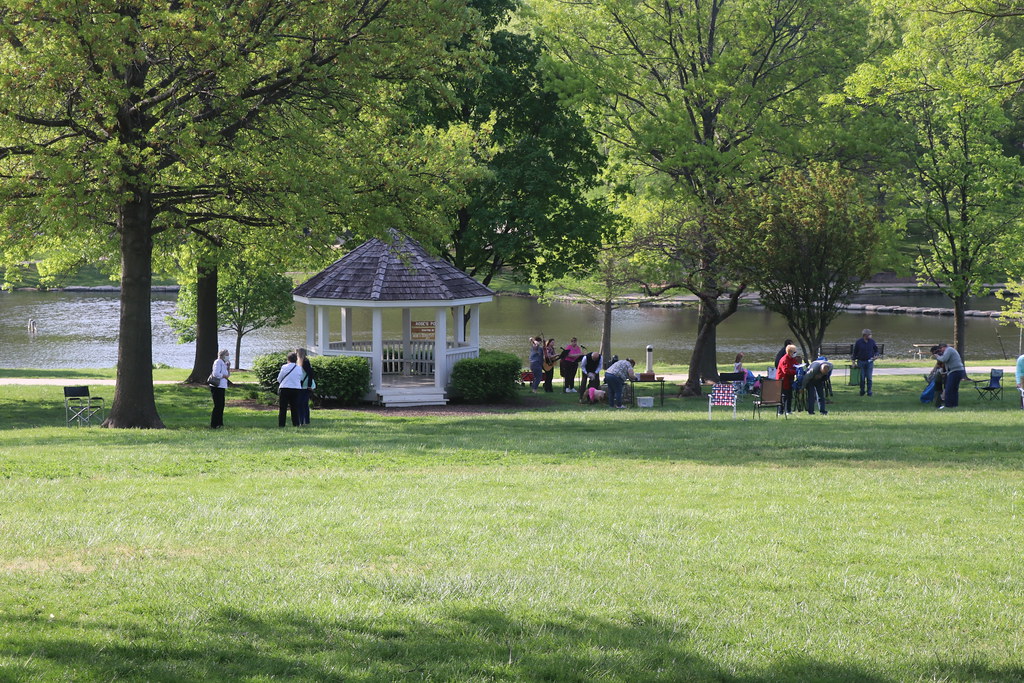 For 35 years, members of Lenexa United Methodist Church have grabbed their lawn chairs and made their way to Sar-Ko-Par Trails Park for an early-Sunday morning worship.

While the outdoor worship was previously limited to a few weeks, beginning on Father’s Day, recovery from the pandemic has the church expanding its schedule, beginning this year on May 2.

“Of course, during the pandemic everybody can scatter out and feel safe,” said the Rev. Jan Hayen, a retired pastor filling in for the Rev. Ezekiel Koech while Koech and his family were vacationing in his homeland of Kenya.

“When I was here, it was just a really good time,” he said. “Certain people really gravitate to this.”

Among those who gravitated was Connelaine Gustad, who last year was on a walk in the park.

“I just happened to walk by, and I heard ‘Amazing Grace’ being played, and thought I’ll go over and check this out,” she said. “Now I’m a member, and I’m an usher today and helping with Bible School.”

The 8 a.m. service, which the first Sunday back drew about 30 people, is a staple along with two services in the Lenexa church’s sanctuary.

The services take place in the same spot at the park, just off 87th Street Parkway and Lackman Road in Lenexa, a Kansas City suburb. It’s located down a gentle hill near a gazebo, although the worship doesn’t take place there, and next to the sizeable Rose's Pond.

Acoustic musicians provide the hymns — on this day, “Do Lord,” “Here I Am, Lord” and “Break Thou the Bread of Life” during communion. The sermon is identical to what those attending in the church building hear.

Among the appreciative outdoor congregation members are Brad Steinle, who has been attending since 2002.

“I just love being outdoors. I love the way the sunlight reflects on the pond,” he said. “It really connects with me from a worship perspective.”

Klaus Jarr, who has been attending for most of the 35 years, said the sight used to be even better.

Reflection off the water provided a memorable moment for Peggy Richardson when she was attending with her mother-in-law.

The reflection from the pond made it look like the sidewalk had disappeared, leading her mother-in-law to declare, “They’re walking on water!” recalled Richardson, who has attended the park services throughout their history.

“Worship in the Park” was started by the church’s pastor at the time, the Rev. Ron Holland.

In a video interview conducted by the church, Holland said the worship service was an answer to dwindling attendance in the summer.

Richardson said those attending felt like they were taking a chance with outdoor services.

“Let’s just see what happens. Thirty-five years later, we’re still doing it,” she said. “We didn’t know at the time whether it would work or not. As time went on, people started to do it. It’s good for newcomers because its casual, and kids can play around.”

Attendance during the summer has reached as many as 100 people, according to the church.

Through the years, Richardson said, the services have dealt with the array of problems at an outdoor worship, including sudden rainstorms, gusts of wind and sirens from emergency vehicles. The latter two happened May 2, as wind during the sermon scattered the bulletins and their inserts around the area, with children rushing to pick up the pieces, and two fire trucks making their presence known.

For many, the outdoor services allowed them to return to worship together without getting too close to one another.

About half of those gathered were wearing masks.

“I like the masks, but I like to see your faces, too,” Carol Sanagorski, the liturgist and singer with the Park Players band, told the outdoor congregation.