LPI: ‘This place is about changing lives’ 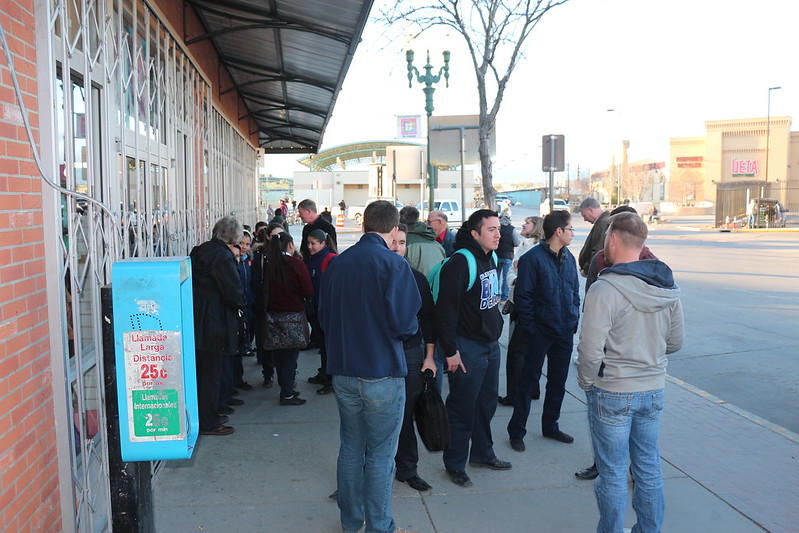 A chapel filled beyond capacity with high-schoolers greeted Raquel Resendiz like she was a rock star when she returned to the Lydia Patterson Institute in late January in El Paso, Texas.

Resendiz, who graduated from the United Methodist Church-funded private academy last spring and is a freshman at Southwestern College in Winfield, Kansas, came back to the school with a delegation of about a dozen clergy and parishioners from the Great Plains Conference, led by Bishop Scott J. Jones.

She sees students who are like she was – some from the impoverished neighborhoods of El Paso, others from the even more desolate area of Juarez, Mexico, which is connected to America by a 400 yard-long bridge. Some walked into the doors of Lydia Patterson as Christians. Others had a relationship with Christ that was tentative at best. But all of whom eventually have career dreams of becoming engineers, doctors and United Methodist pastors.

“The thing I like most about this school is that we can think of it as a safe haven to get away from the problems we have at home,” Resendiz, who read the Scripture during the daily chapel service, said the night before. “I think it’s a privilege to be here because not everyone can be here.”

On the surface, it’s far from an ideal setting.

Nestled in the Segundo Barrio of El Paso, Texas – not many years ago, the second-poorest zip code in the country – Lydia Patterson has given an education, a spiritual foundation and hope to students on both sides of the border for 103 years.

“This is one of the beacons of hope for both American citizens and Mexican citizens,” said Richard Hearne, Lydia Patterson’s director of development.

Along with the Zimbabwe East Conference and the Oklahoma Indian Missionary Conference, Lydia Patterson is one of three multicultural mission partnerships for the conference that is part of a challenge to the Great Plains churches for a fundraising goal of $100,000 each by the time of the end of the annual conference on June 4 in Topeka.

One-third of the funding for the Lydia Patterson Institute already comes from the South Central Jurisdiction of the United Methodist Church, an eight-state region that includes the Great Plains Conference.

The drive for funds comes as Lydia Patterson is in the first stages of a four-phase, $15 million renovation project that includes a larger athletic center that also houses the music and fine arts departments, a larger chapel and improvements to the lunchroom, kitchen, high school classrooms and library.

Work already completed has come in the seventh- and eighth-grade classrooms, where state-of-the-art smart boards illustrate the lessons, and students use computer tablets to send their homework to “the cloud” rather than traditional textbooks. It’s an advancement the El Paso public schools are far from making, Hearne said.

Lydia Patterson students have the results to back up the need. Its graduation rate is 98 percent in the past decade, and 100 percent over the past three years. Ninety-five percent of those graduates go on to post-secondary education at a variety of public and private colleges and universities, including several United Methodist-based schools in the Great Plains.

Graduates are offered scholarships through churches as well as the colleges and universities.

“It’s a win-win situation,” said Dr. Socorro de Anda, in her 21st year as president of Lydia Patterson. “The church gets resources for Hispanic ministry, the college gets to connect with the local church, and the student gets to go to college.”

Scholarships are also how many of the Lydia Patterson students are able to attend school. But thoughts of “scholarship students” as those coasting by with a little money on the side are dashed once the institute’s students are in view. Students on a full scholarship must work for two hours a day at the school, an hour for a half-scholarship. There are also “scholarship-plus” students, who receive not only a paid education but the cost of their student visas and funding that covers the bus ride from Juarez to the Stanton Street Bridge, which goes over the Rio Grande River.

Seventy percent of the 435 students at Lydia Patterson cross the border to get to the school.

When Ernesto Morales came to Lydia Patterson three years ago for a job interview as the principal, he said he assumed that the students he passed by scraping gum off the sidewalks were in some sort of trouble.

Instead, he was told, they were scholarship students.

Students crossing the border are leaving Juarez, which was once called the “murder capital of the world.” Decades ago, students told of hearing gunshots on the sidewalks in front of them, prompting them to just cross the street rather than get caught in the crossfire.

“I drive to work every day as if I was going to a mission field,” Morales said. “This is a safe haven.”

‘Give them the best’

The building that currently houses the Lydia Patterson Institute was built in the mid-1960s, and while the brick exterior is structurally sound, its age is showing inside, where ceilings are ready to buckle and where technology and enrollment are growing at a pace faster than can currently be handled.

Six new classrooms are part of the renovation plan, including a chemistry lab that has neither running water nor gas for Bunsen burners – experiments are done by observing video monitors. The computer system was part of the first renovation, where Hearne said technology was “laughable” three to four years ago.

The improvements, de Anda said, would give an even greater launching pad for Lydia Patterson students to go on to careers that improve lives both in the United States and Mexico.

Learn what the Great Plains delegation on the Lydia Patterson Institute thought of the trip.