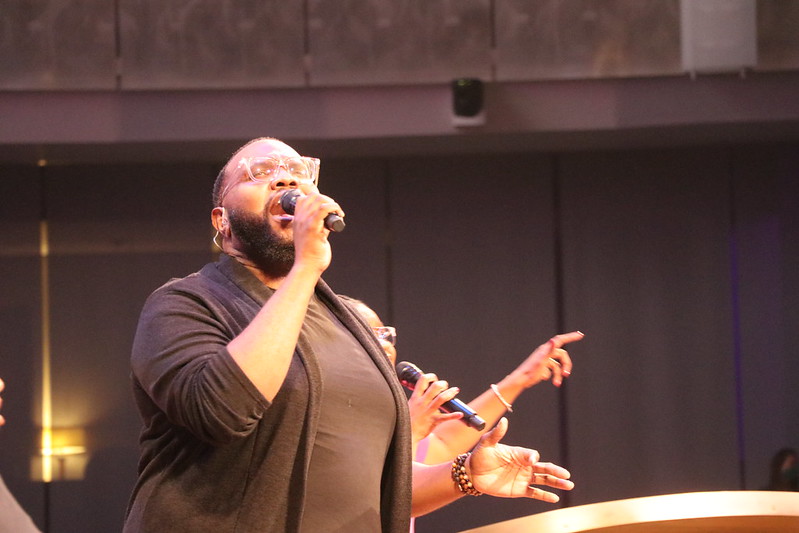 The United Methodist Church of the Resurrection’s 23rd annual Leadership Institute spoke to churches who were bruised but not broken by the pandemic, ready for a restart and seeking encouragement to return and revitalize their missions.

Because of COVID concerns, a 500-person cap was made on in-person attendance at the sanctuary in Leawood, while more than 2,000 registered to watch online. Those attending in person kept on masks throughout the institute except while eating or drinking.

Adam Hamilton, the church’s founding pastor, said he was trying to promote vaccination against COVID as “an act of discipleship,” even though he received backlash from some church members. He showed photos of spray-paint vandalism at the campus reading “Church of the Vaccination” and “I need a pastor not a doctor — I’m out.”

“It’s been a challenging time to be a church and to be the leader of a church,” Hamilton said at the beginning of the Leadership Institute, Sept. 29 to Oct. 1.

Hamilton, who gave the attendees a preview of his book on the Lord’s Prayer, to be published in December, said churches in the United States were more polarized in the 1880s than they are now, but their differences were overcome.

“COVID would have been a great chance for us to have a common enemy,” Hamilton said. “But it didn’t work out that way.”

The Rev. Dr. Kevin Murriel, pastor of Atlanta Cascade UMC, said the impact of last year’s killing of George Floyd by a white police officer in Minneapolis hit home immediately as he was watching the footage on his computer.

His 4-year-old daughter entered the room, Murriel recalled, saw the video and asked, “Dad, is that you?”

“I refused to have my daughter fear for her life because of the color of her skin,” he said.

Murriel, leader of the 7,000-plus member church in Georgia, said leaders must make racial justice and racial reconciliation a top priority.

For too long, he said, churches have based themselves on exclusivity rather than inclusivity.

“I’m telling you brothers and sisters,” Murriel said. “That ain’t going to work.”

Murriel repeated the quote that 11 a.m. Sundays is still the most segregated hour in America.

“The world is becoming more diverse, and so is America,” he said, “but the church isn’t. … When culture changes and the church doesn’t, the inevitable is going to happen.”

Hamilton said that Church of the Resurrection has made changes to its structure, shortly before Floyd’s 2020 murder, to improve its racial justice, including naming a longtime pastor, the Rev. Cheryl Jefferson Bell, as community justice director and creating a statement on racial justice.

Hamilton said the racial justice efforts has led to the loss of about 300 members from the church, he said.

But others have joined, saying “that’s a church I want to be a part of,” he reported.

Church by the numbers

The first years of the new millennium saw a steady increase in church membership, said Savannah Kimberlin, director of research solutions for the Barna Group.

But the downward trend began from 2008 to 2010, the same time as the first iPhone was introduced, Facebook’s popularity exploded, millennials were entering adulthood, the 2008 presidential election took place, and the 2007 economy entered a recession.

“All of the necessary ingredients were put in the blender right about at this time,” Kimberlin said.

Church attendance was starting to recover just before the pandemic, she said, and has not yet recovered.

In a September 2020 Barna survey, 19% of those who considered themselves practicing Christians had not been to church since the beginning of the pandemic. The same percentage held for those polled in May of this year.

“They have completely pulled away,” Kimberlin said. “It’s not fringe participants, it’s many of our faithful.”

Of those who had been churchgoers, 55% are waiting to return until things are “back to normal.”

Kimberlin, who self-identified as a millennial, said millennials accounted for 20% of current church membership.

“It’s a minority, but it’s a noble minority,” she said.

She said mainline denominations are faring better than non-mainline, with 39% of mainline attendees reporting attending church in the previous week.

“You have done well. You are tired. And this is the narrative you have not been told,” Kimberlin said. “Maybe we’re in a better spot than we thought.”

Forty percent of churches reported that they see their future in continuing to be a hybrid of live and digital worship.

Hamilton said online attendance has skyrocketed for Church of the Resurrection during the pandemic.

“They can access worship whenever they want to,” he said.

Churches have work to do, Kimberlin said, for a digital prayer strategy and for digital discipleship and digital evangelism. Hamilton said much discussion has been made among United Methodist leaders about a correct means for digital communion.

“We are bound together, even if we don’t see each other at the moment,” he said.

“This jumps into our realm to talk about faith,” Hamilton said. “Most of our congregations are so demoralized they don’t believe they can win anymore. … You’ve got to help people believe in themselves.”

Hamilton showed several clips from the series, including Lasso asking a player if he knew what the happiest animal on earth was: the goldfish. “They’ve got a 10-second memory,” Lasso said.

“Be a goldfish — let it go,” Hamilton said. “Even if he did make (the fact) up, it’s still a good coaching technique.”

Another clip showed Lasso telling a moody star player to “turn that me into us.”

“You may be a star player, but out here we’re a team,” Hamilton said. Hamilton pointed to God using David, Abraham and Moses “even though they weren’t star players.”

“We move too quickly to judge other people,” Hamilton said. “We fail to be curious about what gifts they bring to the table.”

Hamilton also showed a video clip of his interview with Donnie Campbell, who coached Sudeikis in basketball at Shawnee Mission West in Kansas and inspired the Ted Lasso character.

“You always have to begin with the end in mind,” said Campbell, a Lyons, Kansas, native who now coaches at Lee’s Summit North in Missouri.

“We fly under the banner of Christ, and it means everything or it means nothing,” he said. “It can’t just mean a little bit.”

Goff, a lawyer, motivational speaker and author of five books (plus their journal versions and children’s editions), wrapped up the Leadership Institute with the thought that the purpose of life should be “love, purpose, connection — and a few authentic relationships.”

Getting to know people is the best entry point for discipleship, he said.

Think of how Jesus treated people as a model, he said.

“Kindness and respect,” the lawyer said, “is a case you’re never going to lose.”