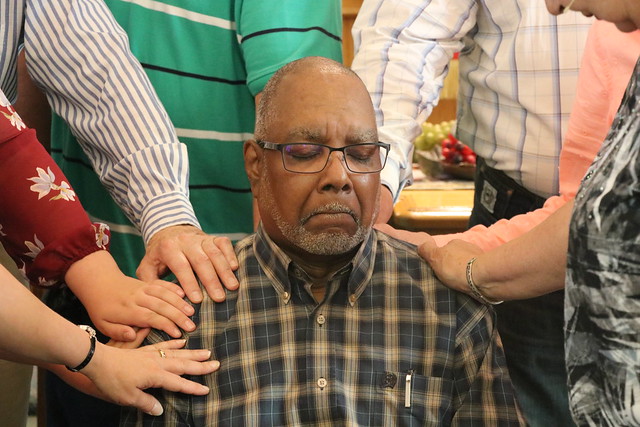 Like about a hundred other churches in the Great Plains Conference, McCool Junction United Methodist bid farewell to its pastor during services on June 16.

But the central Nebraska church was not only celebrating the retiring Rev. Ralph Gaines, who helped the church triple its membership over his six years, but the launch of ministry for church member Jenice Epp, assigned to churches in Bassett and Springview in north-central Nebraska.

“You’re never too old to change professions,” said the 63-year-old Epp, who had worked for more than 20 years as a speech-language pathologist in nearby York.

Population 400, McCool Junction’s three churches — United Methodist, Catholic and Lutheran — all sit within a block of each other. During Gaines’ six years, more than 80 members have joined the church.

“When I got here, the most important thing I saw was getting the people here motivated and excited about ministry,” Gaines said. “They weren’t as excited when I got here, and once I got here, the excitement came into the church family. Everyone just started doing things.”

He said the church is a reflection of the town.

Gaines, now 66, stood out in the community for more than just his energy — he was the only black person in the town.

When told by his district superintendent, the Rev. Lance Clay, that he was being considered for the all-white town, “I told him I don’t have a problem pastoring anywhere,” Gaines recalled. “The only problem I have is if they’re willing to accept me.”

But church members said that’s never been a problem.

“The community’s really accepted him and loved him,” Ken Real, a longtime church member, said of Gaines.

Gaines, Real said, opened up his life to the congregation in early years, including the grief of losing one of his sons.

That brought comfort to Real, whose son died in 2014 from alcohol poisoning during a fraternity freshman hazing at the University of Nebraska.

“We were friends before, and I gained a lot of respect for him as a pastor,” said Real, pointing out Gaines’ master’s degree in alcohol counseling. “We found out we had a lot of common ground after we got to know each other.”

Real, who remembers when the McCool Junction church was down to about 20 people, said Gaines got many people involved in the service, including himself.

“I wouldn’t imagine five, six years ago standing in front of the church and doing the things I’m doing,” said Real, who fielded the joys and concerns from the pulpit during Gaines’ last Sunday at the church. “Pastor’s just always called on us to be our best for the glory of God and the good of the church. His spiritual guidance has just meant so much to this church.”

Although Gaines’ final sermon at McCool was preached the week before, he was brought up front several times during the service for gifts and a laying-of-hands to bless him. Though he is retiring, Gaines will return to Omaha Living Hope UMC on July 1 on a half-time basis. He helped start Living Hope, in a poverty-stricken north Omaha neighborhood, as a church planter.

An Arkansas native, Gaines became the pastor of a Baptist church in Little Rock by age 17. He was ordained in 1990, and by 2002 changed denominations to United Methodist, admiring the UMC’s peace with justice ministries, open communion table, one baptism and what he calls its “try it before you buy it” philosophy, where individuals don’t have to be church members to be involved in the choir or volunteering.

Any apprehensions about being the only person of color in the town, Gaines said, melted as he met two of the members of the Staff Parish Relations Committee before his introduction to the entire group.

“They have been very loving from the very first day. There have never been any concerns here,” he said. “I could come in and concentrate on ministry. I haven’t had to put out one fire here. I don’t have any triangles here. I haven’t had any of that stuff here. I look forward to coming to Ad(ministrative) Council, because people are so loving here. When we leave Ad Council, we leave the same way we come in, smiling and laughing.”

Gaines ushered in a welcoming spirit in the church, Epp said.

“There’s one family who came here who said they had belonged to another church for two years and nobody there knew their name,” she recalled. “They came here one Sunday, came back two weeks later and everybody remembered their names. He’s just been an inspiration to all of us.”

“When he came, he broadened our horizons. It was OK for us to be active again. He gave us his blessing to us being active again,” said Plock, the church secretary, lay leader and a certified lay speaker who gave a sermon on “Bends in the Road” on June 16.

Plock said her relationship with Gaines has been “like an old married couple” from the start, and she admires his sense of humor.

“Pastor G’s fun,” she said. “When we have skits (for children) that involve God, he’ll go offstage and (speak) in a Barry White voice. He’s allowed us to be who we are.”

Plock said Gaines has encouraged the weekly afterschool program called WLC — Work for Christ, Live your faith, Care for each other — which has drawn young families to the congregation.

Plock, Epp and Real said Gaines has been welcoming to everyone in the congregation, including a gay couple who said they had felt outcast from their previous church.

“He has been an inspiration to all of us,” Epp said. “He was very good at delegating and getting other people to get involved.”

Epp took it upon herself to be a greeter at the church several years ago, and Gaines encouraged her to take over the children’s time portion of the service.

Two years ago, she began a basic lay speaking class. “During the next month, I woke up every morning with a whole message. I kept saying to God, ‘Why are you giving me this?’”

Her involvement began to grow after visiting an orphanage in Bolivia as a volunteer in speech therapy, where she brought a 6-year-old girl nicknamed “Little Annie” back for life-saving brain surgery.

“I think the turning point for her was when she brought Little Annie back. That just kind of pushed her,” Plock said. “I have known her for 20-some years, and for the past 10 years I have told her she’s missed her calling.”

“As ancient as I am, I have finally learned that you have to say yes, because you just have to,” she said. “I’m the one, at the end of my life, who has to answer if I did His will or not.”

Epp said she is “excited and scared,” about half of each, with her new calling.

Seasons change in The United Methodist Church, and now the McCool Junction congregation is ready to welcome Rev. SeungLi You, a 28-year-old, Korean-born recent graduate of the Perkins School of Theology, as its new pastor.

“They already love this guy and his wife,” Gaines said of his successor. “He’s gonna be able to take this church to a place where even I couldn’t take them.”