In June, Margi Ault-Duell and Hugo Perez Trejo, social justice educators with years of experience working at Mexico’s borders to the north and south, spent time with the Micah Corps interns and also offered events at First United Methodist Church in Hastings, Trinity UMC in Grand Island, and First UMC in Omaha. This was made possible through the Mercy & Justice Team and Peace with Justice Ministries.

Ault-Duell, who is working for a non-profit organization in Kansas now, worked several years with BorderLinks, an organization offering immersion trips at the border between Arizona and Mexico. Trejo has been working in southern Mexico for a human rights organization. Part of his work included identifying the DNA of migrants who had died so relatives could bury their remains.

We each have our own immigration stories, having moved for family, education or work-related reasons. And for most of us, our ancestors came from other countries. Human history is a story of migration. Borders have been and are constantly changing. Participants were reminded that God’s world does not have borders.

Parts of the video “The Invisibles” (available on YouTube) was shared, documenting the harsh and cruel reality people are facing who travel from Central America north through Mexico with the goal of reaching safety in the United States. The majority of those embarking on this dangerous journey feel they have no choice and that fleeing to the north is their or their family’s only chance to survive. Small-business owners are often forced to pay monthly bribes to drug cartels or gangs. Children and youth are forced to join gangs being threatened with death if they refuse. Involvement of our U.S. government in the countries to our south is undeniable and has often contributed to the instability of the governments there. The North American Free Trade Agreement, or NAFTA, in 1994 had terrible consequences for thousands of small farmers in Mexico who lost their livelihoods. At the same time this trade agreement went into effect, our government started several programs aimed at protecting our southern border. It was known on both sides of the border that NAFTA would cause an influx of people heading north to look for work and a way to provide for their families. 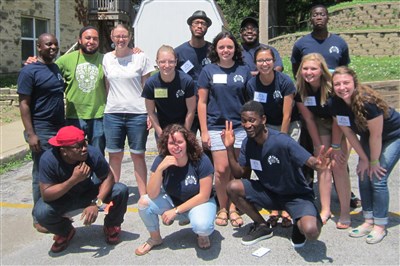 Ault-Duell and Trejo reminded participants of the importance to know world history. The beliefs in Manifest Destiny and American Exceptionalism have influenced the U.S. westward expansion. Texas was part of Mexico before the Mexican- American war from 1846-1848 when the U.S. invaded this part of Mexico.

The number of deaths along the border is high, with 2,269 deaths recorded from 1999 to 2012 just at the Tucson sector of the Arizona border. Several non-profit organizations work hard to help migrants by providing water and first aid in the desert. Their work includes establishing relationships with border patrol agents. But these are often moved from one part of the border to another, making this work more complicated.

As Christians we are concerned and troubled by so many fleeing hunger and violence with a high percentage being raped, kidnapped, trafficked or dying on their journey to safety. Statistics show that six of 10 girls and women traveling north are raped during their journeys.

So what must we do as Christians, hearing the call from God to love our neighbors as ourselves? We need to look at the root causes for migration in different parts of the world, for the consequences of these causes and then look for possible solutions. It is crucial to listen to those impacted directly, what their experiences are and what they see as possible solutions.

Ault-Duell and Trejo encouraged looking at the big picture (what changes do we need to work for in regard to immigration reform) as well as immediate needs in our communities.

“Know yourself and discern where you can best put your energy,” advised Ault-Duell. There is so much to do and we cannot do it all. But if we join together and each work with the gifts we have been given by focusing our energy, we can make an impact.

Many in the Great Plains Conference are in ministry with immigrants and refugees. Consider sharing your stories, so we can learn from each other.

The Great Plains Refugee Task Force will be offering another webcast at 6 p.m. July 10 about welcoming refugees. The livestream will be available starting at 6 p.m. that night at www.greatplainsumc.org/livestream.

If you have questions or want information about working with refugees, contact the Rev. Hollie Tapley at htapley@greatplainsumc.org.